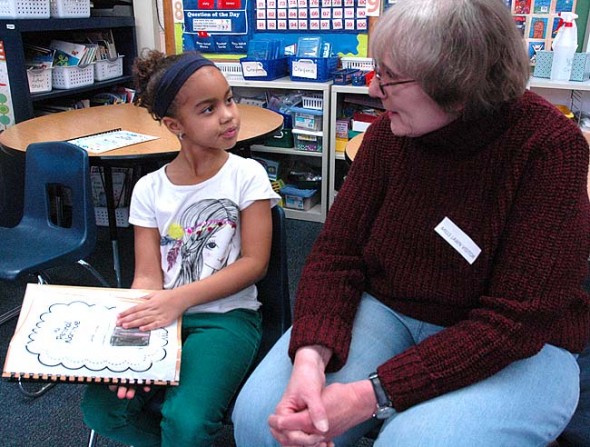 Mills Lawn second-grader Lillianna Sylvester showed her original story to Nancy Hirsch during last week’s Memories Party at the school. The party was the culmination of a project-based learning project aimed at developing empathy in youngsters by sharing memories with Yellow Springs seniors. (Photo by Matt Minde)

It may not be obvious that Zach Underwood, age 8, and Helen Eier, age 85, have things in common, but they recently discovered they do. For instance, they both like cats. They like camping. And when Helen described sliding down the big banister in her school when she was a kid, Zach knew exactly how much fun she was talking about.

“On Scooby Doo, they’re always trying to get away with that,” Zach said, after Helen shared her story of mischief.

Zach and Helen discovered these commonalities at a Memories Party on Dec. 3, hosted by the Mills Lawn Elementary School second-grade classes. At the party, held in three classrooms, about 60 second graders shared stories with 30 local seniors. Some seniors were paired with a single child, while others spent time with two.
Peyton Jones, another second grader, and Lin Wood also found shared interests. For instance, they both have younger siblings. And their favorite land animal is the horse, while their top water animal is the dolphin.

The culmination of a several-week project-based learning, or PBL, project, the Memories Party was overseen by MLS second-grade teachers Debra Mabra, Heidi Hoover and Jessica Liming. The three teachers created the project as a way to help their students develop empathy and understand more about those who are different than themselves, Mabra said.

And they hope that the project is only the beginning of an ongoing relationship with local seniors.

“We’re so close to the Senior Center, we can walk there,” Mabra said. “It’s like having the gift of the Glen nearby. The Senior Center is another gift.”

Mabra and the other teachers developed the project after thinking about how many children these days have grandparents who live far away. Things were different for Mabra, who grew up living in a three-generation household, with her grandmother in the same house.

“A lot of people these days are isolated from young people,” she said.

The party itself was preceded by several weeks of study during which students learned more about memories and sharing their stories with others, according to Mabra. Starting with reading a book by Mem Fox about a little boy who lives next to a nursing home and makes a friend there, the class considered what makes a memory. They then each wrote a book sharing their memories of something important in their life. The book process included becoming familiar with the writing stages of drafting, giving and getting feedback and doing revision. Then they brought their books to the Memories Party, where each child showed her or his book to a senior partner, who shared memories in return.

Of course, many of the seniors’ memories illuminated a world the second graders had never known. Eier brought in a photo of her grade-school class that showed all the girls in skirts, because they weren’t allowed to wear jeans or pants. And she described her school’s big bell with a long rope hanging down, which the janitor pulled at the end of the day. Sometimes the kids helped pull the rope, Eier said, and though Zach’s school didn’t have such a bell, he was interested.

“It would be sort of like a merry go round,” he said.

But perhaps most surprising and satisfying was discovering how much the young and old shared.

“I like how many things are the same,” second-grader Peyton Jones said after her interaction with Wood.

A hallmark of PBL is students collaborating with each other, and the Memories Party offered a variety of opportunities to work together, according to Mabra. The book writing project included peer review, receiving both “warm” and “cool” feedback on their work from their classmates. And the project also involved the children working together to prepare for the Memories Party, complete with refreshments. Their teachers talked with them about the importance of showing interest in others and about how to ask questions.

In the end, the children came through, according to Eier, who noted that it’s a bit unusual to have such one-on-one time with a child.

“I was very impressed with the degree of ease and comfort they had, and their politeness,” she said. “It was very enjoyable.”

Mabra, too, was pleased with the outcome.

“The students were genuine, kind and interested,” she said. “They stepped up.”
At the end of the party, the children were asked to walk their senior partner down the hall to the school’s front door. Watching, Mabra saw one little girl slip her hand into the hand of the woman she was paired with.

“It was heartwarming,” Mabra said. “I hope this is just the beginning, a door opening between the school and the Senior Center.”