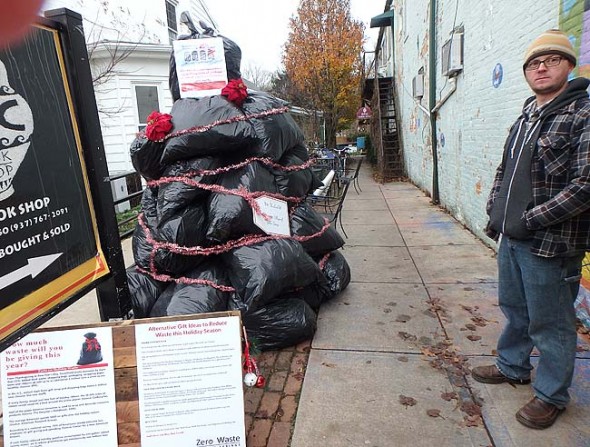 Tom Clevenger, a member of Zero Waste Yellow Springs, a group affiliated with the YS Resilience Network, stands next to the “Trash Tree” they created to raise awareness around issues of consumption and waste during the holidays. The tree, made of trash bags stuffed with newspaper, proved surprisingly controversial. Erected in the alley next to the Emporium, it was up for just four days last week; it was damaged and, ultimately, dismantled before group members took the remainder of the tree down last Thursday. (submitted photo)

‘Trash Tree’ irks some, inspires others

Activism or eyesore? Statement or nuisance? Needed or not?
These were some of the questions raised by last week’s “Trash Tree,” an installation created by Zero Waste Yellow Springs, a small group affiliated with the YS Resilience Network that formed about a year ago. According to Vickie Hennessy and Tom Clevenger, two of the group’s members, the “tree” was erected in the alley beside the Emporium to raise villagers’ awareness about consumption and waste during the holiday season.

The “Trash Tree” did that, and a whole lot more. Though up for not quite four days, the tree — about eight feet high and built from black newspaper-filled garbage bags arranged in a classic Christmas tree shape around a ladder core — sparked controversy and conversation that lingered for days downtown and on the Yellow Springs Open Discussion Facebook page, prompting Zero Waste to create its own Facebook page to explain the group’s intentions and message.

“We put it there for a reason; it represented something important,” said Hennessy in an interview last week. “I was amazed that it became a controversial issue.”

But the controversy wasn’t confined to words. Zero Waste members put up the “Trash Tree” on the Sunday after Thanksgiving, and by Tuesday evening the tree had been damaged, the bags slashed in places so that the newspaper “stuffing” was exposed. Hennessy alerted the Yellow Springs police, who put the tree on their “extra patrol” list, according to dispatcher Ruth Peterson.

Clevenger repaired the garbage bags Tuesday night, but when Hennessy stopped by the alley on Wednesday morning, she realized that the signs accompanying the tree — one containing waste-related facts and the other offering suggestions for alternative gifts and lower-impact shopping choices — had disappeared.

“The context was lost with the signs gone,” said Clevenger, who expressed disappointment about the actions taken against the tree.

By Thursday, the roughly 24 garbage bags that made up the tree had also disappeared. All that remained in the alley was the ladder core, which Zero Waste members took away. But Clevenger and Hennessy said the group had already ordered replacement signs, at a cost of $130, and hoped to use them in some way during the holidays. Zero Waste does not plan to erect another tree.

Reactions downtown
That’s fine by some surrounding shopkeepers and other villagers who saw the tree as misguided. Critiques seemed to center on three issues: aesthetics, perceived divisiveness and the relevance of the message to Yellow Springs residents.

“I was ready to tear it down myself,” said Kate Mooneyham, manager at Dark Star Books & Comics, in an interview last week. She made similar comments on the Open Discussion Facebook page. Mooneyham said she saw the tree as an “eyesore” at a time — from Thanksgiving to New Year’s — when shopkeepers make an extra effort to decorate their shops to entice buyers.

Lee Kibblewhite, owner of Asanda Imports, also questioned the tree’s aesthetics. Downtown businesses make “every effort” to make Yellow Springs appealing to visitors during the holidays, he said last week. He, too, voiced his opposition to the tree on Facebook, as well as expressing it directly to a Zero Waste member, he said last week.

His wife and co-owner, Molly Lunde, believed the tree ran counter not just to holiday aesthetics, but also the holiday spirit business owners seek to cultivate. “We’re trying to create joy and happiness,” she said.

But Clevenger saw aesthetics as essential to the piece’s impact, noting that the tree was inspired by a similar, much larger installation in Vancouver. “I was a little bit disappointed that a village with activist roots couldn’t look beyond aesthetics. When people say, ‘It’s an eyesore,’ it’s supposed to be. It’s an installation for environmental activism.”

Beyond the tree’s look, Kibblewhite expressed dismay that the accompanying signage singled out some local businesses, while leaving others unmentioned. “You’re going to get business owners riled up [when you do that],” he said.

One of the original signs offered a list of alternative gift ideas to reduce waste, emphasizing experiences and support for local charities rather than “stuff.” Several local businesses were also mentioned, including purveyors of used rather than new items. A line of text at the bottom read, “And when you buy, Buy Local!”

Zero Waste’s Clevenger said, “I feel bad that the list wasn’t as comprehensive as it could have been.” But, he added, “This was an awareness campaign, not a promotional campaign.” The sign’s intent was neither to promote nor boycott any individual shops, he said.

Kurt Miyazaki, owner of the Emporium, gave permission to Zero Waste members to install the tree in the alley on Emporium property. (The tree was erected where the “free box” was formerly housed. That, Miyazaki acknowledged, could have led to some confusion among villagers who saw the tree as “just trash,” rather than trash with a message.) Miyazaki said last week that he supported the content of the group’s messages around reducing waste and promoting mindful consumption.

“I endorse anti-waste 100 percent,” he said. At the same time, he added, “I don’t consider businesses in town to be a part of the consumption problem.” Miyazaki said that while he glanced over the signs accompanying the tree, he didn’t realize that certain businesses, including his own used book operation, had been highlighted. (The sign suggested giving used books for the holidays, and mentioned the Emporium, Dark Star and Epic Book Shop.)

“I didn’t know that we were singled out, and that makes me uncomfortable,” he said.

And he was emphatic in his support for local small businesses. “I would not support something that hurt other businesses,” he said.

But, he added, he was dismayed by the destruction of the tree. “I was very disappointed by the vandalism. That is unacceptable to me.”

One of the most strongly worded critiques of the tree, posted on Facebook on Dec. 2, came from John Skot Brennan, who lives in an apartment above the alley. His statement appeared to hit a nerve, generating dozens of comments, many of them supportive of his views. In an interview this week, Brennan said he “appreciated the message,” but felt the group wasn’t going about it in the right way.

He was especially alarmed, he said, to see that the tree was made of non-biodegradable trash bags, and that nylon fishing twine was brought out to repair the tree after the bags were slashed. And despite his own concern for the environment, he questioned whether waste and consumption were the most pressing issues at this time.

“You have made an 8-foot-tall tree of mostly Non-BioDegradable trash. That you have taken the time to decorate with tinsel etc… to teach people about how much excess trash is created during the holiday season,” Brennan wrote on Facebook as part of a longer statement.

But others downtown enjoyed or felt neutral about the tree. Sam Lovering, who works at Pangaea, said he found the tree “festive” and “Tim Burton-esque,” and a useful reminder to be responsible about consumption during the holidays.

Tim Hackathorne, who frequently sits and reads at a table adjacent to the alley, said “I wasn’t offended by it. I didn’t really look at it,” though he added he understood why those who lived or worked nearby might not want “what looks like a pile of garbage right there.”

A couple of downtown business owners said that more collaboration and communication could have improved the installation. Gail Lichtenfels, owner of Epic Book Shop, just down the alley from the tree, said that while she found the installation an “eyesore” in the context of Yellow Springs where “aesthetics is big,” she thought “it was very cool to do a public presentation” around consumption. But outreach to business owners would have been welcome, she said.

Both Hennessy and Clevenger said they received lots of positive comments about the tree from pedestrians and shoppers in the village. “On Sunday after we put it up, most people were very interested,” said Hennessy. “People were drawn to it, they seemed to get it.”

How relevant to Yellow Springs?
No one with whom the News spoke disputed that curbing consumption and reducing waste were important messages. But several questioned the relevance of those messages to Yellow Springs.

“This town has a pretty good track record,” said Mooneyham. “It was almost like ‘trash shaming.’ It’s not like the town is overflowing with garbage.”

Other business owners shared her sense that many Yellow Springers already consciously seek to reduce their environmental impact.

“I saw the consumption critique as endorsing the lifestyle that we have,” said Miyazaki, citing biking, buying locally and using alternatives to plastic bags for shopping as three common habits of Yellow Springers.

But Clevenger, who said that the “Trash Tree” was aimed more at villagers than out-of-town shoppers, pointed out that while many villagers do, indeed, live eco-conscious lives, Yellow Springs as a whole has a surprisingly poor record on at least one crucial indicator of environmental action: recycling.

Clevenger cited the latest figures, from 2014, provided by Rumpke Recycling, which show that Yellow Springs actually has a lower recycling rate than Greene County as a whole — 33.4 percent versus 38 percent — and even slightly trails the national average, which is 34 percent. Clevenger clarified that those figures represent the percentage of total waste that’s recycled (and not all waste is recyclable under Rumpke). Determining the percentage of recyclable waste that villagers actually recycle is hard to do, he said, because what Rumpke accepts as recyclable fluctuates weekly due to price changes in the aftersale market.

“People are under the assumption that we just do these [pro-environmental] things,” said Clevenger. “The problem with what seems obvious is that it might not be true.”

Though Clevenger and Hennessy said they are disappointed and a little bewildered by the opposition to the “Trash Tree” — and are particularly upset by the damage to and dismantling of the tree — they are glad it sparked conversation, and they hope the dialogue will continue.

On Facebook, Asanda owner Kibblewhite reached out to Clevenger, and made plans to meet offline. They and others who spoke out about the tree met earlier this week, according to Kibblewhite, who said they had a “really positive” exchange.

And Zero Waste will be kicking off a film series in January focused on waste and consumption, which will include activities for adults and kids. There are a lot of things villagers can do to move toward a “zero waste” model, said Clevenger, listing composting, increasing recycling and tackling the hard work of making behavioral change around culturally ingrained consumption.

Despite the mix of local reactions, Clevenger and Hennessy believe the holiday season is a place to start. One of the sign’s central statistics was that household waste increases by more than 25 percent between Thanksgiving and New Year’s Day.

“Like everyone, we want a good, resilient economy,” said Clevenger. “But we don’t want it at the cost of conspicuous consumption and more waste.”