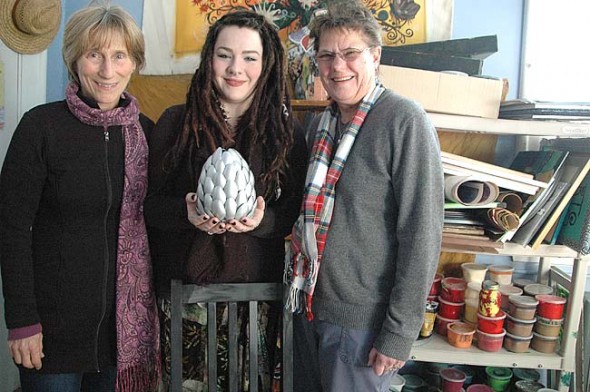 The Zero Waste group of Yellow Springs presents a free screening of the documentary “Reuse! Because You Can’t Recycle the Planet” followed by a panel discussion this Saturday, Jan. 23, at 2 p.m. in room 219 at the Antioch College Science Building. Shown above are, from left, event organizer Liz Mersky, local artist Anna Burke and organizer Vickie Hennessy, with Burke holding a sculpture she created from discarded plastic spoons. (Photo by Diane Chiddister)

From ‘useless’ to ‘use again’

What grabbed Liz Mersky’s attention were the images of an albatross mistaking plastic for food and dolphins struggling while tangled up in the ever growing floating mass of plastic waste that’s been dumped in the oceans. These images, from various documentaries, galvanized Mersky to take action to reduce the amount of waste that she personally produces, and beyond that, to take steps to try to educate others on the waste issue.

“It’s always wildlife that grabs my attention. That was it for me,” she said in a recent interview. “I couldn’t just watch these movies and then go home and do nothing.”

So Mersky joined the local Zero Waste group, and as a member has worked to organize a series of programs this month aimed at educating villagers on how to reduce waste. As part of the series, the group will show a free film “Reuse: Because You Can’t Recycle the Planet.” The screening takes place this Saturday, Jan. 23, from 2 to 4 p.m. in room 219 at the Antioch College Arts/Science Building.
Following the film, Mary Ellen Etienne, CEO of the Reuse Institute in Dayton, will speak, along with a panel of local artists who use recycled materials in their work. The panel will include Alice Young-Basora and her daughter, Carina; Anna Burke and Sondy Kai.

The amount of waste that accompanies mass consumption is threatening the planet’s existence, according to event organizers. Other Zero Waste-sponsored events have focused on a variety of strategies for the reduction of waste, including refusing to buy unnecessary items or those wrapped in plastic and recycling as much as possible. But recycling, while once considered the optimal strategy for sustainable consumption, also requires the use of resources, and it’s not always certain that items targeted for recycling are in fact recycled, with much ending up in landfills, Mersky said.

So those concerned about environmentally sustainable living should also pay attention to finding new uses for what we already have, according to organizers. And that’s the topic of Saturday’s film.
“This has got me so excited,” Mersky said regarding reuse as a strategy for sustainability. “It’s doable. Just start where you are, and take it one step at a time.”

The average American produces 4.3 pounds of trash a day, according to the Duke University Center for Sustainability, which is about 1.6 more pounds than was used in 1960. Altogether, this country produces about 220 million tons of waste yearly. And about 4.8 million metric tons of waste have been dumped in the oceans to this point, according to the American Association of the Advancement of Science, or AAAS.

“We need to start asking, ‘do we need all this stuff?’” Mersky said. And while she understands that some can be overwhelmed by the scope of the problem, she believes strongly that individual actions can make a difference.

“I believe that if we live our values, we will have an impact,” she said. “And we’ll tell our friends, and it will spread. If more and more people stop buying products, something will change.”
And as an artist, Mersky gets especially excited about the creative possibilities inherent in the strategy of reuse.

“I love to transform things,” she said. “It opens up your world to create new things from what you already have.”

Anna Burke, another panel member, goes even further, creating all of her original art from reused items. An employee of Tom’s Market, she discovered that the store ends up with unused plastic holders of receipt tapes, so she decorates the black plastic spirals to create beads for dreadlocks. And after noticing that customers throw away plastic spoons after stirring their coffee, she recovered the spoons, painted them grey and created a sculpture.

And as well as making items that are good for the planet, art from recycled material is unique, she said.

Saturday’s film and panel discussion is one piece of a six-month effort to educate villagers about environmentally sustainable practices, according to Vickie Hennessy, another Zero Waste organizer. The overall effort is overseen by the Resiliency Network and has been funded by a grant from the Yellow Springs Community Foundation.