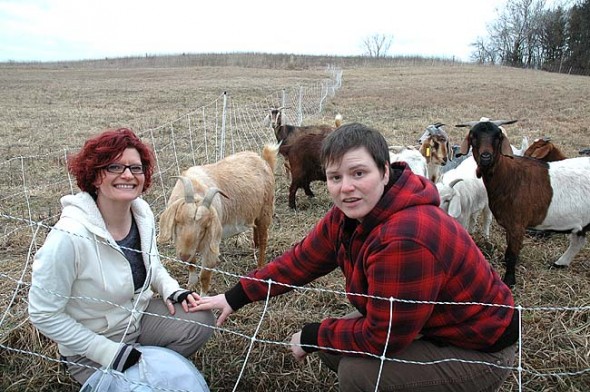 Villagers Theresa Nolan, left, and Mandy Knaul moved to Yellow Springs in part to live closer to the land. Here, they fulfill their wish on Smaller Footprint Farm, Doug Christen’s CSA just outside the village where Knaul farms, grows flowers and looks after the Kiko goats (including Butterscotch, center). Nolan keeps bees on the property. The couple lives in the village. (Photo by Audrey Hackett)

A wish to live deliberately

It might be the oldest tug of all, at least in America: the tug to live differently, to “live deliberately,” as Thoreau wrote in the opening of “Walden.” Mandy Knaul and Theresa Nolan felt it, too. Until mid-2012, the couple lived in New York City, and loved it there, but also felt drawn to other ways of living.

They didn’t head to the woods (though they considered moving to Vermont), but rather to small-town life in Yellow Springs, a place Knaul knew and loved from her years at Antioch College in the late 1990s.

“Like any decision, this one had so many sides to it,” Knaul reflected in a recent interview. Nolan agreed. A desire to grow more of their own food; a longing to keep bees; the wish to be nearer to aging parents and other family members; a certain weariness of the accumulated “weight” of New York City life — all these were factors, Nolan said, in their growing resolve to put down roots in soil, not concrete.

“Our dog never got to see grass; our cat hadn’t been outside for eight years,” Nolan said. “It was time.”

Reflecting on their decision now, from the couch of their Yellow Springs home with their dog, Laveau, between them, the couple said moving out of New York to a small Ohio town — even to this particular small Ohio town, “this bubble,” as Knaul said more than once, rounding her hands to demonstrate — was fraught with trade-offs. The gravest negative was deeply, woundingly personal. In New York, Nolan and Knaul were married; in Ohio, their marriage would not be recognized, until last year’s Supreme Court ruling.

The couple asked themselves if they could “deal with the psychic injury of that” to make their lives here, Knaul recalled. “We decided we have as much right as anyone to be here, and we have to have the courage to design our lives,” she said.

As the couple was getting serious about leaving New York for points still unknown, Knaul was meanwhile following Antioch’s revival. “I’m not a magical thinker, but I really felt like something was happening with Antioch,” said Knaul, a 2000 graduate. She was astounded to learn about the Antioch Farm, a development that dovetailed with a shift in her own interests. She had left a doctoral program at the New School to train in horticulture at two major New York botanical gardens, then worked for a time as a gardener for the Hudson River Park Trust. Her love of horticulture blossomed into a passion for farming.

When she learned that Doug Christen, whose wife, Kat, manages the Antioch Farm, was seeking interns at Smaller Footprint Farm, a small CSA just outside the village, she buzzed with excitement. She talked to Nolan about the opportunity, then talked to Christen.

“I felt an instant connection with Doug,” said Knaul. “He’s an amazing person.”

She got the internship. “I thought, ‘Oh my God, I’m doing another co-op,’” Knaul laughed. But as a self-identified “multipotentialite” — a term the couple recently picked up from a TED Talk meaning, roughly, a Renaissance person — Knaul was only too happy to dig into another new pursuit.

During the summer of 2012, while Knaul was working “five days a week from dawn to dusk sometimes” in the Ohio dirt and living with former villagers Hardy and Jeanne Ballantine, Nolan remained in New York City. She had a job of significant responsibility and visibility within the nonprofit world there, directing an agency division serving homeless LGBTQ youth through nature-based programs. She loved her work. But her personal environmental commitments and, she said, “a serious, serious crush on being a beekeeper” were inclining her to more rural living.

Still, Nolan was skeptical of her wife’s extravagant claims about Yellow Springs. “I said, ‘Mandy, there’s a reason I live in New York. I know small towns in this country,’” she recalled. Nolan has northern Ohio roots, and grew up in towns in Texas and Michigan. After moving to New York City at 25, she felt deeply at home. Knaul, who grew up in Columbus, said she, too, considers New York her “city home” — but “Antioch College is my heart.” And she knew the college’s small town was unique.

Nolan visited Yellow Springs for the first time toward the end of Knaul’s internship summer. Closing her eyes she could almost — but not quite — imagine herself back in Brooklyn. “The village does feel a little bit like a city neighborhood,” she conceded.

More importantly, she added, “Right away, I could feel the energy. I thought, ‘What is this town?’”

When Christen invited Knaul to stay on beyond her internship to work year-round at Smaller Footprint, the offer sealed the couple’s decision to relocate. Knaul found a house to rent, and Nolan moved to Yellow Springs, dreaming of beekeeping and — after 13 years in cramped New York apartments — the luxury of closet space.

As it turned out, the house lacked closets, and beekeeping was still three years down the road. But Nolan took to the village immediately.

“I loved the people, the sense of community and camaraderie,” she said.

Money was tight for a time. “We had to be patient with our finances,” Nolan said. She consulted with her former agency for a few months, then began looking for a position closer to her new home. Wanting to stay in her field, she took an entry-level caseworker job at Homefull, a Dayton agency serving the needs of the city’s homeless. She’s since moved up in the agency, and currently serves as the chief performance officer.

“This is the work I’ve done my whole career, and I love it,” she said.

Homefull recently launched a microfarm in downtown Dayton, and Knaul is consulting with the agency “to bring its urban farming model to the next level,” said Nolan. Knaul also continues to work at Smaller Footprint, including “the bizarrely wonderful job” of caring for the farm’s Kiko goats. During her first winter in the village, she and Nolan laid plans for a flower business, which they launched in the summer of 2013, selling under the name Zen Blossoms at the Farmers’ Market. With Christen’s blessing and encouragement, Knaul trades her labor on the farm for land to grow her flowers — zinnias, Amaranth and deep red- and brown-hued sunflowers, among others.

A true multipotentialite, Knaul is involved in a stunning array of local projects. She has a garden design business; she walks dogs; she reads manuscripts for the Antioch Review; she recently began collecting food scraps twice weekly from Mills Lawn for her own and the farm’s compost; she has several writing projects; she paints and draws, and is working on a large mural that will go up over Pangaea, Dark Star and Current Cuisine on Xenia Avenue.

“Mandy’s got lots of ‘noodles,’” Nolan laughed, using their private term for Knaul’s profusion of ideas. “I wait until they’re fully cooked to eat dinner,” she added.

If Nolan herself has fewer “noodles,” they tend to stick, she said. “Last year, I finally got to become a beekeeper.” She bought used beekeeping equipment and set up two hives at Smaller Footprint.

“Now that we’re a few years into Yellow Springs, we’re moving closer to the reasons we came,” Nolan said. “I feel like we’re influencing our little part of the world. We’re beekeeping, we’re growing our own food. We’ve found our ‘sweet spot’ here.”

They do miss New York’s multiculturalism, its ethnic neighborhoods, its food. They haven’t been back, and are a little afraid to, Nolan said — afraid both that a visit will touch off a yearning for the city, and conversely, reveal that their frame of reference has changed. (“We’ll get lost on the subway, or step off the curb at the wrong time,” she joked.)

Yellow Springs is no utopia, they realize. Nolan sees a need for more diversity on Village Council; Knaul has been active in Black Lives Matter and Zero Waste Yellow Springs.

But they love the village, and the people in it, and the question is no longer why they came, but why they stay.

One Response to “A wish to live deliberately”