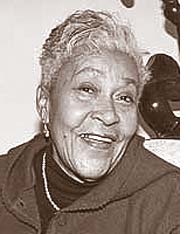 Faith Lenora Mahood Patterson died on Jan. 17, 2016, at her home in Yellow Springs. She was born April 29, 1930, in Atlantic City, N.J., to Rosebud Peagram Mahood, a teacher, and Dr. Robert Mahood, a dentist. She was a member of Christ Episcopal Church in Xenia.

Her mother did not think that she could have a child, but one day, while swimming in the ocean in Atlantic City, she became ill. Her sister Jennette said, “Rosebud, I think that you are pregnant.” Her reply was, “I always had faith that I would be able to have a child,” and that was how the name “Faith” was given.

Faith grew up in Petersburg, Va., with her mother and grandparents, Jenny and Charles Peagram. She was surrounded by her aunts, uncle, cousins and paternal grandmother Lenora Mahood. An honor roll student, Faith graduated in 1952 from Bennett College in Greensboro, N.C., receiving a B.A.

During a visit home from Rich Square, N.C., where she was a teacher, she met her future husband, Lt. Col. Thaddeus Myers Patterson, at a cousin’s dinner party with her mother where he was showing films of his military travels. They were married in 1954. As a military couple, they traveled throughout the world, first starting in Japan, where her daughter Karen Rose was born. Next came her son, Eric Myers, who was born in the U.S., and her last child was Nerak Roth, born in Germany. Faith and Pat were blessed with two grandchildren, the son and daughter of Nerak Roth, Nerak Roth Jr. and Erika Rose, who blessed them with a great-grandchild, Amirah Rose. Also, Faith and Pat were blessed with the families of Eric Myers and Thaddeus Myers.

During Pat’s military tours of duty, Faith taught in Japan, Germany and throughout the U.S. Coming to Yellow Springs in 1969, she taught at the Antioch School. She went on to have her own preschool program, “Faith’s Place.”

Faith was an avid organizer, volunteer, civil rights and community activist. She believed in the fact that “everybody counts.” She demonstrated her belief through her participation in several community organizations. Faith was an active member of the YS Human Relations Commission. The African-American Cross-Cultural Works was very close to her heart. A brainchild of hers, with her good friend Bill Chappelle, was the AACW Blues, Jazz and Gospel Fest, which began in 1997 and has continued for the last 18 years. As an advocate for youth, she organized with members of AACW the “Youth Showcase,” which provided a platform for youth to perform. They were encouraged and applauded for whatever their effort was. Through AACW, she created “Guess Who’s Coming to Dinner.” This yearly event brought the community together through, as she put it, “breaking bread together.”

Faith received several awards for her work in the community. Some of her awards include the Ohio Heritage Fellowship for Community Leadership, awarded by the Ohio Arts Countil, City Folk and the Ohio Folk Arts Network; Greene County Women’s Hall of Fame; Griot Culture Award, for her work in establishing the tradition of community through Kwanzaa; Faith Patterson Day, Sept. 9, from the Village of Yellow Springs, a resolution honoring her role in providing an appreciation of cultural diversity; Miami Valley Human Rights Award from the Bahá’ís of Miami Valley; Culture Builds Communities Award from the Dayton Cultural Center; and a special honor from the MLK Day Committee for Faith and all of her work with AACW and the MLK Day Celebration.

As she has said many times, “In my life, I’ve had a great ride, I’ve been able to do just about everything that I’ve wanted to do and I did the best that I know how.” She will always be remembered for “everybody counts.”

Faith’s life will be celebrated at a memorial service, which will be held on her birthday, April 29. Details will be shared closer to that date. In lieu of flowers, donations may be made to AACW, P.O. Box 441, Yellow Springs, OH 45387.