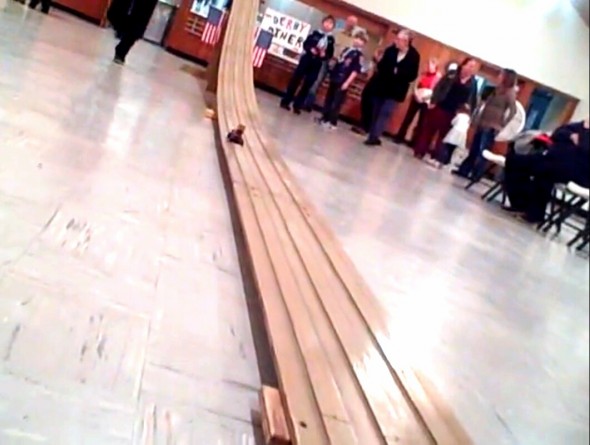 The track at the Pinewood Derby, shown here bearing a single car, is built to race three cars.

The excitement was palpable as the Yellow Springs Cub Scout Pack 578 held its annual Pinewood Derby on Monday, Feb. 22, at the First Presbyterian Church. The church’s Westminster Hall was decked out with a long, sloping track which would accommodate three cars at a time for two different races: a “no holds barred” competition, in which scouts could enter cars of any specification or design, and a “street legal” race, with cars built “to spec,” weighing no more than 5 ounces. In both races, three judges decided the winners of each round, who sat on the stage in Westminster Hall in the “Winner’s Circle” until all but three were eliminated. The winners in each race were:

Congratulations to all the racers on another year’s display of talent!

Click below for a brief video of the night’s event.