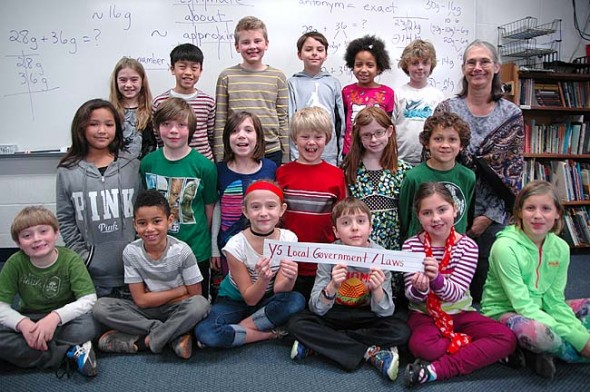 Students in Ms. Morgan’s third-grade class at Mills Lawn came upon several surprises as they studied local government during the past two months. For instance, when Police Chief Dave Hale visited the class and brought in the book of local ordinances, students were taken aback by the book’s size.

“I was surprised how big the law book was, all those laws,” said Morris Wyatt recently.

Some thought at first that local government just meant the mayor, and were surprised to find out how many people it takes to run a small town. Students also didn’t expect that they could do anything to affect how local government functions. But it turns out that they can, the students discovered. And they did.

“The Charter says if you want to tell Council something, you can write a resolution to meet your needs,” said Liliana Herzog.

At Council’s Feb. 1 meeting, the third graders turned out to promote the resolution they submitted to Council, which asked that Village leaders “consider consulting with student representatives from Village schools on a regular basis.”

The class then saw local government take action. Council unanimously passed the resolution, which stated that Council will strongly consider the recommendations from the class.

The eight-week local government project was an example of project-based learning, or PBL, according to teacher Peg Morgan. The class set out with a driving question, which was, “How can we, as citizens of the Village of Yellow Springs, participate in local government and make decisions about laws that benefit the common good? They then set out to learn about the structure of local governent and its leaders, the responsibilities of citizens and how laws affect and benefit citizens.

Last week, several students said they were amazed to find out from their visitors that the skills necessary to run a town aren’t that different from those needed to make a classroom, or even a family, function well.

According to Tiger Collins, “I was surprised that we practice local government every day at home. You have to listen to each other and compromise.”

A critical part of PBL is learning collaborative skills, and students said they found this part of the project a challenge. For instance, they were divided into several small groups and each group had to pick a leader. But how? Each group worked together to choose its own process and the resulting processes were varied, from using the old standby “rock/paper/scissors” to pick the leader, to voting, to having students who wanted the job pick a number between 1 and 20, with the closest pick getting the job.

“We had to really cooperate,” said Elyse Lytle.

The students also found it challenging to give critiques on each others’ writing, during which they told each other which parts of their essays were strong, and what parts needed more work.

According to Kenji Housh, “We had to figure out what to do and how to help each other.”

All in all, the project was eye-opening, the students said, and helped them understand how to be good citizens. For example, being a good citizen means, according to Tegan Hays, “We have to care for each other.”

Also, said Kanon Flatt, “You have to be quiet at night so your neighbors can go to sleep.”

And they want the town to know that children have something to offer. Kids care a lot about sidewalks, for example, since they have to walk on them to get to school, and they also know and care about the Gaunt Park pool, just to give a few examples.

“We really wanted to learn how the city works so that we could be a part and help the city,” said Katie Quigley.

All in all, according to Cole Oberg, “A lot of us, when we thought of local goverment before this, didn’t think much. But now we think a ton.”