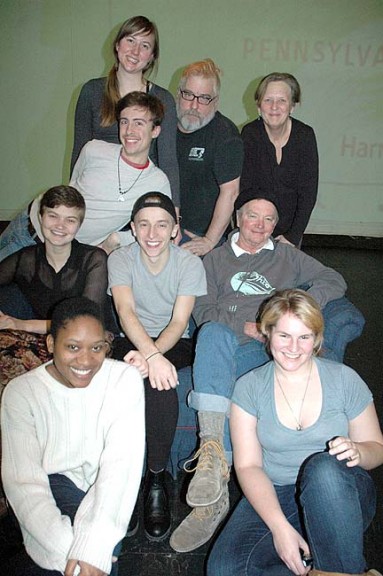 The founders of The Talking Band, an award-winning avant garde theater company in New York City, will be in residence at Antioch College for five days beginning the end of this week. As part of their stay, Paul Zimet and Ellen Maddow will offer a workshop on “Devised Theater and Civic Engagement,” to take place at the Foundry Theater on Saturday, Feb. 13, from 1 to 4 p.m.

In an email this week, Zimet said he hopes the workshop attracts “artists — theater, music, dance, writers, visual artists who have an interest in community-based art or collaborative creative process or both. We will be sharing exercises that Talking Band uses in the creation of its own works — in movement, music, writing and the creation of characters and theatrical images.”

The workshop, which is partly funded by the National Endowment for the Arts, is free. Any interested persons should just show up on Saturday afternoon to take part, according to Antioch College Associate Professor of Performance Louise Smith.

Also as part of their residency, Zimet and Maddow will work with local actors, both student and community, who will be presenting their play, “Marcellus Shale,” on March 11 and 12. The play looks at how the issue of fracking affects a community, and along with the play, a panel discussion on the topic will also take place.

See the Feb.11 News for a more detailed story on the workshop and play.