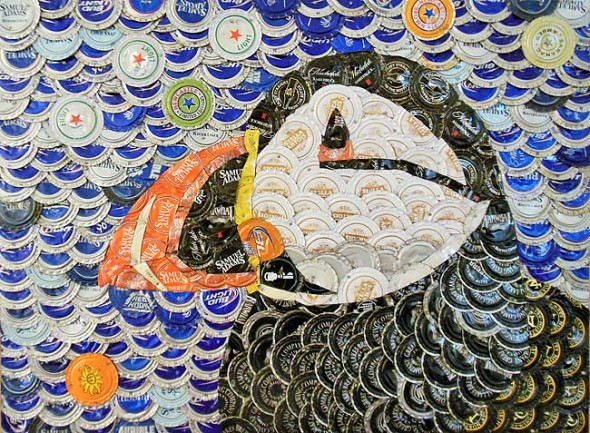 Artist John Taylor-Lehman uses beer caps to create colorful, mosaic-like works. The Zanesville resident began experimenting with the material about five years ago in an effort to produce something distinctively his own. His beer cap art is on display at the Yellow Springs Brewery through Feb. 28, with an artist’s reception this Friday, Feb. 12, from 6 to 8 p.m. (Submitted photo)

Pop art with a colorful twist at Yellow Springs Brewery

To some, beer caps might be the least interesting part of beer — mere barrier to the golden liquid sealed inside. But to artist John Taylor-Lehman, they’re the best part of the brew.

Okay, maybe not quite the best.

But indispensable to his art. Taylor-Lehman (father of News reporter Dylan Taylor-Lehman) uses beer caps, thousands of them, to create colorful collages and 3-D pieces depicting sea creatures, snakes, birds, flowers, mask-like faces and even, turning the material back on itself, a hand hoisting a mug of foamy beer.

“I like the aspect of focusing on something and spinning it out as far as I can,” he said in a recent interview.

Taylor-Lehman, who lives in Zanesville, has been making beer cap art for about five years, with an intensive focus on the medium over the last three years. He’s had a number of shows in and around Zanesville, and now has his first show in Yellow Springs, at the Yellow Springs Brewery. His work will be on display at the brew pub through Feb. 28; an artist’s reception will be held this Friday, Feb. 12, from 6 to 8 p.m. He also has shows coming up at venues as diverse as the statehouse in Columbus and the Ohio State University faculty club.

The local show came about when Taylor-Lehman stopped by the brewery on a visit to Yellow Springs and began chatting with owner Lisa Wolters about the possibility of exhibiting work there. Originally scheduled for 2018, the show got moved up by two years when the brewery had an unexpected opening in its schedule.

“I just thought this was perfect for a brewery,” said Taylor-Lehman. “I really appreciate Lisa having me as a guest.”

A retired public school science teacher, Taylor-Lehman has been making art for about 20 years. He’s “completely untrained” as an artist, he said, but highly exploratory in his use of media. His work embraces collage, painting, woodworking, mask-making, sandblasting (images sandblasted in relief onto stone) and more. But beer caps are his most distinctive medium. He began using them partly in an effort to develop his own style.

“I really wanted to do something people could identify as coming from me,” he said.

Taylor-Lehman and his family have traveled widely, and the cut-tin ornaments he saw in Mexico are one inspiration for his beer cap pieces, he said. Also while in Mexico, he observed a man pounding nails through flattened bottle caps to secure his tarpaper roof. The image stuck in his mind, and his current work uses that utilitarian technique to artistic ends.

More broadly, Taylor-Lehman said he’s influenced by folk art and the art and ethos of indigenous people. “I admire how people make use of the resources around them,” he said. “The average person beautifying life — that’s very meaningful to me.”

But to get down to the brass tacks of beer caps, how does Taylor-Lehman create his pieces? Each image uses hundreds to thousands of beer caps, which he flattens by hand. Three whacks with a roofing hammer on one side, plus four to five more on the flip side is what’s needed to render the cap totally flat, he said.

“I’m very good at it,” he admitted. But he’s still hoping someone will hear about his work and come up with “the right solution” — a specialized device, perhaps — to save time and shoulder wear-and-tear. After a cap is flat, he nails it to the piece of plywood that forms the backing of each artwork. He used to do this step by hand, too, but now uses an air compressor and nail gun to speed things up.

He enjoys the physical nature of the work, he said. And its labor is enhanced by music played loud — punk rock, reggae, ska.

Against the backdrop of plywood and noise, an image takes shape, mosaic-like, through the patterning of different colored caps. Different brands of beers have caps of different colors, Taylor-Lehman explained, and part of the challenge is assembling his “palette.” Blue, red, black and silver are easy colors to source (think Busch, Bud and Miller); orange, purple, green and yellow are tougher. Color availability can be seasonal.

He keeps his colors organized in a box with cubby holes that a woodworking friend crafted for him.

And where do the caps come from? Let the record show that Taylor-Lehman does not — contrary to every ribbing he’s ever received about his chosen medium — drink all the beer himself. Rather, he said, once he got the word out in Zanesville that he needed beer caps, people dropped off bags of them at his home and at a local co-op gallery where he shows his work. Early on, he approached local bars and restaurants, but the beers in heavy rotation provided little color variety.

Some people have suggested that he source beer caps directly from the beer companies. But he’s not interested in that kind of arrangement; for him, it misses the point.

“This is a form of recycling,” he said. There’s a “conservation ethic” that runs through all his work, he explained. He uses scrap wood for his carvings, for example. He’d like to bring other found materials into his beer cap art; some of his 3-D fish pieces already incorporate snippets of license plates. In addition to the environmentalism implicit in using these materials, Taylor-Lehman said he would like to infuse more direct commentary into his work around issues such as overfishing and pollution.

Other future directions include bigger pieces. One of his largest efforts to-date is a work that measures 4 feet by 2 feet and is titled “Something to Octopi My Time.” (Beer caps are naturals for rendering octopus suckers, it turns out.) That piece alone used 2,000 beer caps.

Which means an awful lot of beers at the local bar — or craft brew pubs like the Yellow Springs Brewery. But Taylor-Lehman is philosophical about the, er, sacrifice this entails.

“A lot of people suffer for my art,” he said.