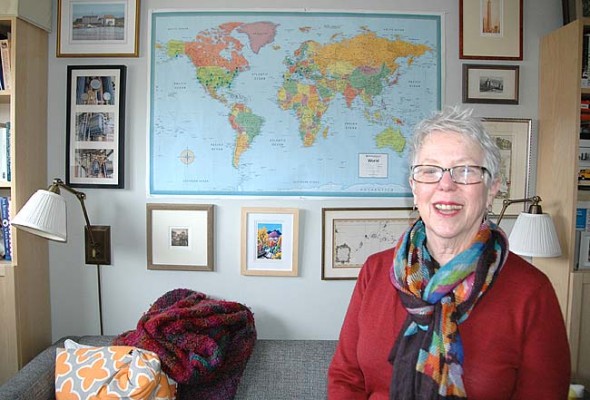 A taste for travel struck early for Antonia “Toni” Dosik, who points to a trip to Europe with her mother and sister when she was 13 as opening a door on the possibilities of the world.

“Talk about an adventure,” she said recently in the book-filled living room of her Kingsfield Court home. “We went to five or six countries,” she said of that teenage trip. The year was 1957. Her mother, “a widow with two children, didn’t speak any languages.” Dosik said the trip was foundational not only for the chance to see and experience new places and cultures, but also for the example her mother set of forging into the unfamiliar. She said her mother’s “sense of adventure and fearlessness” remain an inspiration.

Travel as a lifelong pursuit was solidified for the Los Angeles native during her student years at Antioch College. Having entered Antioch in 1962, Dosik joined the Antioch Education Abroad program and went to Europe for 18 months in the mid-’60s, including a year of university study in England.

“In retrospect, I realized what a strong impact it had on me. It gave me a taste of adventure and travel, and a lot of self-confidence. It whetted my appetite for more.”

After college, Dosik entered the world of nonprofit leadership, spending a number of years in the New York City area before returning to Yellow Springs in the mid-’90s to work in Antioch’s Development Office. After a couple of years at Antioch, she went on to head a nonprofit organization serving homeless people in Dayton and then moved to an organization in Springfield that served victims of domestic violence. After retirement she has continued to be available as an administrative consultant, and was recently called on by the Community Children’s Center to provide interim leadership support during an administrative reorganization there.

Throughout her life, however, travel remained a constant passion and pursuit. And during the 1980s she even operated a side venture that focused on planning trips to Great Britain for a limited group of clients. The business drew from her personal knowledge of living there as a student and extensive visits subsequently.

Now she has expanded that earlier focus and started a new travel business that features not only Great Britain, but also France, including the Provence region, and Portugal.

“These are countries that I know a lot about and that I can plan for,” she said.

She calls the enterprise Perfectly Planned Travel (online at perfectlyplannedtravel.biz) and seeks to make each trip as personal as possible to clients’ wants and needs.

She said the new business idea came in part out of the experience of “planning a very complicated family trip to France for 17 of our nearest and dearest.” The logistics of balancing everyone’s interests and abilities was a major undertaking, but also satisfying, she said.

“I’m a compulsive planner,” she said. “It’s gotten worse as I’ve gotten older,” she added with a laugh. The new business gives that deep personality trait a productive outlet.

Dosik said that while she gets vicarious pleasure in planning trips for other people, she also wants to make certain that her clients do what they want to do, not what she would necessarily want to do in their place. Toward that end, she has clients fill out a four-page questionnaire that helps to determine their interests and expectations. Sometimes they already have ideas about what they want. One client who was an embroiderer wanted to explore the embroidery traditions of the regions she visited. Another wanted to visit man-made mazes. Dosik said she enjoys doing the research for such trips because of the new things she learns.

In a time when the Internet allows travelers more access to an overwhelming amount of travel information and the means to make arrangements themselves, many traditional travel agencies have closed their doors. Dosik, however, isn’t tied to the traditional business model where she is dependent on a profit margin to support herself. As a retired person, she said she can pursue her business for the pleasure of it. Toward that end, she takes on no more than about 20 clients a year. The fee for an individual or couple, which includes a complete itinerary and detailed maps, directions, and information, is $300 for a week-long trip and $500 for two weeks. A supplemental cost for additional people is negotiable.

Dosik noted that while the Web has made travel information more accessible, it also “has made things more difficult,” in that the sheer volume of information can be overwhelming. If they’ve never been out of the country before, or traveled to that region of the world, “people don’t know where to begin.” When it comes to her areas of focus, Dosik knows where to begin.

She also knows things that the guide books don’t say. If you are disinclined to drive in the dark at night, for instance, you may not want to be out driving late in the south of France where roads are not well-lighted.

“People don’t know what they don’t know, and it’s part of my job to help them,” she said. Good planning and information help travelers feel confident and secure in unfamiliar circumstances and help ensure a positive trip. That security also allows for flexibility, Dosik said, in that travelers may choose to stick strictly to the prepared itinerary or take a detour when an unexpected opportunity arises. No matter which, they are prepared for a good, perhaps even a once-in-a-lifetime experience.