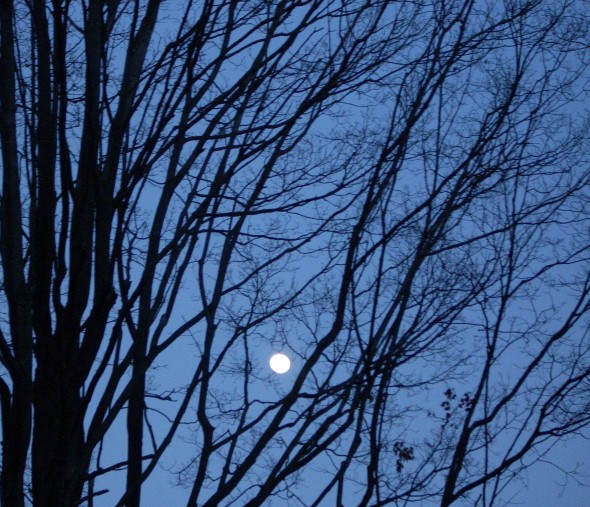 The full moon is a lonesome traveler. (Photo by Audrey Hackett)

BLOG— Hungering to be known

The full moon is a lonesome traveler. It spends the first part of the evening untangling itself from our backyard trees. Once it’s free, its voyage has no near companions. A high arc over the world, unnecessarily high, as if to avoid all chance encounters. A slide down to the other side of the street — was any simple crossing ever so contrived? By 6 a.m. or so, when I wake, its bright face is just outside our bedroom window. A plate of glass separates us, but otherwise we’re face-to-face, orb-to-orbs. Then it slips into the harbor of our neighbor Joe’s house, where it passes the day.

Astronomy is a mystery to me, as you might gather from this account, but the fact that the full moon sets just behind Joe’s house — that’s easy to understand. If I were the moon, traveling alone all night, I would take my rest there, too. I don’t know Joe well, but he has a kind face, and speaks kind words. I consider him one of my “street friends,” people I stop to talk with on the street in my daily circumnavigations of town. On fine days there are more of them — of us — and the length and enjoyment of the journey increases in proportion.

Sometimes this feels like a problem. Oh, not so much anymore, but when we first moved to Yellow Springs and began to strike up these friendships-of-the-street, I was both charmed and (I confess, I confess) annoyed. Charmed because we were meeting all these lovely people. Annoyed because a quick errand to buy cheese took two hours. “Where have you been?” my husband and I queried each other at first, especially when one of us was waiting on the other’s return to consume the aforementioned cheese. “Sorry, I ran into…” and we would enumerate the acquaintances, later friends, some of whom we didn’t even know by name. “The guy in front of Tom’s.” “The woman with the sweet dog.”

We gradually came to know names, as well as pieces of life stories. We rarely knew last names, and often still don’t, which has the curious effect of rendering a person less identifiable by full name than by first only. More than once a person has come up to me and said, “Oh, you’re a friend of Full Name,” and I’ve stared back blankly. I have a friend named Steve, sure. But Steve Smith? Never heard of him.

There’s a deeper reason for the annoyance I felt at first. Making friends was wonderful — if you wanted to make friends. And I did, but I guess I wanted to have a little more control over the process, a safety valve to increase or decrease the flow of kindliness according to the demands of time or mood. Sometimes street friends were good, but when you were too busy or unhappy to tarry — wasn’t anonymity the best, the most beautiful thing?

Well, no. Every human hungers to be known, and every human fears this, too. Anonymity appeals even when it breaks our heart a little, even when it stings. It’s frightening to put our wide, bright face to another’s wide, bright face: to confront the moon. Street friends have helped me do this, and I’ll name a few here: Joe, of course, and M.J. and Charlie and Lisa and Dan and Dot and Marge and Zoe and Pam and Carl and Larry and Howard and Leslie and Terry and Terry and Marsha and Paul and Margaret and more. That’s leaving out the street friends who are more accurately called neighbors, and the coffee shop and deli counter friends, and the friends I meet on the narrow streets of Tom’s — the “aisle friends.”

And how about this? One street friend, Amy, became the person from whom (two years after our first Walnut and Pleasant encounter) my husband and I bought the house we now call ours.

Is every town like this? Not in my experience, no. I feel like I moved to Yellow Springs in a different moon phase: the new moon, dark and secret. I’ve been waxing, learning how to be full. The moon learns this too, and relearns it every month, of course. Disclosure is scary, which is why the moon takes care to sail so high and alone. But disclosure is also sweet, which is why the full moon finds its daytime berth in the house of a friend. And why, when its face is at its brightest, it shines that face into our still-dark windows, looking for our own.