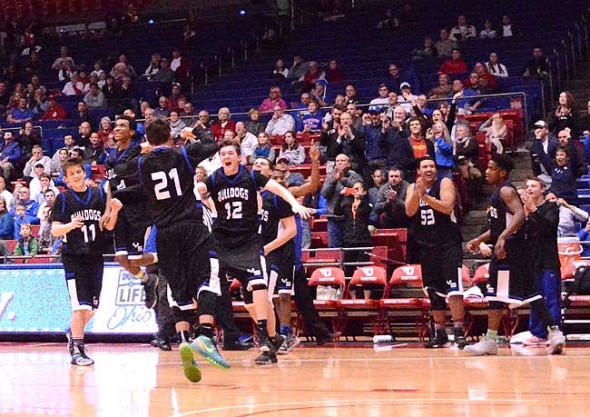 The Bulldogs ran out onto the floor of the University of Dayton Arena on Thursday night just after the buzzer sounded and the Bulldogs won the District IV title. Photo by Daniel Deaton

On Thursday evening at the University of Dayton arena, the Yellow Springs High School boys basketball team drubbed Middletown Christian, 66–24, to take the District IV Title. The Bulldogs’ win was the first time since the 2003–2004 season that the local team took the district title.

In February, the two teams had met in an even match-up, resulting in a triple overtime game. But last night’s game was anything but an even match. While Middletown Christian held a brief 3-2 lead at the beginning, the team fell behind by 17-3 early in the second quarter.

“He can play at the college level with no questions,” Yellow Springs coach Steve Grasso said in an article in the Middletown Journal-News. “”There’s some teams that are interested, but they better hurry because people are going to be jumping all over him.”

Also scoring in the twin digits for the Bulldogs were Kane Butler, who pulled in 12 points, and Ethan Dewine, who scored 10 points.

The Yellow Springs team is a special one, according to Grasso.

“These young men have played together for a lot of years even before high school,” he said. “We’ve instilled the team type of aspect, but they have a great love for each other. It’s a special group of young men.”

The Bulldogs will next play Jackson Center in the regional semifinal Tuesday, March 8, at 8 p.m. at Fairmont’s Trent Arena.

See the March 10 Yellow Springs News for more detailed coverage of both games.