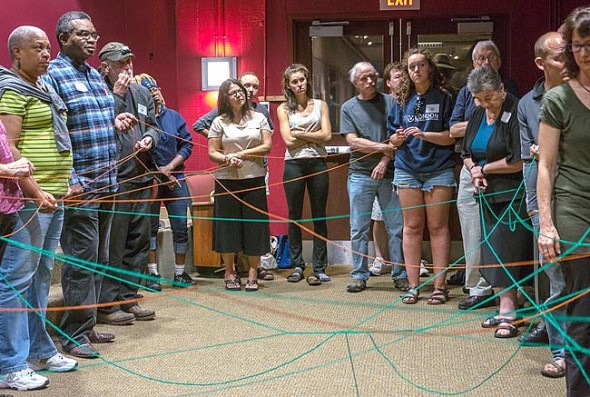 This month’s focus on local economy includes discussions of time exchanges, cooperative food hubs, local investing and more. Here, participants in a yarn game at Community Solutions’ fall 2015 conference discover how their skills intersect with their neighbors’ needs. Such intersections are the basis of the “sharing economy,” an economy centered on shared access to goods and services. (Submitted photo by John H. Morgan)

Groups striving for a local economy of resilience, equity

These are a few of the many ideas and projects that villagers will be discussing this month at a series of free events, organized by Community Solutions and the YS Resilience Network, that focus on the local economy. The goal, said Community Solutions Executive Director Susan Jennings on Monday, “is to build an economy that provides for as many goods and services locally as nationally — to move us to greater self-sufficiency, greater resilience and greater equity.”

The local economy events are part of a months-long series tackling topics ranging from local food to waste reduction to housing. Community Solutions and the YS Resilience Network are the organizers of the series, in collaboration with other local groups and with financial support from the Yellow Springs Community Foundation. Two more months remain in the series: April events will focus on renewable energy, and May will address transportation.

But in a sense, said Jennings, this month’s focus encompasses all the topics. “The emphasis on the local, and the impact of local initiatives in all these different areas on our local economy, really ties the whole series together,” she said.

There are lots of reasons why a local economy is a resilient economy, she added. “When you can meet your needs locally, you’re less susceptible to supply chain shocks or turmoil in the international financial system,” she said. And when you buy and invest locally, the impact of dollars spent and invested is concentrated.

“Studies have shown that if you shop locally, three times more of your money stays in the local community,” she said.

Local economic activity also builds a sense of community and people’s skill sets. “People working together have an opportunity to interact, to bond,” said Jennings. Not to mention the compelling environmental reasons for meeting a community’s needs within the community, rather than relying on goods and services from afar.

One example of an innovative local economy initiative that’s already underway is the Yellow Springs Time Exchange. Coordinated by villager Kat Walter, the time exchange, also known as a time bank, is a mechanism for connecting a community’s needs and skills without the exchange of money.

“These are just popping up all over the world,” Walter noted on Monday.

The local time bank was launched in November, following an earlier iteration developed by Antioch College students last June. The current Yellow Springs Time Exchange is a merge between the two groups, and currently has around 70 members. Services offered and requested range from piano lessons to dog walking to elder care to house weatherization to transportation to simple companionship, said Walter.

“We’re still getting off the ground, but we’ve seen more offers and requests in the past month,” she said. A potluck to bring together existing members and those interested in the time exchange was held on Wednesday, March 9, to kick off the local economy series.

Walter will discuss the time exchange in more detail this Thursday, March 10, from 7 to 8:30 p.m. in the Antioch College Arts & Sciences Building, room 219, as part of a panel called “Regional Examples of the Sharing Economy.” The title refers to alternative forms of economic activity that rely on the sharing of access to goods and services, according to Jennings. The second panelist is Brett Joseph, a Cleveland-based educator and organizational systems consultant, speaking on the Cleveland Evergreen Cooperatives, a connected group of worker-owned cooperatives that provide goods and services to major Cleveland institutions. And the third panelist is Lisa Daris, chapter coordinator for Slow Money Central Ohio, an organization that connects local investors with local food systems.

Jennings said on Monday that there are many ideas bubbling up, locally and around the county, about new and more democratic forms of economy. The concept of a worker-owned cooperative food hub in Yellow Springs is one such idea, and it’s smart and doable, according to both Jennings and Walter.

“We already have a wonderful local food base,” said Jennings. We can expand this into a food hub.”

Such a hub could offer shared facilities (such as a commercial kitchen), shared services (such as distribution and marketing, perhaps even a “local brand”) and access to local financing and business consulting. Working groups at the YS Resilience Network and Antioch College are already deep in discussions of how such a hub would work, said Jennings.

Villagers interested in a food hub and other cooperative economic models are invited to attend a workshop tackling these topics, held Saturday, March 19, from 11 a.m. to 4 p.m. at the United Methodist Church. “Toward a Democratic Economy” will begin with a keynote from Peter Block of Cincinnati, an expert in community building and empowerment, and will feature sessions on developing local financing and investing, a cooperative entrepreneurial hub and a cooperative food hub.

Jennings noted that this month’s conversations build on earlier brainstorming and planning sessions. In 2009, Community Solutions brought local economy pioneer Michael Shuman to the village for a workshop on strengthening the local economy by capitalizing on local assets, including time, talent and money, and reducing “leakages” of investment and spending. A number of the ideas that got expressed during those discussions have borne fruit, Jennings said, highlighting Antioch’s Wellness Center, the construction of the Mills Park Hotel and the college’s solar array, as well as recent movement toward a municipal solar array on the Glass Farm property.

“It’s important that people know we have these conversations, and they have a long-term impact in terms of actions and projects in the community,” she said.

The final event of the month is a free screening of the documentary “Money and Life,” by director Katie Teague, on Sunday, March 20, at 1 p.m. at the Little Art Theatre. The film — a look at the origins and meanings of money and a call to revise our relationship to it — touches on some of the deepest implications of the term “local economy,” according to Jennings.

“We’ve been mesmerized into thinking wealth is the same thing as money,” she said, when in fact it is much more: the relationships in a community; the sharing of skills, time and talents; the physical forms a community takes. Underlying the many experiments in new and more democratic forms of economy is a fundamental shift in our concept of wealth and ownership.

“We’re moving away from a sense of abundance that comes from what we [individually] own to what we have in common as a community,” said Jennings.

All local economy events are free. See the Facebook pages of Community Solutions and YS Resilience Network for details.

One Response to “Groups striving for a local economy of resilience, equity”