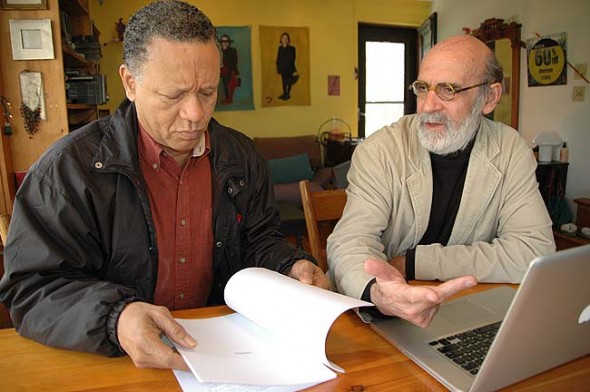 This week Craig Powell, left, executive director of the Dayton nonprofit PowerNet, met with local playwright and director Tony Dallas to discuss Dallas’ current project, a play based on stories from female inmates in the Dayton Correctional Institution. PowerNet, which aims to help former prisoners transition back into communities, is sponsoring the project, which is funded by the Ohio Arts Council. (Photo by Diane Chiddister)

Theater can be many things, Tony Dallas believes. It can be light and frivolous, or biting and satirical. And it can also go deeply into the human heart, illuminating the pain, struggles and triumphs of being alive at a particular moment in time.

“Theater needs to be about the large things,” he said in a recent interview. “I want that kind of theater.”

So Dallas, a local playwright and direcor, is especially pleased that his current project — a collaboration with female prisoners, shaping their stories into a play that will be presented to the public — fits squarely into the sort of theater he admires.

“For me, this project fits into that largeness,” he said.

Over 10 weeks this winter and spring, five times a week, Dallas is visiting the Dayton Correctional Institution, a prison that houses approximately 900 minimum, medium and maximum security female inmates. He meets with a small group of women prisoners who are telling their stories to each other, then writing the stories down. Dallas collects the material, shapes it, and returns to the prison for feedback. Together, he and the women are turning those stories into a play that they will one day perform for an audience.

“It’s humbling, to be in the presence of these women who are opening themselves up and trusting me,” he said.

The three-year project is sponsored by PowerNet of Dayton, and funded by the Ohio Arts Council. In the project’s first year, which is this year, Dallas is collecting the women’s stories and shaping them into a play. Next year, he’ll go back into the prison to collaborate with the women on presenting the finished play in the prison. And in the third year, the women will perform the play for area audiences.

Sponsoring the creation and production of an original play is new territory for PowerNet, according to executive director Craig Powell in an interview. The 14-year-old Dayton nonprofit has a focus on helping former prisoners transition back into society in a way that benefits the community, Powell said. To do so, it offers not only help with housing and jobs, but also programs in leadership development.

“The only way you can earn your way back into the community is to do more than when you left,” Powell said. “Just coming back and staying out of trouble isn’t good enough. You need to get involved, to make the community better.”

In sponsoring the creation and production of the play about prisoners, Powell is returning to his roots as an actor — he has performed off-Broadway — and he believes the play’s message can help the PowerNet mission in a new way.

“Our business has to include more than providing direct services to individuals. It has to include public awareness and advocacy to break down the political and social barriers that ex-prisoners encounter,” he said. “I want people to leave this play with an expanded awareness and perhaps conversations that they haven’t had before.”

The current project grew from two threads in Dallas’ life that he found especially powerful. About 20 years ago he taught in two men’s prisons, in Lebanon and Warren, Ohio, guiding the men in creating a play about life while incarcerated.

“I knew what troubled and interesting lives inmates had,” he wrote in an email.

He also had experience shaping people’s stories into a play, first for the Dayton Stories Project that celebrated the Dayton Bicentennial in 1996 for the Human Race Theatre Company and later, through the Ohio Arts Council, with former residents of a Xenia orphanage. So for several years, he pondered the idea of creating a play from the stories of prisoners.

“This is a different type of theater: an audience hears their own stories literally reflected. Or perhaps literally refracted might be a more accurate way of putting it. At any rate, I wanted to try it,” he wrote.

Dallas approached villager Jonathan Platt with the idea — Platt had worked on a prison project through PowerNet. After Platt introduced Dallas to Powell, the two wrote a grant application to the Ohio Arts Council, and the project was funded.

Powell’s familiarity with the prison and its residents helped smooth the way for Dallas at the project’s beginning. A regular visitor to the prison, Powell was able to introduce Dallas to women who might want to share their stories — 47 turned out to the project’s initial meeting.

But the group has whittled itself down to eight, who now meet regularly with Dallas. They take turns telling their stories in groups of three, with one transcribing the information. The group meets in a prison classroom, a room with beige walls and partitions that separate this activity from others taking place at the same time. Noise bleeds over from next door, Dallas said, and he’s also aware that one side of the room is all glass, through which prison officials can watch.

“It’s a prison,” he said with a shrug. “You’re trying to eke out a private space.”

While privacy can be hard won, the women involved seem undaunted. Dallas has been surprised by the women’s openness in sharing their lives, and their ability to hear each other’s stories. And while there’s no doubt each woman comes from a life studded with hardship and struggles, their stories, with the encouragement of Dallas and Powell, also emphasize moments of strength and their ability to envision better lives for themselves.

For instance, one woman in her 50s had realized at a young age that she was gay, and that knowledge terrified her. She spent much of her childhood hiding under her mother’s bed, incapacitated by her sense of “being wrong,” according to Dallas. Her home life was chaotic and unsupportive and, like most of the prisoners, she drifted into a life of early drug use, then grew up presenting herself as a tough woman who intimidated others.

But a trusted friend saw kindness and gentleness in the woman that she couldn’t see for herself, and gradually that vision of herself as a good person emerged so that she could live with integrity — now she has a wife and children, and plans to turn her life around when she leaves prison.

“I find her extraordinarily open and wise,” Dallas said.

He is similarly moved by other women’s stories, and their ability to find hope in the most unlikely of places.

“The place where the women keep coming to is a place of discovery, of self-illumination,” he said.

Witnessing these stories has helped him become more open as well, Dallas said. And while the process will take a while, he is looking ahead to the time when he can share the women’s stories with the wider community.

Dallas believes that, while the specifics of the women’s lives may be different from the lives of the audience members, their humanity is very much the same.

“I hope the audience comes away with a deep sense of reflection on self, and a desire to reflect in a way that’s embracing, not defensive, a way that opens the world up to you,” he said.