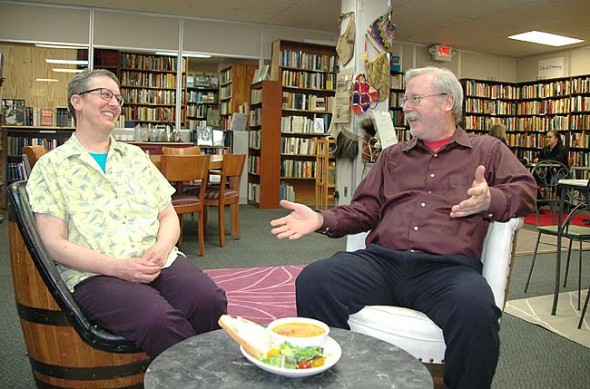 Tomes and treats ‘not that far’

Pop quiz: where can you find eclectic delectables such as Persian lamb and eggplant stew, Hungarian mushroom soup and Okinawan “taco rice” in an atmosphere that’s casual yet bookish — deeply bookish, thousands of volumes of bookishness — in a room that’s adorned, strikingly, with colorful woven bags called bilum, native to Papua New Guinea?

If you answered Yellow Springs, you’re only off by about nine miles.

Tables of Contents Café is the newest offering of Blue Jacket Books, the Xenia bookstore owned by husband-and-wife team Lawrence Hammar and Cassandra Lee of Yellow Springs. The café, which opened at the end of December, is situated in the big central room, the heart, of the labyrinthine bookstore at 30 S. Detroit St. There’s something a little taboo about eating among all those books, Hammar acknowledged.

“It’s like a big library that you can eat food in,” he said in a quiet moment before closing this past Saturday.

The café is Lee’s brainchild. “I’ve been in and out of food service most of my life,” she said, having owned and operated cafés and restaurants in her native Portland, Ore. She grew up cooking for a big family, she said, which means she “can’t make a small pot of anything.”

The couple bought Blue Jacket Books from its founder, Elizabeth Svendsen, in October 2011. The business was originally housed a few doors down on the same block of S. Detroit Street; after just a year at that location, Hammar and Lee moved to the current building, the former site of the Xenia Daily Gazette and the headquarters of the local Obama reelection campaign.

“When we came into this building different rooms spoke to me. From the beginning this room was a dining room,” said Lee, gesturing a bit shyly around the large, well-lit space. And the former Gazette employee break room converted readily to a kitchen, she added.

The store’s move was prompted by catastrophe. In January 2013, about a year after the couple took over the business at its first location, burst pipes in the ceiling flooded the store, ruining 20,000 books — half of Blue Jacket’s inventory at the time.

“We almost chucked it in,” said Hammar. “We were facing so much financial stress. We came within a few hours of saying, ‘Enough is enough.’” But original owner Svendsen, who was still in town, knew that a “wonderful” landlord, Greg Bernitt, was renting a building on the same block, and Hammar and Lee quickly had a deal for 6,000 square feet, plus basement access.

In the three years since then, Blue Jacket Books has, against the odds and the elements, begun to build a viable business. The bookstore sells online, but it also draws bibliophiles from Springfield, Jamestown, Oakwood, Wilmington, Columbus, Cincinnati and even Indianapolis.

“More and more, book lovers will make the drive,” said Hammar, noting that many communities no longer have bookstores or have only bargain bookstores without knowledgeable staff.

By contrast, Blue Jacket Books stocks roughly 50,000 used, collectible and rare volumes on dozens of subjects ranging from Africana to Medieval and Renaissance studies to voodoo. It has a book-smart staff; Nick Rys, of Yellow Springs, is one. The store has deep collections on gender and sexuality, HIV/AIDS and anthropology, all areas of professional interest to Hammar, who has a Ph.D. in medical anthropology and has taught at various area colleges.

If this sounds like perfect fare for Yellow Springs readers, Hammar would agree. But getting Yellow Springers to Xenia is a challenge, he said.

“If we had a motto — and I say this somewhat tongue-in-cheek, with a smile on my face — it would be, ‘For Christ’s sake, it’s not that far,’” said Hammar, who was, true to his word, smiling. Exasperation aside, he said he understands and appreciates the “be true to your school” loyalty of Yellow Springers to local merchants. The couple moved to the village, from Portland, Ore., in December 2007, and share the prevailing sense that “you can get everything there.”

Still, Yellow Springers seem to be responding to the lure of good food. “We’re getting a hell of a lot more people to the bookstore since the café opened,” Hammar said, referring both to patrons from Yellow Springs and from other communities. “The café makes us a real destination.” (Customers who arrive on bike receive a 10 percent discount on books.)

So far the café hasn’t needed to advertise, said Lee; Facebook and word of mouth have brought in diners. The café doesn’t have a fixed menu, though some favorites, like zesty tomato soup, appear regularly. Lee said she and the café’s other chef, James Luckett, also of Yellow Springs, like the adventure of developing different dishes each week. The café’s Facebook page features dish descriptions and pictures for the day’s offerings. The food leans vegetarian, and “probably 70 to 80 percent is organic,” according to Lee.

Tables of Contents is open Monday through Saturday, 10 a.m. to 3 p.m., and serves lunch and what Lee called “take-away dinners” — fresh-made soups, breads, salads and desserts, an area of business she is working to develop.

Luckett, a former baker at the Emporium and an adjunct professor of photography at several area colleges, including Antioch College, is a longtime home cook who studied cooking and worked as a caterer while living for six years in Japan. He described the café’s dishes as “homestyle food — good food but simple food … not too fancy,” and said the chance to cook with Lee was a draw. Lee credits Luckett with precision and subtlety in contrast to her own “throw it together” approach (she never uses recipes). “We are two different personalities in the kitchen,” she said.

“They’re fun to watch,” said Hammar. “They seemingly complica…” — he paused and corrected himself — “complement each other.”

“And complicate each other,” Lee laughed, catching Hammar’s slip.

According to Hammar, the café and bookstore aren’t the only reasons for Yellow Springers to drive, or bike, southward. Partly to cover rent, but also to build a “community hub,” he said, Blue Jacket is currently subletting space to five local enterprises: Live and Let Dye, a hair salon owned by Gayle Sampson of Yellow Springs; Yellow Dog, owned by Pete Waltz and Carol Flory, also of Yellow Springs, and offering healthy dog treats and other products; Our Family Soap, a maker and purveyor of handcrafted soaps (their soap laboratory is also in the building); an eBay business; and Noble Circle, an area nonprofit for women who’ve survived cancer (Lee, a survivor, is involved both as participant and program coordinator).

“These are all good and decent people who have Yellow Springs values — but who can’t afford to rent there,” said Hammar.

And the Blue Jacket nexus is just a part of the growing Yellow Springs vibe in Xenia, he added. There’s Ha Ha Xenia, the second location of the Yellow Springs original; the longtime Xenia Shoe and Leather, owned by Yellow Springer Tim Sontag; and, more recently, vegan bakery Harvest Moon, started in 2013 by Chris and Andrea Hutson of Yellow Springs. “Vegan twinkies!” said Hammar. “What more reason do you need?”

Some villagers are calling the cluster of shops Yellow Springs Annex, or Yellow Springs South, Hammar confirmed. And while downtown Xenia still has plenty of vacant storefronts, not to mention a bail bond company and a pawn shop, Blue Jacket Books’ flag was flying last Saturday, and the store, while not busy, had a hum of life. Buyers and browsers didn’t just dart in and out; they loafed, leafed and lingered.

Tables of Contents is the newcomer on the scene, but its colorful kaleidoscope of homemade dishes might be the eye-opener Blue Jacket needs.

“Hopefully people will see that there’s a pretty remarkable bookstore wrapped around a café,” said Lee.