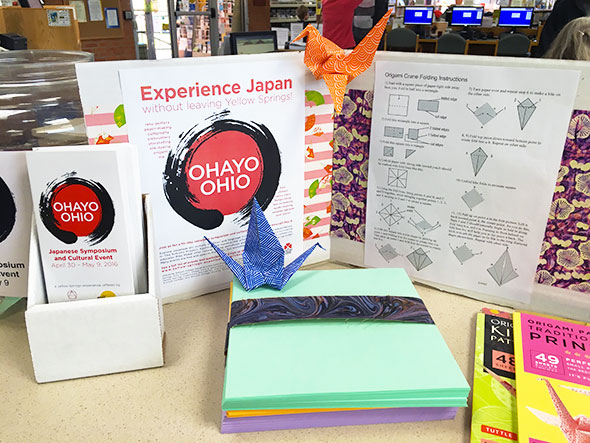 Normally when I stand at the library’s reference desk, I’m here to work on the community jigsaw puzzle. Today I am learning origami. The first folds are like a magic trick. Three folds transform a piece of paper to a square half its original size. The secret I learn is to heed which side of the paper kiss. I select a square sheet beautifully patterned with orange flowers on one side, blank white on the other. I lay the square before me orange side up, match the lower left-hand corner to the upper right-hand corner, and form a white triangle.

This is a valley fold I am told by a tall gentleman that I meet at the reference desk. Curious at his description, I open my first fold and turn the sheet right side up. Indeed, valley is an apt description: The unfolded crease cuts a diagonal trench through my patch of orange flowers. My companion shows me a mountain fold next. Copying him, I flip my paper open but this time the square is patterned side down. I fold the square in half so that it forms an orange rectangle.

Now when I open to the original square, the fresh crease forms a ridge lined with blossoms. I rotate the square 90 degrees and reshape it again into an orange rectangle. When I open the paper for a third time, I observe three folds—one diagonal valley, two perpendicular mountain—which meet at a single point in the center of the paper.

Here is where the magic happens. I hold the paper along the valley fold and pinch the two diagonally aligned corners together. On either side of the pinch, two symmetric pockets form each with a diamond-shaped flap blocked out by the mountain folds. I press the diamonds together; they overlay readily. Voilà! The paper square forms into a paper diamond half the size of the original sheet.

My companion is like a human iron. He tames his creation into crisp angles. His neat edges have industrial-like quality to them. Rather like a tea sandwich with the crust cut off.

Together we are making paper cranes. To he the master, I am the apprentice, listening rapt to his stories as we wrap tiny jeweled boxes. I make a few observations myself. Many of the folds that compose the crane appear like kites…or perhaps more fittingly as long tall feathers. I make two cranes, and then he teaches me how to alter the folds of the tail feathers so that they cause the crane’s wings to flap when pulled.

I leave the library quite ennobled to the cause: making 1000 cranes by month’s end. By the time I return, I’ve begun to recruit others. At my daughter’s elementary school, I demonstrated just the first four steps—valley fold, mountain fold, mountain fold, pinch—letting the intriguing art of origami reveal itself.

Saturday, however, I am at the library for another purpose. I am here to revive a long time tradition of afternoon tea at the library. I am apprentice once again but this time to head librarian Connie Collett and Yellow Springs Library Association Beatrix Karthaus-Hunt. The idea for the tea sprung from the 50th anniversary celebration of the library at Xenia Avenue. For the occasion, the library’s tea set was displayed in homage to the ladies’ group that founded the library and held afternoon teas until the mid 1980s. Longstanding members of the library association saw the tea set and wondered aloud if the teas could be reinstated. Collett and Karthaus-Hunt were charmed into action and took up the charge. The event was planned for the early spring when a warm cup of tea and a cool cucumber sandwich would be just the thing.

The Yellow Springs Library Association came forward to host the event. In researching the library building’s anniversary, YSLA Board President Karthaus-Hunt found a hand-fashioned recipe book among the library’s archived documents in the Green Room of the Xenia Community Library. She sought the book out again as it contained recipes from the traditional teas. She keyed in on the step by step instructions for long-time favorites cucumber sandwiches and watercress sandwiches mentioned by the members in their reminiscing.

For the tea, we needed a ready supply of nearly but not quite boiling water. I brought my electric tea kettle from home which heats water to 208 degrees. In the library kitchenette, I unplugged the microwave to make way for our collection of electric kettles. We had three in all. I knew the kettles needed to plug directly into the wall and, if paired with other appliances, they’d run the risk of overloading their circuits.

Collett engaged reenactor Ann Armstrong who presented a program on the underpinnings of 18th century dress. Wearing clothes from the 18th century, she passed around finely preserved linens that served as undergarments for the women of those times. She was just beginning to discuss the expense and care needed to maintain such garments when I reluctantly left the room to check on our three kettles of water. I found all of the kettles off. Not only off but unresponsive. Back in the 21st century, I had blown a fuse, perhaps two. While one librarian examined the library fuse box, another librarian helped me source out a more dispersed set of outlets to power our appliances. I had to sit next to one unit out near the magazine rack of the library, but soon we had several liters of piping hot water. We began steeping tea. 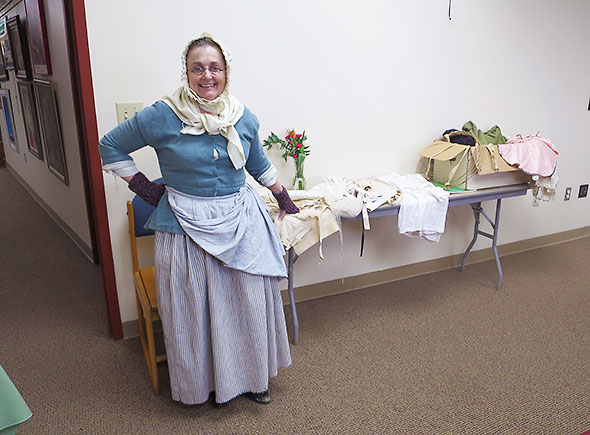 I returned to the community meeting room in good enough time to examine several undergarments that had made their way to the back of the room. My favorites were the cotton pantaloons with intricately stitched eyelets and a bra fashioned entirely in interlocking crochet. There was also a green pair of knickers that looked and felt wonderfully comfortable. The knickers were designed with a high waist and a slight poof at the thigh; they seemed just the thing to wear on a spring afternoon under an ankle-length skirt.

Armstrong gave a wonderful presentation…keeping her listeners in stitches throughout. Even when I was out in the main library tending to my kettle, I could her audience break into laughter. I had more than one library parishioner pull me aside to ask if i knew what was going on.

Collett and Karthaus-Hunt were greatly pleased with the response to the event. They had wondered if an afternoon tea would be met with favor. Happily, it was. Reservations filled up to full capacity; the Virginia Hamilton meeting room was buzzing with interest and anticipation. When we transitioned to the tea, Karthaus-Hunt and I played mother…pouring steaming cups of black, green, and herbal tea into the cups of our guests. They helped themselves to the watercress and cucumber sandwiches. The traditional recipe was met with great favor and nostalgia…though we did earn a few teasing remarks for not removing the bread crusts before serving. I was charmed by two guests with a British background who demonstrated how they pour milk in their tea cups before adding the steeped tea. Their attention to this detail did seem just right though I do admit it’s rather fun to watch billowing plums of cream bloom unevenly into golden liquid.

After the members settled in to visit, I balanced a cup of tea and lemon on my own plate and collected a colorful accompaniment of fruit and sandwiches to support it. I sat down in the far corner of the room next to fellow blogger Lauren Show and youTuber Erica Wyant. I sat back there, as I believe all three of us did, to watch the scene unfold…to watch those who had lived the tradition many times before walk happily through this reenactment. We were also ready to be please. The three of us—Shows, Wyant, and myself—fell in sync enjoying the chumminess of the high tea devoid of stuffy strictures. Karthaus-Hunt joined us beaming with the event’s undeniable success. We raised our cups to her…our pinkies held high in salute.

As the crowd drifted out, I stayed behind to clean up and clear the room. When I left the library just after 5pm, I passed the reference table and found it overbrimming with paper cranes. These are fine traditions that we bring back to the fore: the art of hospitality and the art of charm. In them, we fold ourselves alighting on surprise and delight.