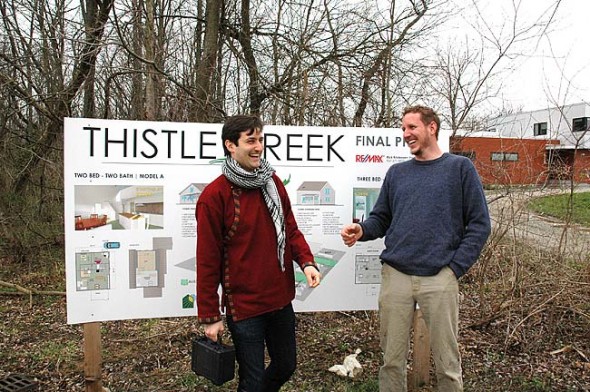 Kline and Melamed are perhaps best known for building four passive homes in Yellow Springs, one of them, at 515 Dayton St., the first certified passive house in Ohio. With the new project, the design-build partners are taking their work in a different direction.

“There’s a lack of new housing stock in Yellow Springs,” Kline said recently. “We hope to address that with this project.”

Green Generation’s concept for Thistle Creek is to build reasonably affordable homes “designed for modern living” that are low maintenance and energy efficient, according to Melamed, the design half of the team. Real estate in Yellow Springs is relatively expensive, Kline noted, and many of the homes on the market require significant renovation or updates, compounding the purchase price.

While the new homes are not passive houses, they will incorporate building techniques drawn from passive house construction, according to Kline. Specifically, the homes will be built “tight” and will include a distributed fresh air and heat recycling system that Melamed described as “little ports in the wall with a heat recovery core that looks like a ceramic honeycomb.” Though this system is readily available, it’s not in wide use in conventional housing construction, he said.

The homes also will have radiant heat, which “people can integrate with solar hot water if they want to,” said Kline, a step that would add to the cost.

“All of these homes can be made more energy efficient,” said Kline. “If homebuyers are willing to pay more, we can customize them in various ways.”

But Kline and Melamed emphasized that they’re seeking to strike a balance between energy efficiency and upfront costs with their home designs for Thistle Creek.

“There’s no doubt that highly energy efficient homes require more materials and more design, so there’s more upfront cost — but they save you money in the long run,” said Melamed. The Thistle Creek homes are more energy efficient than conventional homes, he said, while the purchase price is lower than a “passive all the way on carbon” home would be.

Thistle Creek has been a site of experimentation from the start. Beginning in 2005, Brown built six Home, Inc. homes on the site, all of them designed for solar gain and energy efficiency. In the next few years, several lots were purchased by buyers who built market-rate, single-family homes. Building slowed with the market crash, according to Re/Max realtor Kristensen, then in 2011, Brown and Eastman developed three passive homes on spec. Today, there are 13 homes in the neighborhood — an eclectic mix of designs — with six more lots available for building by Green Generation.

But the neighborhood’s experimentation extends beyond building techniques. The site is zoned using a Planned Unit Development, or PUD, ordinance, which allowed Brown to subdivide it into small plots. The lots are small, but they share a common green space, mostly woods. And because Brown favored “low-impact construction,” said Kline, many trees were undisturbed, giving the neighborhoods a “woodsy” feel. Thistle Creek borders the Glass Farm wetland, over seven acres of land that Tecumseh Land Trust, with a grant from Clean Ohio, is putting under easement.

Green Generation’s involvement in the final phase of Thistle Creek came about through an agreement with landowner Eastman, who was seeking developers for the remaining lots, according to Kline.

“When the opportunity came up, we thought about it for a while and decided we wanted to go ahead. We’re happy to be taking this on,” said Kline.

Melamed sees the firm’s work at Thistle Creek as a continuation of a local legacy. “There’s been a slow handshake — a baton pass — between local green builders,” he said. Each builder has done “creative things” at Thistle Creek, he added, a trend Green Generation hopes to continue.

As the latest generation in a local line of green building experimenters, Kline and Melamed have been working together since 2009, when Kline, in partnership with his father-in-law, Roi Qualls, founded Green Generation. Kline is a 2003 graduate of Antioch College, where he majored in environmental studies. He’s “always been into building things,” he said, and Green Generation combines that interest with his environmental ethos. Melamed, who describes himself as “an environmentalist and artistically inclined,” has a master’s of architecture degree from Savannah College of Art and Design. He joined Green Generation in late 2009, working with Kline on the firm’s certified passive home, then left Yellow Springs for two years, returning in 2012 to settle in the village.

With their new project, the two business partners and friends are staking a claim on a piece of Yellow Springs development history. All six of the lots await buyers; Green Generation and Re/Max have just recently begun to market the homes.