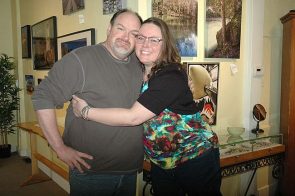 Art school graduates Chris and Katie Brandt recently launched the Brandt Gallery on Xenia Avenue as a studio and exhibition space, fulfilling a dream to put art back at the center of their lives after 20 years working in corporate fields. (Photo by Carol Simmons)

The opening of a new art gallery downtown has been “a labor of love” for owners Katie and Chris Brandt, who describe their venture into full-time art-making and exhibition via their eponymous Brandt Gallery as the realization of a dream deferred.

Sitting in the light-filled space on a recent Saturday afternoon, Katie Brandt says she has a clear memory of the moment this past December when she realized she needed to make a U-turn in the career path she had been following for 20 years.

“It was a really pivotal moment,” she said. “I was sitting in my cube. I just couldn’t do it anymore.”

Like many people, Brandt’s career evolution had been just that, an evolution. From fine art studies at Wright State University, to graphic design at Wright-Patterson Air Force Base, to the completion of an MBA, to pricing analysis at LexisNexis, to large-scale marketing projects for an international construction-industry provider, her days no longer included the activity that once defined her sense of self in the world — art-making.

“My career kept going off in this business, numbers career path,” she said.

She had achieved a certain success in “a nice, cushy, corporate job,” but she missed the art, she needed the art.

Her husband, Chris, was in a similar art-life-work quandry. He had started out in the fine arts department at Sinclair Community College, where he shifted from sculpture studies to photography. He went on to get a bachelor’s degree in information systems at Bowling Green State University, and then went to work for the Regional Transit Authority, or RTA, in Dayton.

The couple, who married in 1996, were making a comfortable, secure life for themselves and their two sons, Daniel and Jason, now 11 and 9 respectively.

But they found themselves increasingly uncomfortable in the work they were doing — and not doing.

Chris took the plunge first, leaving his RTA job two years ago to pursue photography professionally. “That was building up to [opening] this gallery,” Katie said.

After her personal workplace epiphany, Katie told Chris over dinner at Sunrise Cafe that she wanted to quit her job as well and open a gallery that would also serve as an art studio.

Fantastically, and fortuitously, as they left the restaurant, they saw just down the block a “For Rent” sign being taped to the door at 253 Xenia Ave., the former home of Eden World Center for Wellness and Discovery.

A sign for Brandt Gallery now hangs from that door, with a larger sign in the window as well. And the walls and display surfaces inside are full of photographs and multi-media pieces created by Katie, Chris and other locally based artists, including a picture by elder son Daniel.

The photos range in size and subject matter, including the natural beauty of nearby Glen Helen Preserve, John Bryan State Park and Clifton Gorge. Woodwork, jewelry, folk art and souvenirs are also available for sale at costs set to appeal to area tourists who may wander in.

“This is a very exciting space for us.” Katie said. “It was a complete open slate.”

The gallery opened to the public at the end of March. “We didn’t advertise, we just opened the doors,” Katie said.

The welcome from the local arts community has been gratifying, she said. “All these artists have been flooding in, and it’s been wonderful.”

She said she’s excited about the possibility of forming artistic partnerships and sharing the space with creative activities and events.

“It’s hard to be an artist,” she said. It’s even harder “to create art in a vacuum. I feel like I’ve been in a vacuum for a really long time.”

A Yellow Springs location was also important to the couple.

“When we talked about opening a gallery and having a studio, I couldn’t think of any place but here,” Katie said. “It’s where I feel inspired.”

“We’ve always lived in the area,” she said. Katie grew up in Xenia, where her father was director of the Greene County Library system, and Chris spent much of his growing up years in New Carlisle. Their first date was a hike in Glen Helen in 1995. “He proposed to me that day in the pine forest,” Katie said.

The family now lives in the home Chris’s mother moved to in 1990 near Twin Towers Park off Yellow Springs–Fairfield Road.

While Katie has recently been filling in two days a week for a Yellow Springs News staff member on maternity leave, she spends the rest of the week’s work hours at the gallery.

“It’s my studio — I can come in and play,” she said. She said she’s currently working on sculptures and 3-D peieces and “experimenting in paper mache.” She’s inspired by Appalachian folk art.

Ironically for Chris, just as the gallery was getting underway, he answered a call from RTA to work temporarily for an employee who had been deployed. But he’s committed to getting back to his art full time.

“I think that if anybody has the chance to do something to be more fulfilled, they should jump at it.” he said.