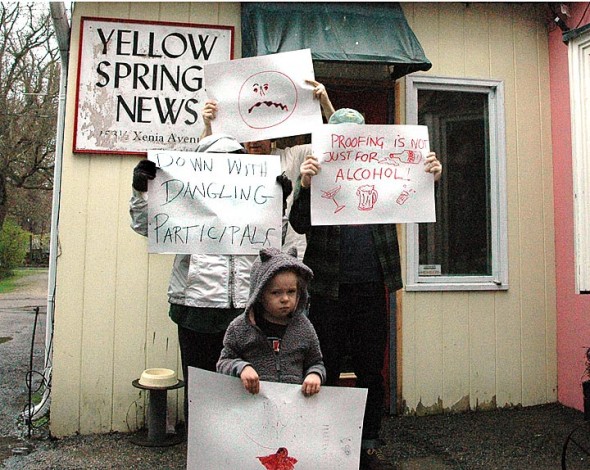 Three-and-a-half of the six members of the group People in Opposition to Oppressively Poor Editing, or POOPE, gathered outside the News to voice there complaints about its editing policies.

The YS News has come under fire recently for what some perceive as sloppy grammatical standards and practices. A group of local citizens calling themselves People in Opposition to Oppressively Poor Editing, or POOPE, took the News to task recently at a protest downtown. Mebers of the group, of which there are about a half dozen, marched in a tight circle holding sings that bore admonitions like “Down With Dangling Participles” and “Cover Your ‘Buts’ — Don’t Start Sentences With Conjunctions.”

“Frankly, it’s a travesty,” said POOPE member, Brain Hurtz. “I can’t believe some of the stuff you all print. Look, I took a journalism class in college and I ocassionally read the New York Times, so I’m pretty principaled on this. Last week I counted three incorrectly used semi-colons. Three! Is nothing scared?”

YS News editor-in-cheif Dana Cheddarsteer responded to the criticism in an editorial last week, in witch she noted POOPE concerns and promised to adress them. “We’re a small staph here at the News, so there are bound to be some errors from time to tim, but we want to tank POOPE for pointing out areas wear we can work harder to remain a paper the hole community can be proud of.”

This editorial scent POOPE members in two a frenzey on the group’s Facebock page. Rote one angry member: “ARE YOU KIDING ME WITH THAT STRANDED PREPOSITION?”

Inn a atempt too apease reader’s, the Noose has layed of all butt won reporter and highered 5 adishunal prufreeders.

The Yellow Springs News has been the winner of the Osman C. Hooper General Excellence Award in its division since 2009.

One Response to “News criticized for poor editng”