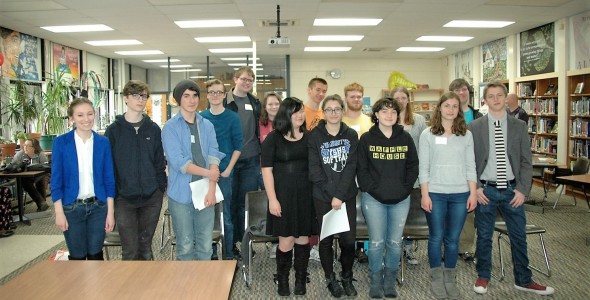 Last Saturday, April 9, 13 Yellow Springs High School students took part in a special high school edition of Power of the Pen, a national writing competition for 7th and 8th graders. The local competition was organized by YSHS seniors Ursula Kremer and Henry Potts-Rubin as the focus of their senior project.

Both Kremer and Potts-Rubin had participated in — and loved — the Power of the Pen as middle school students under McKinney Middle School language arts teacher Aurelia Blake, who runs the program locally. They knew other YSHS students also cherished their previous experience with the program.

So the two seniors decided to organize a similar writing competition at the high school to raise funds for the McKinney program. According to Kremer, $200 was raised on Saturday, which will most likely be used to cover the costs of the annual state competition in Wooster, Ohio.

Saturday’s 13 participants created three stories each. Ranging from humorous to hard-boiled to poignant, the stories illuminated themes of childhood, gender identity, crime, technology, human relationships and the natural world. Each story came to life on the page in just 40 minutes, the time limit set by Power of the Pen. Local writers Lauren Heaton and Audrey Hackett and YSHS English teacher Elizabeth Lutz judged the pieces. Power of the Pen expert Blake was on hand to explain the contest’s rules and approach to judging.

Four students earned prizes: Eilis Price received the day’s “best of the best” award for her story, about a person’s inner conflict around a trans identity, while Aidan Hackett was awarded first prize, Duard Headley second prize and Greta Kremer third prize. And all participating writers finished the day with three new stories to their name — proof of the power of their particular pens.