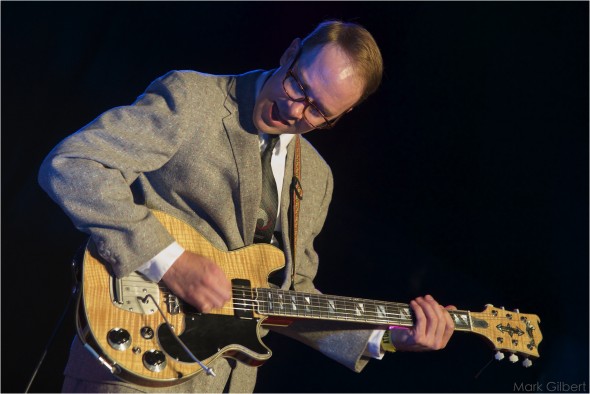 Crazy Joe and the Mad River Outlaws are no strangers to Yellow Springs: the band has performed in the Dayton area and the village itself many a time since they formed more than 15 years ago, even as, over the years, the band’s lineup has changed and members have embarked on other projects. The rockabilly outfit will return to the Springs for a reunion show at the YS Brewery tomorrow, Saturday, April 16, at 8 p.m. Tomorrow also happens to be Record Store Day, an annual celebration of independent record stores which features new and special record releases, which this year includes one from Crazy Joe himself: his Saturday show with the Mad River Outlaws will celebrate the release of a previously unheard instrumental track, “Enon Beach,” which was recorded a few years ago, but which was only recently unearthed.

The discovery of the track came about when Crazy Joe (or Joe Tritschler, as he’s sometimes known) recently pulled up stakes and left his longtime home in Enon — moving to Yellow Springs. Along with being a musician who performs solo and in other incarnations, Tritschler is also an engineering professor at Wright State University, as well as an audio engineer who housed his own custom-built recording studio in Enon. On his website, he describes finding the track during the move: “While packing up the studio, I came across a mysterious 1/4″ reel-to-reel master tape; an instrumental tune in the Latvian surf style that I just never got around to putting out.”

Tritschler concluded that the long-lost track deserved an official release — and not only that, but a release as a 7-inch vinyl record.

I got in touch with Tritschler this week via email, and he answered a few questions about the upcoming show and the super-secret track, “Enon Beach.”

Lauren Shows: So, first, the obvious (and probably easily Googled, but bear with me) question: How long have you been making music? You’re also an engineering professor at WSU; would you say that there’s one of these two passions that supersedes the other? Or have you found a way to marry the two, as it were?

Crazy Joe: That’s a very interesting question! My music and teaching careers are really very separate and I can’t honestly say one supersedes the other; they are both so important in my life.  My first professional club gig was in 2001 and that’s the same year I started teaching, initially as a grad student.  I never realized that until now! The strict timetable of the academic year means I can’t go on tour in the middle of a semester, so in that sense the teaching gig wins by default; but I still get to play festivals in Europe and all kinds of stuff when it doesn’t conflict with my academic schedule.  I’m incredibly fortunate to get to do that. … Music and engineering; now that’s a marriage and the manifestation of that is all the audio engineering and studio design work.  That’s just as important to me as playing and teaching.

LS: How often do you perform these days? The press release [about the upcoming show] says [it’s] a “reunion”: is that how you’d characterize it?

CJ: Well, “reunion” refers to the band Crazy Joe and the Mad River Outlaws.  We’ve been together since 2000, but after I went pro and toured for a couple years and made some “solo” records it wasn’t my main group for a while.  Matt Duffey and I have known each other over 20 years now; he’ll always be the Mad River Outlaws’ bassist and there will always be Mad River Outlaws shows.  In fact, we’re playing the YS Street Fair this June.  Our drummer Kyle Eldridge is another story altogether; he’s been with us for maybe five years, but really he’s a killer western swing guitar player and singer.

LS: About “Enon Beach” — when did you record the song?

CJ: “Enon Beach” came about in late 2013, right after I finished recording Rob Heiliger’s album “Crazy Is Forever.”  I’m very proud of Rob’s record, by the way; it might be the best thing I’ve ever produced and played on.  Rob is such a brilliant writer and he says he has some songs for me.  Anyway, “Enon Beach” is an instrumental tune in the Latvian surf style.  Nothing like anything I’ve ever put out.

LS: I kind of have to admit: I do not know what “Latvian surf style” is, so I definitely want to hear that track!

CJ: Are you familiar with the Mulchmen, surf band from Dayton in the 1990s featuring Nick Kizirnis on guitar?  Nick’s heritage is Latvian, so they always called it that … and I am a huge Mulchmen fanatic.

LS: What made you decide to have the song pressed? Who did the pressing? Is it serendipity that you’re releasing it on Record Store Day, or was this all part of your brilliant plan?

CJ: It’s so different than any of my other records; it just seemed natural to make it a 45. Musicol pressed it in Columbus, same outfit that mastered it.  The cutting engineer is a fellow named John Hull who is 86 and sharp as a tack.  He’s been cutting vinyl for 60 years!  The thing with vinyl pressing these days, it’s so popular right now the turnaround time is twenty weeks minimum for an order.  All the plants are backed up like that.  I originally wanted to get it out for the holidays!  So much for that.  I wish I could say it was all part of a brilliant plan, but since I’ve never had one of those, I might as well admit that it just worked out that way.

LS: Anything else you think we ought to know?

Well, many people already know that my wife Amy is a brilliant musician; ten times the singer I’ll ever be.  We sang together at our wedding and it was just marvelous.  I could see us collaborating in several very different ways.  But first I intend to get my new studio operational, as soon as I get back from the Rockabilly Rave in England this June.

Those who can’t wait until the show tomorrow, good news: “Enon Beach” will actually debut tonight at 8 p.m. on WYSO 91.3 during “Around the Fringe.” The record will be available at Toxic Beauty Records for Record Store Day, and will, of course, be available at the show at the YS Brewery tomorrow night.

And, tying it all together, tomorrow night the YS Brewery will release a new brew perfect for audiophiles, a hoppy Belgian co-crafted with the Fifth Street Brewpub named, appropriately, “180g.”