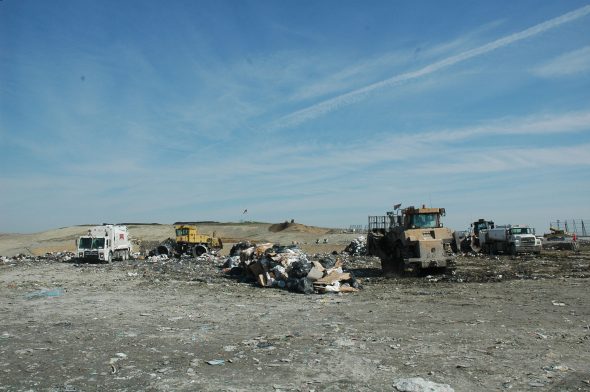 The Rumpke Landfill and Recycling Center: a YS News pictorial

An article published in this week’s paper discusses a recent tour of the Rumpke landfill and recycling center organized by Vickie Hennessy and Zero Waste Yellow Springs. Words cannot do the facilities justice. The insane bustle of the recycling center, the trucks and machines plowing through the current dumpsites, the yawning chasm that will be a future landfill – all otherworldly sights, yet a common and (unfortunately) necessary part of life. 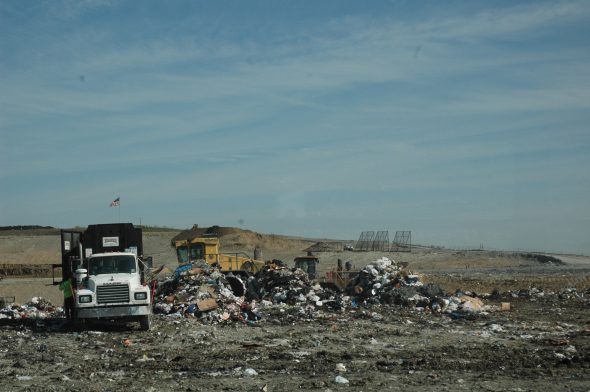 Rumpke has a fleet of trucks that collect garbage and recycling from many communities within a 60-mile radius. In addition to Rumpke’s 400 trucks, contractors, civilians, and even competing waste collection companies use the Rumpke landfill. At 1,000 acres (334 of which are used for trash), the landfill is the largest in Ohio, and the sixth largest in the country. Approximately 6,000 tons of garbage are dumped every day. 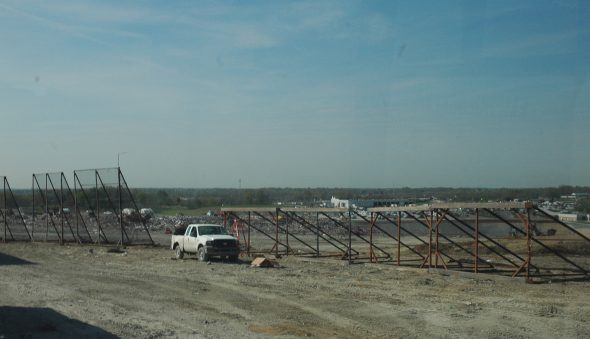 These fence-like apparatuses are designed to catch flying plastic bags. 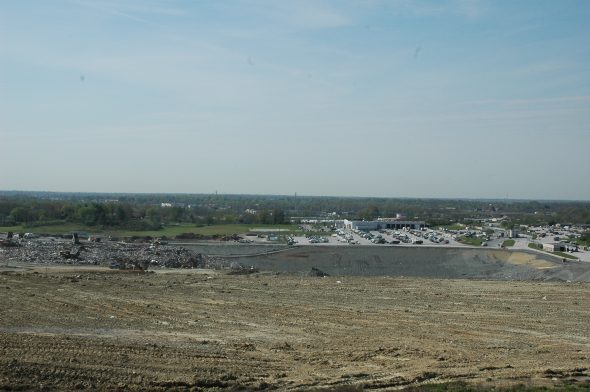 Making our way to the summit of Mount Rumpke, the landfill unfolded below us. To the left are a few of the hundreds of trucks that dump at the facility every day. To the right is the future dumpsite, a 13-acre pit that will begin taking garbage later this summer. 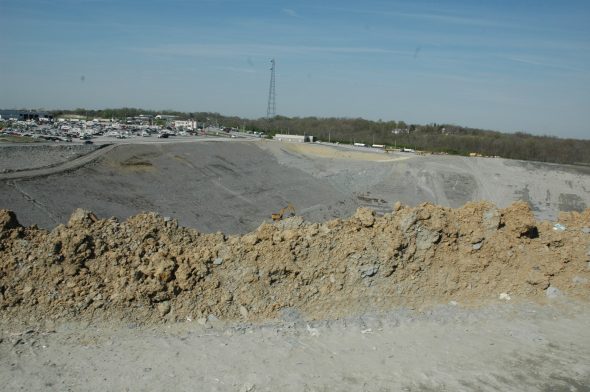 Another shot of the future landfill. Machines are excavating the bottom. Three feet of an impermeable clay liner is the first step in a series of layers said to prevent leakage of leachate, or garbage juice, from escaping the landfill. 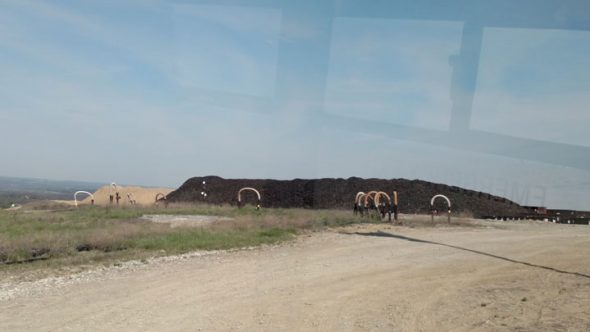 The tubes going in and out of the ground are wells that harness the gas from decomposing garbage. The mixture of carbon dioxide, methane, and trace amounts of other gas is collected and used to power some of Rumpke’s trucks. Molly Yeager, the Rumpke representative who led the tour, said the decomposition process is why landfills often smell more like natural gas than garbage. 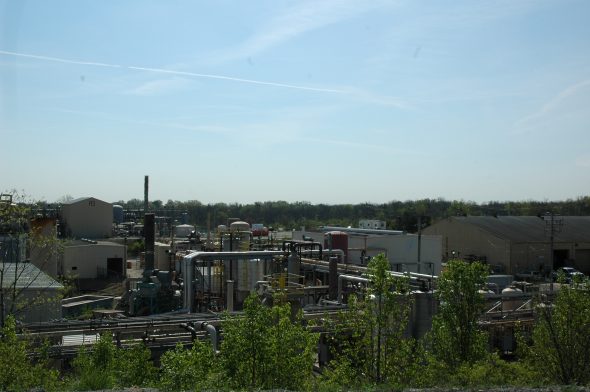 On site is a refinery that converts this gas to a usable energy source. It is the largest such refinery in the country. 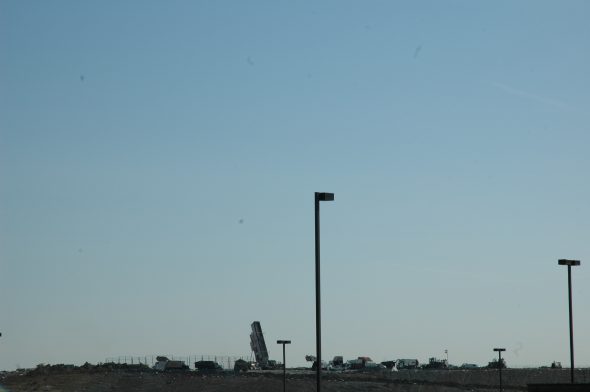 Yeager highlighted a few interesting things buried on the Rumpke property: a circus elephant (buried away from the garbage and commemorated with a pear tree), the world’s largest Hershey bar, and the remains of “Touchdown Jesus,” an enormous sculpture of Jesus that caught on fire when it was struck by lighting. Companies will send employees to watch proprietary or on-spec items get destroyed and buried.The company respects the privacy of garbage: “If you put it in your trash can,” said Yeager, “you intended it to go away.”

The company has protocol when it finds something of dubious legality. Police respond to any firearms found in the dump, which do pop up from time to time. People who accidentally throw things away can pay to search through the contents of the truck serving their area, provided it hasn’t dumped yet. Yeager said a set of $5,000 dentures were located this way, though there is a fee for truck-searching. Searchers pay a flat fee for the first 20 minutes, then per minute after that. The fee is steep, Yeager said, to discourage scavenging. 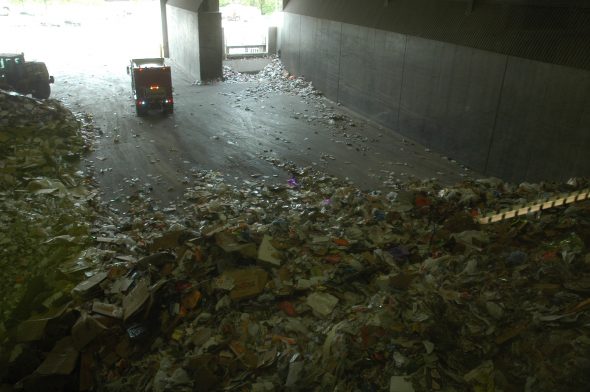 Intake at the recycling facility. Trucks hauling recycling dump their contents in one place. All recycling comes into the facility mixed. This 15,000 square foot bay holds around 2.5 million pounds worth of recycling, or about 2.5 days’ haul. A pile like this, though filling the bay and stretching out through the doors, caught on fire in 2012. Fifteen fire engines were required to fight it, and the company used the fire as a chance to update its facilities. Anne Grey, the Rumpke rep who led the tour of the recycling facility, said that while the fire was tremendous, not one day of recycling and garbage collection was lost. 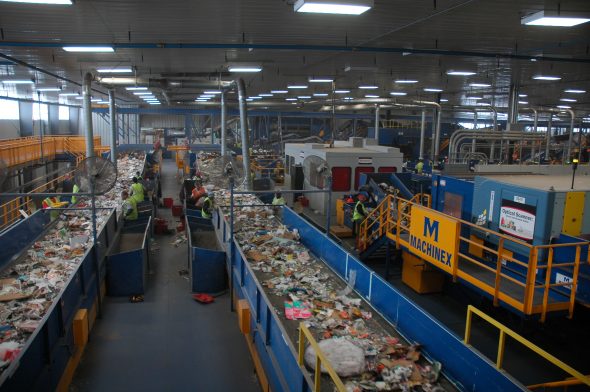 The recycling comes in from the intake bay on conveyor belts. The first step is removing items that are obviously not recyclable, such as wood, scrap metal, and large pieces of plastic. 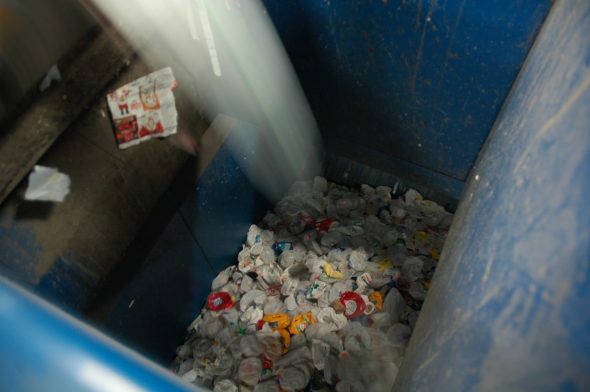 The recyclables are gradually sorted into specific kinds of items. Here a conveyor belt deposits bottle-shaped plastic containers, the only kind of plastics accepted at the Rumpke facility. The items they take depends on the market – these plastic containers, for example, are compressed into bales and sold to companies that can use that specific kind of plastic. Grey said that none of the area’s buyers (an area encompassing most of the Midwest) are interested in other kinds of plastic or items like styrofoam.