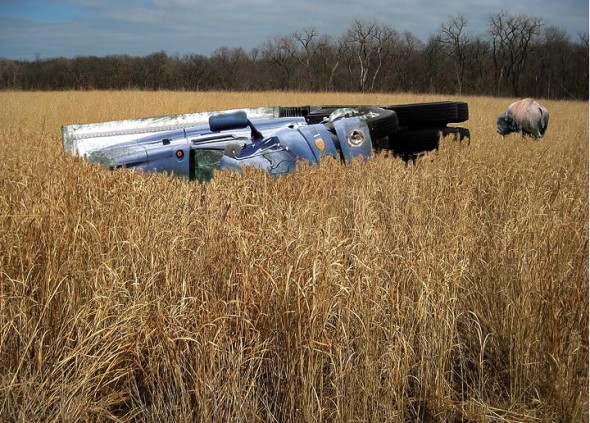 The year-old wreck of a tractor-trailer that was carrying rare prairie grass seeds provides an unorthodox environment for a fragile ecosystem.

It’s not often environmentalists can rejoice over a massive spill on an industrial level. But a recent accident was a rare cause for celebration, and has won them a victory of sorts, though it’s taken almost 15 months for their vindication.

The overturning in the fall of 2014 of a tractor trailer hauling 16 tons of rare native prairie grass seed to a northern Kentucky prairie restoration site initially looked like a disaster for prairie restorationists, with the potential loss of the precious cargo. But 15 months on, the spilled seed has transformed a lackluster field of cultivated sunflowers off US 68, just north of Yellow Springs, into a vibrant prairie.

It has also validated a claim by environmentalists and prairie conservationists to “let it be,” as the battle over whether or not to remove the overturned tractor-trailer from the now-thriving prairie extended into early 2016.

The decision to leave the truck where it fell was reinforced by the second year of prairie grass growth and the appearance of a handful of buffalo.

“[Buffalo] were the key missing component in early attempts at prairie restoration,” Loon says. “And now, they have a reasonable chance at thriving,” given the protection the downed vehicle affords.

Cora McGrist, of the Tecumseh Land Trust, was initially skeptical of environmentalists’ insistence that the truck remain in the field. “It was already a shock to me last year, seeing as the TLT’s trademark sunflower field was rapidly being taken over by this gray-looking grass. Then to leave the truck lying in the middle of it all seemed an outrage.”

But McGrist has come around, noting that biodiversity has increased, and that the rapidly growing sedge and prairie cordgrass would make for a far less maintenance-intensive greenbelt.

However, she balked at the suggestion that, to accommodate the long-term life cycle of some of the grasses, the truck be set on fire periodically. 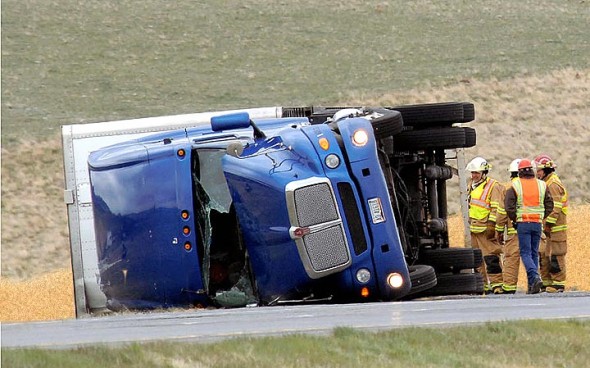 The 2014 overturning of a tractor-trailer resulted in a massive seed spill, and the incidental creation of a vibrant prairie.