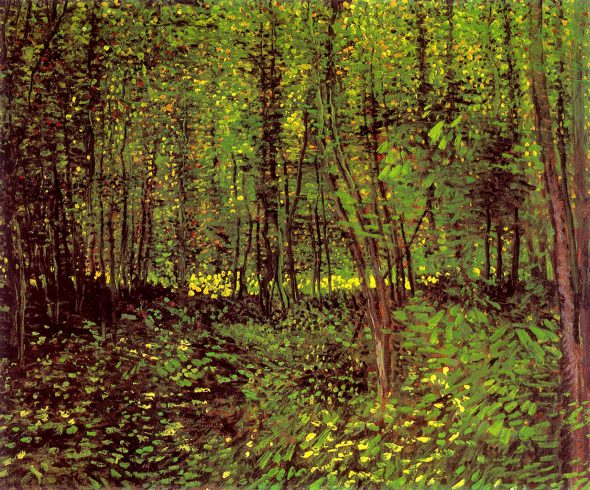 School’s out this week. I remember how it felt to wake up on the first day of summer — a first like no other. No alarm, no gentle wake-up shake from my mother. I could sleep till noon! I didn’t, of course. I woke at six, watched the room turn from grey to golden. I could see the backyard cherry tree from my window, and many other trees besides. I always wanted to sleep in a tree — I once gave my dolls the experience; unfortunately for them, it rained — but lying in bed and fixing my gaze on the canopy of green outside the window, I could pretend. And stay comfortable and dry.

Or did I bounce out of bed on my first morning of freedom? That seems likely, too. One summer I had a tree-climbing route around our neighborhood — eight or nine trees with branches spaced just right for climbing. The route began with a neighbor’s sappy white pine. You haven’t lived until you’ve hoisted yourself up a pine’s resinous sides! My palms were sticky with pitch; drops hardened in my hair. Summer has many commingling smells, and for me fresh pine will always be among them.

Not that summer was pristine. One place where I played was a local creek. It was no stranger to trash; for years, an overturned shopping cart rose like a porous boulder downstream. But the creek was no less enticing for having milk cartons and tin cans among its stones. A friend and I followed that creek (and, yes, waded in its brown waters) with the vague idea that it would lead to the sea. It didn’t; the creek petered out after a while, swallowed by the ravening green of weedy shrubs and trees.

If my exploring instinct met a wall there, it found windows and doors elsewhere. I’m struck, in retrospect, by how much my child self made of relatively little. I didn’t live in the country, but rather in a suburban neighborhood hemmed in on all sides by roads. (The creek? It bordered Interstate 95, the monster road of the eastern seaboard.) But the grassy swales between houses became meadows, the thin margins of trees were forests and the pockets of vegetative neglect (invasive-rife, no doubt) formed a true and precious wilderness. Was it imagination that made this so? Inexperience? The smaller scale of the child? I’m not sure, but the world has never again beckoned in quite the same way.

This is true of summer, too. Memorial Day is here, and there’s a certain frisson I feel, even still. (As a child, my school year extended two weeks into June, but by Memorial Day — let’s face it — school was basically through.) Some part of me remains primed for release. But summer, dear green summer, is no longer its own country. It once was, and that accounted for its magic, I think. Summer was not so much a season — a time — as a place. Time ends. Places last — didn’t it seem that way once? — forever.

And that’s how childhood seems to me, a place more than a time. I still dream about certain things: the creek, the cherry tree in the backyard, the concrete front stoop that was a clean, if somewhat bumpy, slate for drawing. As an adult, I’m an émigré, an exile. Some change of regime took my old country off the map, and I can visit it only in memory, and dreams.

This is the sadness of being grown up, but the child has a sadness, too. She doesn’t actually want to stay a child, or stay in the country of summer, even as some part of her does. The child wants to grow up. Roaming my summer kingdom, I was aware, just barely aware, that I would recross its borders, one day for good. And I was aware of wanting this, and not wanting it. The wanting made summer slightly elegiac. Why else would my friends and I play “school”? All those summer days, on the cool concrete steps outside someone’s home, we played at leaving the time-stilled country and stepping again into the country of time. So summer, like childhood, is not quite the straightforward joy adult memory wishes it to be.

But it is a joy, and I’m feeling it now, a joy that’s colored deep and deeper green. Thirty-five years later, I haven’t lost my love of trees. Every night, I sleep in one — at least, I pretend I do. A maple opens its crown right outside my bedroom window. Many things stir in its leaves.