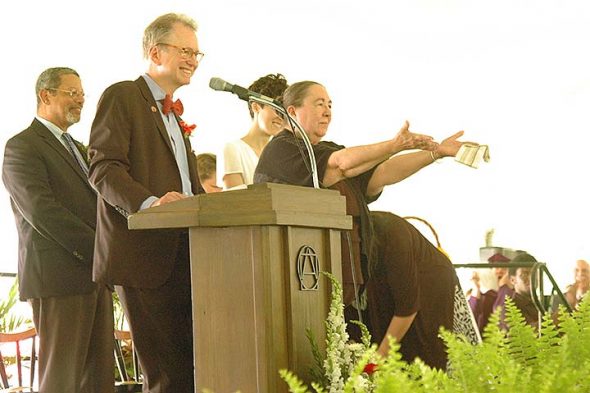 “Anna is known for her warm hugs, her infectious laugh, and her capacity to care about people and let them know that they matter,” College President Tom Manley said at Saturday’s college commencement, in honor of Hogarty, who received a standing ovation.

“I love Antioch. I love you,” Hogarty called out to students, faculty and staff at the ceremony, concisely describing her love affair with the college that began in 1965.

Things were different back then. When Hogarty arrived as a 20-year-old to begin her first Antioch job, the campus was near the historical peak of its enrollment, with more than 2,000 students. Kelly Hall was packed every Saturday at midnight for the latest movies, the college theater drew big crowds and people drove from miles around to eat at the Antioch Inn, which was in full swing.

“There were a lot of people back then,” she said in an interview last week. “There was a lot of activity.”

But while some things have changed, the heart of Antioch College — its students — hasn’t changed, Hogarty believes. Students then and students now are bright, curious, engaged with the world, caring and compassionate, she said. And something about the school — most likely the way students take part in the decision-making process — turns out young people ready to take on the world.

“Don’t ever tell an Antiochian ‘no,’ Hogarty said. “Because they’ll figure out a way to make it a ‘yes.’”

Hogarty has worked  in a variety of jobs for 27 years in total at Antioch, during each of the past six decades. In her first job, she helped recruit students for memory experients at the school’s Behavioral Research Lab, run by Harry Jerison. She left that job after two years and came back in the early 1970s as a secretary for what was then the Union Graduate School (housed on the second floor of Main Building). In the early 1980s Hogarty researched major donors for the alumni development office and helped with the “Class Notes” section of the Antiochian. And from 1995 until the college closure in 2008, she worked as receptionist and provided clerical support for a succession of Antioch presidents, beginning with Jim Crowfoot.

Working in the college president’s office (she also helped out the dean of faculty) was a fascinating job, with an array of compelling individuals, according to Hogarty. However, “there was the stress of watching the slow demise of the college.”

Like all other faculty and staff, Hogarty lost her job when the college closed in 2008. However, after the college reopened at the end of 2009, Hogarty was asked to return. At that point she worked as receptionist and provided clerical support for the advancement office, as well as for President Mark Roosevelt.

Many of Hogarty’s Antioch jobs have involved answering the telephone, and she’s often been the first voice people hear when they call the college (she still is, and doesn’t let the phone ring more than three times). She keeps getting these jobs because she’s good at them, and that’s because she genuinely likes people.

“I’m intrigued by people,” Hogarty said. “I don’t like being categorized and I don’t do that with others. I try to not be judgemental.”

Some might be surprised by what Hogarty sees as the source of her caring for others. Known by most as the daughter of the late co-op professor Bud Hogarty, she was actually a foster child who was adopted by Bud and Sue Hogarty as a teenager. But as a young child she grew up in New York City with her father, an artist, her mother, a concert pianist, and her younger brother. Her mother died first, when Hogarty was 11, then her father when she was 12.

“Losing your parents at such an early age, I think you can’t help but feel empathy for others,” she said.

Hogarty’s empathy was visible last Friday as she sat at her desk in her most recent job, as coordinator of the college mailroom and bookstore, now located in the library. As students filed into the room to pick up their mail, most lingered to say hello to Hogarty, with many moving in for one of her famous hugs.

“This is the best job I’ve ever had,” Hogarty said of her current job. “I love getting to know the students. They’re fantastic.”

The quality of current Antioch students is one reason that Hogarty feels hopeful about the college’s future. She’s absolutely sure that Antioch will receive accreditation in mid-July, and feels that college leaders are constructing a solid foundation for Antioch to grow. Mark Roosevelt was the right man for the job of getting the revived college off the ground, she believes, and now Tom Manley will take Antioch to the next level.

“Mark said, ‘We’re on this train and it’s moving, and now Tom’s here and it’s picking up speed,’” she said.

Having been at the college over decades when staff had to fight for ever-dwindling resources, Hogarty is especially pleased at what she perceives as a new campus culture.

“People don’t seem as territorial as they used to be,” she said. “It feels more like, we’re in this together.”

Hogarty has mixed feelings about leaving the college she has loved for so long, and she especially regrets not working longer under new President Manley, whom she calls “an exceptional leader.” But it’s time for more “me time,” she said, time to read, take walks and visit with friends. Hogarty and her brother, who she’s close to, also plan a trip to New York City to revisit the haunts of their early childhood.

When people hear about her life, they often suggest that Hogarty write a book about it.