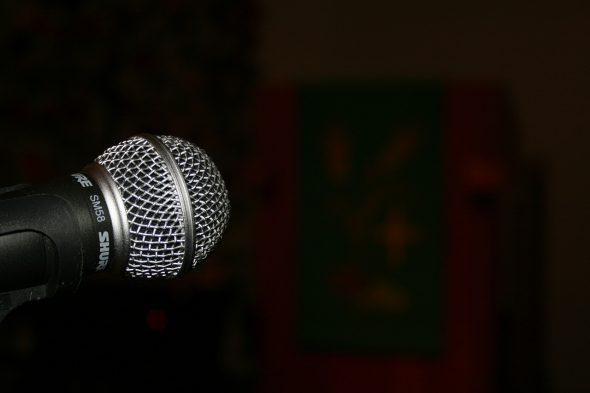 Comedian and artist Luke Capasso will host a dual art and stand-up show at the YSAC Community Gallery on July 2.

Artist and comedian Luke Capasso will host an art show and stand-up comedy special on Saturday, July 2, at the YSAC Community Gallery. The art show will feature pieces by Capasso and will begin at 2 p.m., capped by the comedy show from 8 to 9 p.m. The one-hour comedy set, entitled “Talkn’ Loud & Sayn’ Nothin’,” will be filmed and produced as a comedy special. Capasso will be joined by comedians Wendi Furguson and Dan Sebree.

Capasso grew up in nearby Darke County, in Gettysburg, before moving to England as an adult. There, across the proverbial pond, he first got involved with stand-up comedy. 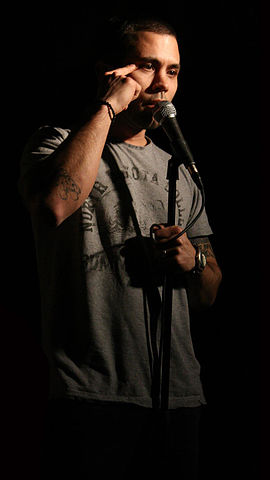 “I started out of boredom when I first moved to London,” he said via email this week. In previous jobs, he said, coworkers noticed his sense of humor and often told him he should be a comedian, and he took the advice to heart. “I took to it quickly, and really felt like I found my place in the world.”

He was immediately active, developing his repertoire by performing four times at the Edinburgh Fringe Festival, on BBC Radio and winning the London Comedy Store’s Gong Show, among other things. Capasso’s comedic style, he says, is based on comics like Richard Pryor, Eddie Murphy, Doug Stanhope, Bill Burr and Dave Chappelle.

“My comedy is very political, sometimes surreal and not for everyone — which I am OK with,” he said. “Definitely for over 18.” His visual art work, he said, follows the same patterns. “I see something or hear something and it hits my head like a seed. I have to do something with it or I go nuts.”

After spending 7 years abroad, Capasso moved back to Ohio. Although he misses London, he considers Yellow Springs a suitable replacement. “YS is the perfect storm of small town and folks who appreciate the arts,” he said.

When asked if he lives in town, he responded, “Sort of,” before elaborating: “I’m a Gypsy,” he said. “I have a YS address, but live full time in an RV.”

The RV, he said, is part of the reason he’s producing the event, which he hopes will function not only as entertainment and cultural enrichment, but as a fundraiser of sorts: “I got an old 1987 Pace Arrow and just went deep in debt getting the engine fixed. I’m trying to dig out of the hole.”

This event is not Capasso’s only contribution to comedy in Yellow Springs; since his arrival last year, he has hosted a comedy night once a month at the Spirited Goat Coffeehouse. Capasso said he hopes to turn this groundwork into something bigger.

“This year is an experiment,” he said. “I have long had a dream of setting up a comedy festival in YS.” After his experiences in the Edinburgh Fringe Festival, he’s come to believe that the United States is severely lacking in similar events for comedians.

“YS seems like the perfect place for a comedy/performing arts/art festival,” he said. “But that is for the future. For now, I’m trying to get through this one.”

Tickets for this weekend’s event are $5 at http://www.lukecapasso.com or $8 at the door.