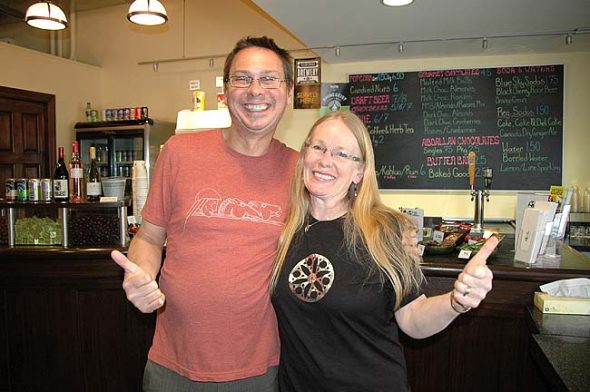 From left: Facilities Manager Brian Housh and owner Jenny Cowperthwaite pose in the lobby of the Little Art Theatre. (Photo by Audrey Hackett)

New programs at the Little Art— Fancy a weekday matinee?

It’s a weekday afternoon, you have a few free hours, you want to see a movie. Wish the Little Art were open? Now it is.

Yellow Springs’ hometown theater recently debuted weekday matinees — 3 p.m. showings Monday through Thursday of the week’s feature film for the matinee price of $7. The first weekday matinee drew one viewer. Attendance doubled on the second day. Executive Director Jenny Cowperthwaite hopes that, as word spreads, daytime film lovers will “vote with their feet,” as she put it in a recent interview.

The idea for 3 p.m. weekday matinees came from a mentor of hers who operates an independent theater in Waterville, Maine, she said. That theater tried the unorthodox show time, and “it took about a year to catch on” — but catch on it did, she said.

Weekday matinees are just one way the Little Art is experimenting with programming this spring. Another new initiative is Music and a Movie, a monthly pairing of live music and a film. Music and a Movie kicked off in March with a performance by local bluegrass band the Corndrinkers and a screening of country music saga “The Winding Stream.” A member of the Corndrinkers proposed the event, which packed the house, and the Little Art decided to carry the idea forward with different music-movie pairings the fourth Thursday of every month. This month, on Thursday, June 23, at 7 p.m., local pop-rock band the Speaking Suns will play, followed by a showing at 8 p.m. of the 2007 comedy-drama “Juno,” about a precocious pregnant teen.

“We’re excited about having music in the theater,” said Operations and Marketing Manager Brian Housh. The Little Art has a stage and a podium, which gives it flexibility for music and other live events, he said. For example, popular Dayton-based drag troupe the Rubi Girls, which has performed at the Little Art in the past, will perform again during Yellow Springs Pride, later this month.

Trying new movie times and diversifying programming are part of the theater’s ongoing effort to build its audience, he and Cowperthwaite said. Movie attendance is down across the country, according to Cowperthwaite, and the Little Art is not immune to that decline. Involved with the theater since she was 15, she remembers when people would show up to the window, push money through to the cashier and ask, “What’s playing?”

Those days are gone, and movie theaters in the Netflix era have to work harder to appeal to audiences who may, as Housh said, “find it easier to watch a movie at home.”

The Little Art’s slogan is “The best place to watch a movie, together,” and that distills what the theater hopes is its appeal: a community gathering place for enjoying movies, music and other programs in the company of friends, neighbors and strangers. Yellow Springs residents represent the majority of the theater’s audience, as well as the vast majority — roughly 80 percent — of the Friends of the Little Art, the theater’s membership program, which augments ticket sales, concessions and rental fees to fund its operations.

“The environment that Jenny’s built up has created an icon in the community,” Housh said. “People are excited to have an event here.”

Dozens of people, from movie producers to movie enthusiasts, contact the Little Art each year about screening films and hosting events at the theater, said Cowperthwaite, who handles most of those overtures. For example, the theater was contacted this spring by someone involved in the upcoming release of the new Grateful Dead documentary, “Going Furthur,” which is being promoted through a cross-country, festival-like tour. One stop? The Little Art in Yellow Springs.

“We do get lucky,” Housh laughed, explaining that a Facebook connection was responsible for the “Going Furthur” screening, upcoming on Tuesday, June 14. “Everyone’s connected to Yellow Springs through one degree of separation on Facebook,” he claimed.

Social media, managed by Housh, has been a key piece of the theater’s marketing outreach. “We get a lot of traction with social media,” Housh said, adding that the immediacy of the medium allows people to decide, spur of the moment, to come to something at the Little Art. “For our size, we’re a marketing machine,” Cowperthwaite laughed.

The theater’s core demographic is 50 to 80, she said — “people who grew up going to the movies.” Younger audiences are harder to attract, not just for the Little Art, but for smaller theaters everywhere, she said. This spring’s new programming aims to draw in a younger crowd. Music and a Movie, with its element of live music, seeks to engage younger (and also older) people, Cowperthwaite said, and the new weekday matinees could appeal to anyone with a flexible daytime schedule — not just retirees, but stay-at-home parents and the increasing number of villagers who work from home. To reach families, the Little Art is offering weekly Family Matinees (Fridays at 1 p.m.) through the summer, beginning this Friday, June 3, with “Shaun the Sheep Movie.” And its long-running Meal and a Movie program, in partnership with the Sunrise Café, targets the local “date night” market.

Beyond weekday matinees, the Little Art is contemplating other shifts in show times, said Cowperthwaite. The theater’s 9 p.m. screening is typically its least popular, and Cowperthwaite would like to conduct online polling to determine moviegoers’ preferred times.

And beyond movies themselves, other uses of the venue, restored to Art Deco elegance in 2013, are becoming increasingly important to the theater. Music and a Movie may become, in certain months, simply music, perhaps with a silent video backdrop, Housh said. The theater collaborates with lots of local nonprofits, he added, citing Community Solutions, the Resilience Network and the 365 Project as groups that have used the theater for special screenings followed by community conversations on local issues.

In everything that the Little Art tries, “our main driver is getting people into the theater,” Cowperthwaite said — “butts in seats,” she clarified, with a laugh. The theater, which became a nonprofit in 2009, relies on its board’s efforts and the financial support of 20 local business sponsors and around 450 Friends of the Little Art memberships to survive and thrive as the silver screen on Xenia Avenue.

For as long as it’s around, the Little Art will be that silver screen — but if it continues on its current course, it may become much more.

“Diversifying is important,” Cowperthwaite said. “Who knows what we’ll be in five years?”