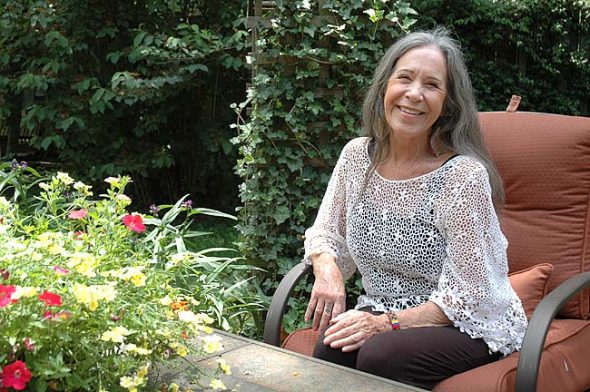 If she could, Kathryn Burkland would do without much of the public attention that has come with retiring this spring after 18 years of teaching Spanish at Yellow Springs High School. She’d prefer to keep the fuss to a minimum as she concludes the latest chapter of her life.

“The long goodbye is just not my style,” she said earlier this week from her Yellow Springs home.

Burkland agreed to a newspaper interview only after the coaxing of her son, who told her that former students would want to know about her retirement. Burkland said she wanted to do the right thing for her students and she wanted to thank the Yellow Springs school district and wider community for the support she has felt since coming here nearly two decades ago.

Burkland grew up in the small village of Somerville, Ohio, near Oxford, where she eventually attended Miami University as an English major, earning bachelors and masters degrees. She studied feminist literary theory and French as a second language. She thought she would teach, but Spanish wasn’t any part of the equation. Miami had a program at the time in which teacher candidates could fulfill their student teaching requirements in Madrid, Spain, or Athens, Greece. Burkland chose Athens, and there she met a dear friend who would prove instrumental in facilitating a consequential later life chapter.

Despite all of her education and classroom preparation, she didn’t go directly into teaching. “After I did my student teaching, I didn’t feel I knew enough to be a teacher,” she said. “I didn’t feel I could say I didn’t know, and I felt like any good teacher should be able to say, ‘I don’t know, I’ll try to find out.’”

She said she pursued a variety of jobs after graduation until 1986, when her friend from Greece offered her the opportunity to come to Cali, Colombia, where he was now the director of a private, bilingual school. He wanted her to teach English there. She went for it, despite the language barrier.

“I didn’t speak Spanish,” Burkland said. “I learned by immersion, and by every meeting being in two languages.”

Her son, Nick, was eight years old at the time. “He spoke Spanish in six months, playing, and I suffered,” she said.

She said they stayed in Cali for five years and then she taught for a school year at an open pit coal mining operation before coming back to the United States for a year. Back in the States, she taught GED classes and English as a second language to political refugees in Columbus. She then returned to Colombia, where she taught for another five years in Medellin. She said she loved Colombia, but being there amid the violence of the drug wars was difficult.

She returned to southwest Ohio in 1998 and was drawn to Yellow Springs. She said her high school sweetheart had attended Antioch College, so she was familiar with the village. She learned that the high school had an opening for a Spanish teacher and she applied. She had the certification to teach English, but needed to become certified in Spanish as well. She did and continues to hold dual certifications.

While she had come home in many ways, Burkland said she still experienced culture shock as she re-entered daily life back in the U.S. She credits Yellow Springs community members for easing her transition. “[Antioch College faculty member] Victor Garcia was hugely influential in helping me adapt,” she said.

“It’s been a great ride,” Burkland said of her time as a teacher in Yellow Springs. Her experience learning Spanish as a nonnative speaker helped inform her instruction.

“There’s a difference between classroom Spanish and conversational Spanish,” she said. “Your purpose needs to be defined when you’re teaching a foreign language.”

Burkland believes that language study has benefits beyond the obvious. “When you can help students see structures, it helps them in countless ways,” she said.

High School Principal Tim Krier said that Burkland’s emphasis was always on her students, “and making sure that students had a voice at the school.” She insisted “we treat them as the young adults they are.”

Krier said that one of the high school’s major goals is “to prepare all of our students to be change agents. And Kathryn Burkland epitomized the change agent philosophy. … She consistently challenged the status quo of what schooling is or should be.” She also modeled what life-long learning looks like, he said, in her travels and engagement with the world.

Perhaps the most lauded achievement of Burkland’s Yellow Springs High School career was the implementation of the annual Spanish Night, where students shared stories, songs, dances and food with the community.

“Spanish Night started in Colombia as Poetry in Motion English Night,” she said “It was a big deal there.” Her goal, she said, was to get “as many students as possible to celebrate language and culture and participate.” She estimated that 90 percent of her Spanish students “participated in some way or the other. That gives me a lot of joy.”

Now she’s contemplating what comes next. The decision to retire didn’t come lightly, she said. “Even though I’m sure it’s the right decision, doesn’t mean it’s an easy one.”

She said she doesn’t have plans. “I need to gather my thoughts and enjoy the summer first,” she said. “I’ve never had time on my hands and frankly I’m looking forward to it. Life has always come to me, and I feel sure I’ll have opportunities to engage.” More travel is certainly on the horizon. “This year I went to Colombia and Cuba. I took videos and letters from my kids to Havana. It reminded me what a great big world we have.”

In reflecting on her career as a teacher, Burkland noted that she was recently re-reading one of her “mentors,” Henry Girouz, who wrote that “our work (as educators) is to make hope meaningful and despair unpersuasive. It gave me chills when I read it, and it gave me chills now as I said it. If there was anything I tried to do, that was it.”