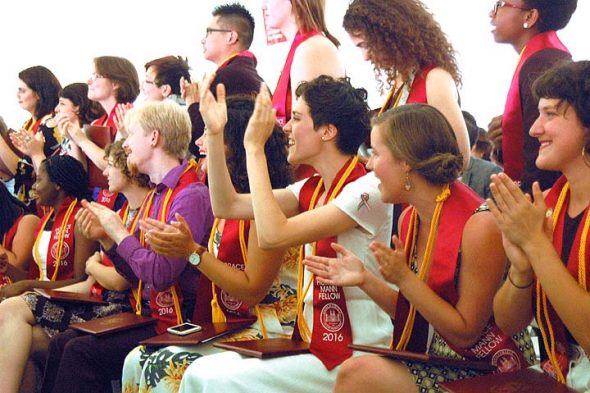 Three weeks ago, the class of 2016 cheered each other on during commencement exercises, the second graduation ceremony of the reopened Antioch. The college received word of its accreditation from the Higher learning Commission on Monday, July 11. (Photo by Matt Minde)

Antioch College President Tom Manley got the word around 1 p.m. this past Monday. An email showed up in his inbox from the Higher Learning Commission, or HLC. It contained the biggest of big news.

After an arduous, five-year process, Antioch College had received accreditation.

For Manley and other senior administrators at the college, a “touchdown dance” commenced, he said on Tuesday.

The news was not entirely unexpected, according to Manley and Provost Lori Collins-Hall, formerly vice president of academic affairs. In June 2014, after three years of required steps including an extended “self-study,” the HLC granted the college candidacy for accreditation on a two-year “fast track,” rather than the standard four years. Antioch had pressed for the shorter timeline, and HLC had agreed to grant the college the accelerated track. A site visit by an HLC team last November seemed to be a success, college leaders said at the time, and subsequent communications with HLC officials seemed to suggest that accreditation was on a good course.

“We had the sense that we’d done everything we could,” Collins-Hall said. “But it’s never done until it’s done,” she added.

This is the “best news we could have gotten,” said Manley. It’s not just that the college was granted accreditation on a two-year track, he said. Accreditation from the HLC is not a onetime event, but rather a status that must be maintained in an ongoing way, with defined time frames for renewal. Going forward, the HLC has granted Antioch a “standard” or 10-year accreditation track, Manley said, meaning that the college is slated to reapply for accreditation in 10 years, with a check-in during 2019–20.

“This is the best possible result,” Manley said. “Not only did we get over the finish line, but we did it in a powerful way.”

“It can’t be done for the class of 2015,” Manley said. But he and Collins-Hall downplayed concerns that the earlier class — often referred to as “the pioneers” — will face skepticism from prospective employers or graduate schools. “No one will really care about [the unaccredited degrees] any longer” in light of the positive accreditation decision, Manley said.

Antioch College as a whole will benefit in many ways, some immediate, some with a longer timeline.

Fundraising is one key way, said college leaders. With its new accredited status, Antioch will be able to seek funding from a full array of foundations, as well as funding from federal government programs, such as Title IV financial aid, only available to accredited institutions. And though the college has benefited hugely from alumni spirit and support, said Manley, many alumni have told the college they’re “waiting for accreditation” before they commit to financial support.

Student recruitment efforts will also get a boost, said Collins-Hall. “Students and their parents are in tune to issues of standards and accountability,” she explained. Not only will the college be able to offer students a degree from an accredited institution, but accreditation “clearly demonstrates the college’s high standard of rigor,” which remains on par with what Antioch has always been, she said. The college will also be able to recruit international students, a door that was closed when the college lacked accreditation.

Many of these benefits will require time and strategy to communicate to the college’s constituencies, as well as time and hard work to come to fruition.

“These are multi-year, ongoing challenges — but now we have a fantastic story to tell,” Manley said.

Asked if the newly accredited Antioch was the same or different from the “old” Antioch that existed prior to the college’s 2008 closing, Manley emphasized both change and continuity.

“It moves on, but it’s the same river,” he said. Progressive values and academic rigor remain areas of continuity, as does a commitment to experimentation and meaningful real-world experiences for students. But Antioch’s closing gave it a rare opportunity to reinvent the college, and “help reimagine what college can be,” he said.

Manley noted that HLC accreditation required that Antioch enter into the process as a “novice institution,” offering proof of its present-day excellence “not drawn from the history of the institution.” Yet at the same time, HLC President Barbara Gellman-Danley acknowledged the college’s history in her recent determination letter.

“Let me commend you for the passion of your alumni, the Yellow Springs community, board and institutional leadership, students and other stakehoders. Your efforts clearly reflect Horace Mann’s greatest quote, and you have indeed won ‘some victory’ today,” she wrote.

End of a long road

Accreditation is the end of a long road that began in 2009, when the college reopened as an independent institution. College leaders began working toward accreditation immediately upon that reopening, building toward an initial submission, in 2011, of the first round of materials to the HLC.

That organization is the regional accrediting body for institutions of higher education in the central U.S.; accreditation is considered essential for legitimizing a college or university’s programs. Criteria for accreditation include an institution’s finances, structure, board and governance, curriculum and curriculum delivery, student success, shared governance and, on top of all that, proof that the institution is “engaging in continuous improvement,” said Collins-Hall.

Antioch’s first submission of initial materials was rejected, and the college reapplied in 2012. At that point, the process seemed to get on track. The HLC approved the next step, a 14-month self-study that began in 2012. That led to a site visit in November 2013, followed by the HLC’s momentous decision, in June 2014, to approve the college as fast-track candidate for -accreditation. More self-study and another site visit ensued.

And so it is, current college leaders said.

Associate Director of Communications Kateri Kosta said on Tuesday that the college community would be informed by phone and email later that day. A campus celebration (not geared to the public) is planned for next Tuesday, July 19. A banner will be hung on the horseshoe side of Main Building, Kosta said.

It will read, “New and better ways of living and learning since 1850.”