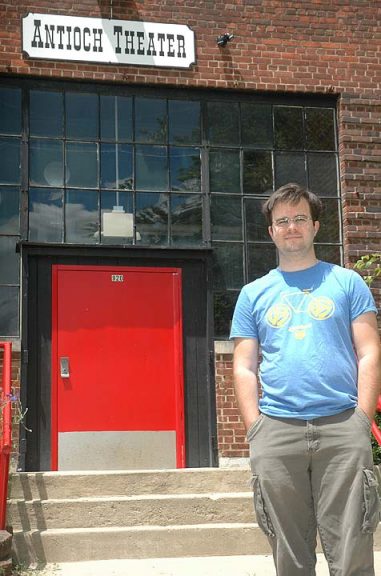 Pianist Sam Reich stands in front of the Antioch College’s Foundry ­Theater, which houses the college’s Steinway concert grand piano. Reich hopes to fund the restoration of the piano to peak form through the proceeds of the Yellow Springs Piano Fest, a series of performances he envisons over the next year. Reich will kick off the series with a performance of J.S. Bach’s Goldberg Variations, Sunday, July 24, at 7 p.m. at the Herndon Gallery. (Photo by Carol Simmons)

Goal of concerts is to restore Antioch College grand piano

Locally based pianist Sam Reich had an idea, and now he’s seeing where it leads.

“It’s an amazing instrument,” he said of the 9-foot Steinway that suffered water damage during the three years Antioch College was closed. “It’s the finest instrument in Yellow Springs.”

And while the piano is playable, it is not at top form, befitting an $80,000-plus instrument, he said.

He said a piano technician who’s examined the Steinway says the piano needs new bass strings and its action needs to be replaced. The bill could be between $5,000 and $10,000, but an estimate for the work has not yet been set. 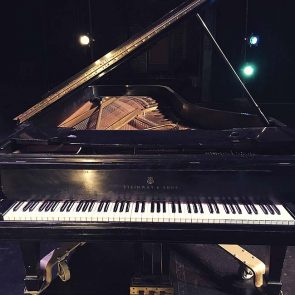 “The things that need to be fixed are expensive,” Reich said.“A Steinway piano’s action is hand-made. They’re kind of works of art in terms of craftsmanship. They’re made with lots of care. It’s a better idea to fix one than replacing it with a new instrument, but it’s not an easy thing.”

And while the need is there, Antioch College leaders, seven years after re-opening have enough on their minds with raising funds and attracting new students, Reich believes, so that repairing the piano might not be high on the list of priorities.

So Reich hopes the community might help raise the required funds.

Reich, who has a master’s in piano performance from the Eastman School of Music, is well known in town for hosting recitals in which he gives the proceeds to local organizations and nonprofits. The YS Senior Center and the Interfaith Hospitality Network have been past recipients.

In thinking about raising money for the Foundry piano, the idea for a Yellow Springs Piano Fest was born. He tested the waters in May with a three-day series of recitals featuring professional classical pianists  — friends of his who agreed to come to town to play. Reich said he wanted to see if there was interest among villagers in attending such concerts before he started the fundraising effort. The turnout was good enough to continue, he said.

The next concert in what Reich envisions as a year-long series of performances will be Sunday, July 24, at 7 p.m, at the Herndon Gallery on the Antioch campus. The first half of the program will feature cellist (and Yellow Springs native) Polly Case-Lohrer and pianist Karen Gardner playing duo selections by Vivaldi, Schumann and Mendelssohn, and the second half of the program will feature Reich performing Bach’s Goldberg Variations. Admission is free, but donations are encouraged, as it is a fundraiser, with $10 being a suggested amount.

The concert will be a homecoming for Case-Lohrer, who was born in Yellow Springs and studied at the Cleveland Institute of Music and Indiana University. She now lives in Germany, where she teaches cello and performs with chamber music ensembles.

Gardner, who lives in town, studied piano at Indiana University and has taught piano privately and served as pianist at several churches.

In addition to preparing for the concert, Reich is working out details about where the money that’s raised will go and how it will be managed.

“I don’t want people writing checks to me,” he said.

Other Piano Fest performances will be in December and conclude next May. Reich said that another goal of the fest to create community between the village and Antioch College.

“A lot of people have been talking about trying to create a new performance space (in town). But we already have the assets that we need,” he said. “I think the Foundry Theater is a great space, and the piano is the best in Yellow Springs. So this (rehabilitating the Steinway) is trying to find a solution.”