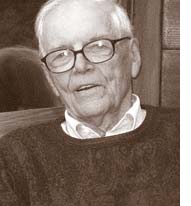 John Richard Cary passed away June 29, 2016, after a full and vibrant life. He was a loving partner and father, Quaker and conscientious objector, professor of German literature, exuberant accordion and piano player, cheery optimist, and lover of peanut butter and mayonnaise sandwiches. He was passionate about grammar and linguistics, as well as the value of civility and of all persons. He enjoyed speaking with everyone about any and all topics, ranging from politics and sports to poetry and literature. Reading the NY Times from cover to cover, he could be counted on to provide clippings of interesting articles and cartoons.

John was born in Baltimore on Oct. 28, 1923. His parents were Mary Goodhue Cary and Richard Lucius Cary. Both his parents were Friends; his mother grew up in Germantown before moving to Baltimore. His father was an engineer and later an editorial writer for the Baltimore Sun.

John moved to Berlin, Germany in 1930 with his family, including younger sister Ellen, when his father was asked by the American Friends Service Committee (AFSC) and German Quakers to act as Secretary of the International Quaker Bureau which sought to assist German Jews.

John attended the local public school in Berlin where he made close friends and where the German love of nature and of music was instilled in him. Even as a very young person, John was conscious of his privileged status and of being an outsider. He remembers being aware of his parents’ Quaker vision of love and reconciliation in a country that was being torn apart by conflict and strife.

When Hitler became chancellor in March of 1933, John’s school days changed forever. His entire class was instructed to begin the day with “Heil Hitler.” John continued to walk to school between his chums Hans-Heiner Müller, whose father was a Nazi, and another boy nicknamed Bärchen (or, “Little Bear”) Cohen, the son of the local rabbi. As John told it, one day Bärchen was gone, and he and his parents hoped that he landed in a faraway place safe from Hitler.

During the summer of 1933. John left for England where he attended the Dragon School as a day student, and began grappling, belatedly, with the peculiarities of English spelling. John lived with a Quaker family, who provided loving support to him when news came of the untimely death of his father, who had suffered a fatal stroke in Berlin. His mother Mary Cary carried on Richard’s work in Berlin until a replacement could arrive.

Returning to Baltimore in 1935, he attended Baltimore Friends School. He graduated from the George School in 1941 and entered Haverford College, just in time for Pearl Harbor and the draft. John’s Quaker beliefs and ideals led him to seek successfully conscientious objector (CO) status. John served with the Civilian Public Service in a logging camp and later joined a CO unit acting as a subject in tests of hearing protection equipment considered for use by soldiers in the field.

In 1946, John returned to Haverford, finished his degree in German and then went on to take a doctorate at Johns Hopkins. Among his many activities, he excelled on the cricket and soccer field. In 1951, just before finishing the degree, he met and married Catharine Brinton. Catharine’s parents, Anna and Howard Brinton, were prominent Quaker leaders and intellectuals.

John and his wife Catharine returned to Germany in 1952. John wanted to do something to help the Germans recover from their addiction to fascism. He was employed by the AFSC to run a student center at the University of Munich where people of different viewpoints and nationalities would meet and discuss the issues of the day in a spirit of reconciliation. At this time, his wife Catharine worked with displaced persons on their way out of Europe.

In 1954 John and Catharine returned to the United States with a baby girl. He received a teaching post at Haverford, where he remained for 37 years as a tenured professor in the German department. Early on, he taught introductory German (six days a week at eight o’clock in the morning) often offering folksongs to help the grammar go down. Over the years, he also taught many advanced German literature classes, with such authors as Goethe and Thomas Mann frequently featured.

In 1997, John and Cathy travelled to Berlin to attend the 50th anniversary reunion of British and Americans who worked in post-war German relief under Quaker auspices. Funded by the German government, it was an opportunity for Germans to express their appreciation to the Quakers who helped with post-war relief work. John recalled that one speaker representing the German government wanted the attendees to know that what had unforgettably endeared the Quaker workers to the Germans was “that you treated us like fellow human beings.”

John loved family gatherings of all kinds. He also loved music; he shared a passion with his wife Cathy for the opera and in particular for work of Richard Wagner. He also played music and would often entertain family and friends with his singing, accordion and piano playing. Into his 90s, John loved to harmonize with others on familiar tunes.

John’s Quaker faith was an important part of his world view and he deeply valued being part of different Quaker communities over the years. Besides his work with the AFSC, he served on the board of Pendle Hill, a Quaker study and education center in Wallingford Pa., and in his later years, found a spiritual home at the Lansdowne, Pa. Quaker meeting.

A celebration of John and Catharine Cary’s life took place at Rockford Chapel on the Antioch College campus on July 3, 2016.