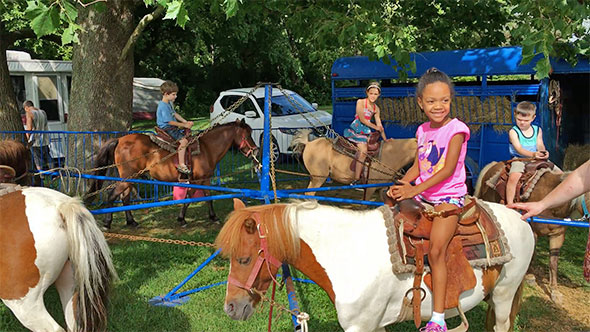 “Deep fried peanut butter and jelly sandwich. Deep fried PB & J!” This was my husband’s mantra last Saturday as the family made its way to Fairborn’s annual Sweet Corn Festival. He had visions of sinking his teeth into this buttered and battered confection while sitting on the stands at the community park taking in the festival’s sights and sounds. I was more intent on the traditional festival faire: barbecue chicken, corn on the cob, and corn fritters! After parking at the Fairborn High School, we crossed the sports fields, and the Community Park’s playground to make our way to the main pavilion. There, we stood in line for chicken dinners prepared by the Fairborn Lions Club. The Lions Club is one of the festival’s main sponsors along with the Fairborn Art Association.

The barbecue chicken dinner is among my favorite offers at the Fairborn Festival. The Lions Club meal is so wonderfully similar to the barbecue that the Nichols Fire Department fires up for the annual Old Home Day festival in my hometown. To me, the meal is pure sugar coated sentiment. The main pavilion of both events stands alongside a gazebo where performers offer live music and dancing. At the gazebo in my hometown, you can hear John Phillip Sousa played by the Kirby Band, one of the oldest continuously performing bands in the nation. Several yards away at the Fairborn park’s gazebo, we could hear the duo Common Thread playing as we ate our meal. Nodding along to their country vibe, we shared a two chicken dinners, a cup of fresh cut watermelon, and extra batches of crunchy corn fritters. 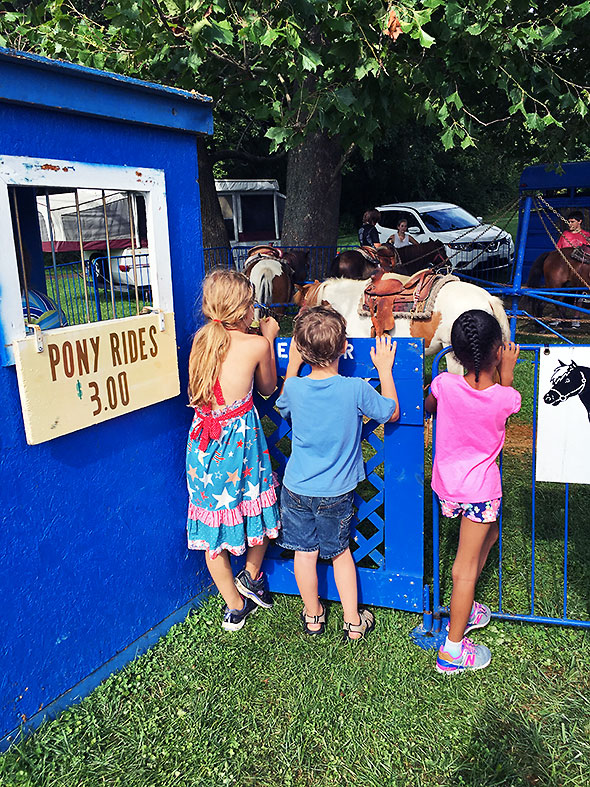 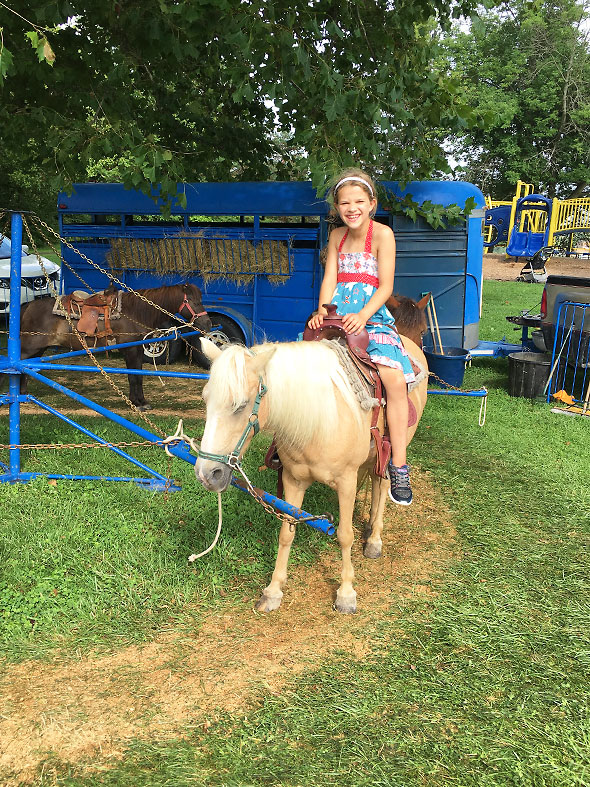 My husband Jeremy warned us when we left for the festival that our stay might be cut short by storm. We arrived incredulous. The day was beautiful if a bit hot. We hit the food first to be sure we fit in that part. There was much on our docket to indulge as a family: music at the gazebo, pony rides at the playground, bouncy houses on the main lawn. I also like to turn about the tents to the north were venders set up with frontier inspired handcrafted trinkets. The children followed happily oohing and aahing over archery bows and toy rifles. My husband tried to keep us moving forward with the promise of pony rides and funnel cake, but we were still walking off lunch and intrigued by leather, wood, and gut string goods. Rather quickly though our water gave out so he convinced us to return to the food stands. Let’s listen to the music, he lobbied, so we separated ourselves from our shopping and doubled back. I had just settled onto one of the bleachers positioned around the music stand when Jeremy asked for permission to get our daughter a snow cone. I said, yes, looking after their immediate retreat with an crooked brow. While they were gone, I texted the playlist, “Cups!” “Taylor Swift!” “Landslide!” and then less subtly “Hey. Where are you?” then “They are saying last song.” and finally “You make me Crazy.”

The rest of the family returned shortly after I typed “Crazy” but the damage was done. Jeremy explained that they got the snow cone for our daughter and aborted an attempt to buy a funnel cake for our son when the child started doing the potty dance. They made for the portapotties across the park where they all took a turn and then, since they were in the neighborhood, Jeremy indulged the kids for a few runs though the bouncy houses. What he failed to mention that was he was also searching earnestly for the vendor who sold his deep fried PB & J. By the time they had returned, the snow cone was long gone. No funnel cake. No peace offering.

This moment was where the storm broke. No, not the actual downpour but me. I was spitting mad. 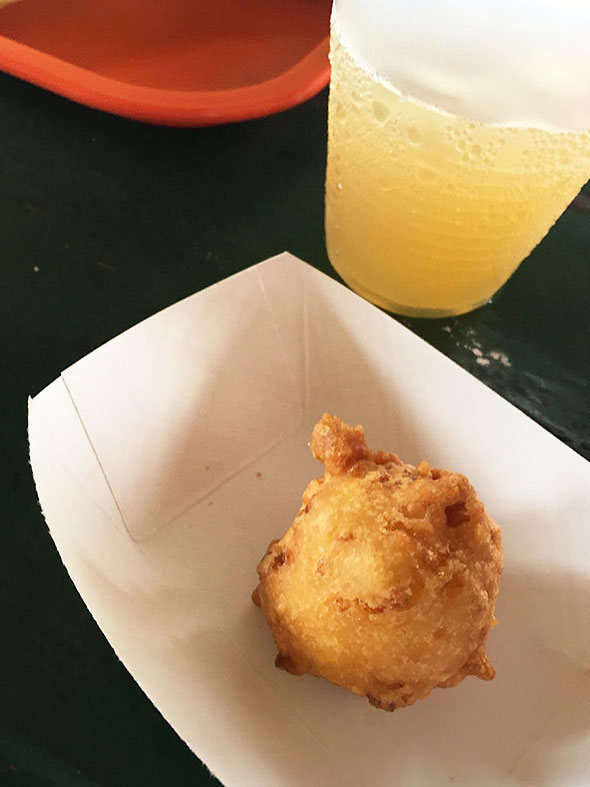 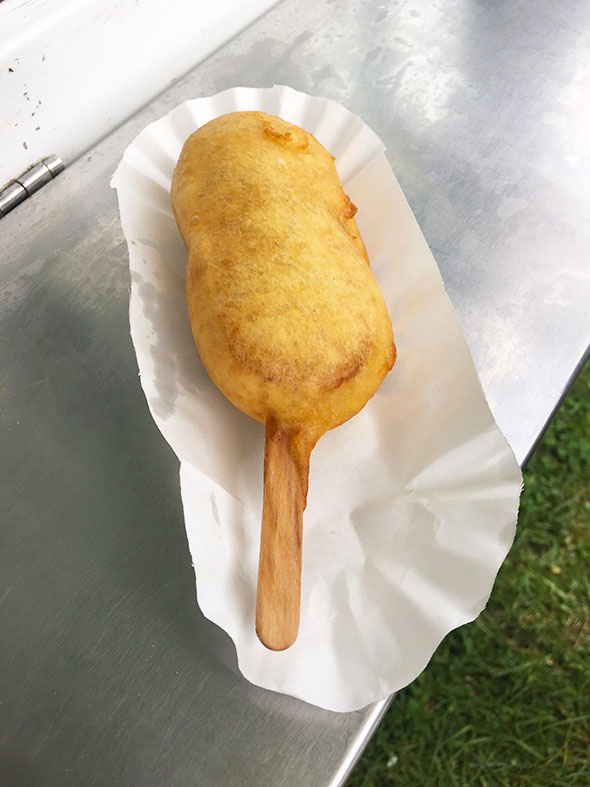 Feeling like I’d been ditched, I returned the favor. “I have work to do!” I announced and huffed off to the high school and the parked car. The family followed in my agitated wake. They were a little bewildered. They hadn’t been gone long…just out of proportion from their original mission. The intense heat, the waiting made it seem longer. Near the playground, we negotiated a peace plan. I’d wind down at the Fairborn Library and the family would meet up again in an hour when the pony rides reopened at 4pm.

While I chilled at the library, Jeremy resumed his quest for deep fry. We kept in touch particularly after a bank of dark clouds rolled in and poured down rain. Jeremy reported in that they found adequate cover. No luck on yet with finding his food vendor but the kids found a copy of Alexander Hamilton‘s autobiography. The weather broke promptly at 4pm. Rather than ruin the day, the storm served it…managing to bring down my temper and the day’s temperature simultaneously.

Shortly after 4pm, the family met me just west of the parking lot. The kids showed me the bow and arrow that they had convinced their father was a needed purchase while they were confined under the vendor’s tent. The bow was my daughter’s prize but they promised to take me back to participate in the negotiations for our son’s. Making our way back to the tent that sheltered them during the storm, we stopped at the pony rides as planned. This ride is another sentimental favorite from Old Home Day. I have only seem them there at Kirby Park and here in Fairborn but they seem to me the very stuff of childhood. The kids picked out their pony— the boy taking up the one just behind his big sister—and ponies started their riders off at a easy saunter. As a team, they managed to circle twice around when suddenly they slowed as a unit. I could see my son’s eyes bop as he looked down at the back hooves of his sister’s pony and I noticed its long blond tail curled high and gave out a hoot as my son began to laugh and laugh. The ride came to a stand still. A trainers grabbed a bucket and scoop. He clear out the fresh drop of horse manure while my son peppered him with questions. Met with more excitement on that ride than I ever managed, the kids were quite pleased to be at the center of attention. 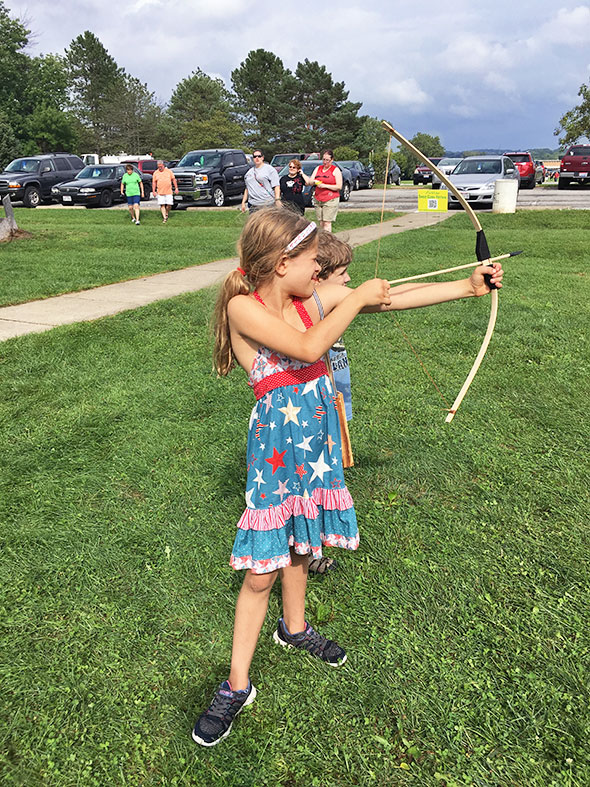 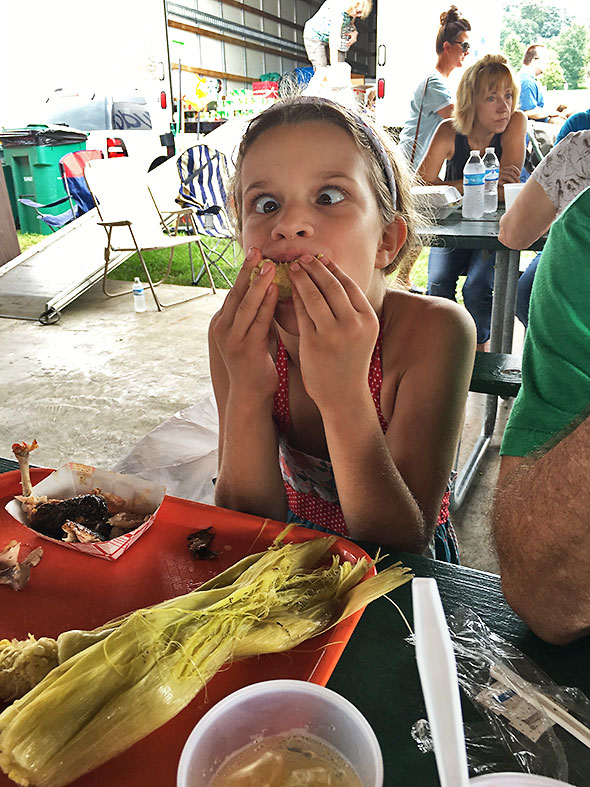 Back at the tent of the bow and arrow kits, we made three additional investments: a mock spear with a head fashioned of soft red leather, a matching tomahawk whose blade was made of purple-dyed leather, and a large bow whose arrows had white-feather fletching.

Feeling the end of our run near, we walked Jeremy round the vendor tents one more time to find the snack of his desire. We spotted kettle corn, fresh baked pie, deep fried pickles, funnel cakes, and finally a stand that boasted deep fried oreos and snickers. No PB & J but my husband was determined to try something truly decadent. “I’ll have a Deep Fried Twinkie” he decided, and the rest of us groaned. He brandished his sugar bomb on a stick as we walked away. We could catch the smell of hot marshmallow as he bit it. “Oh, it’s awful” he conceded. “Who wants a bite?” We smiled at him but shook our heads. Instead, we walked back to the Lions Club stand. I had one dollar left…enough for one last order of corn fritters. Now we could turn toward home: the kids armed for archery, bows draped as proud warriors across their chests, quivers ready filled with trim arrows; their parents loaded with deep fried sugar bombs.