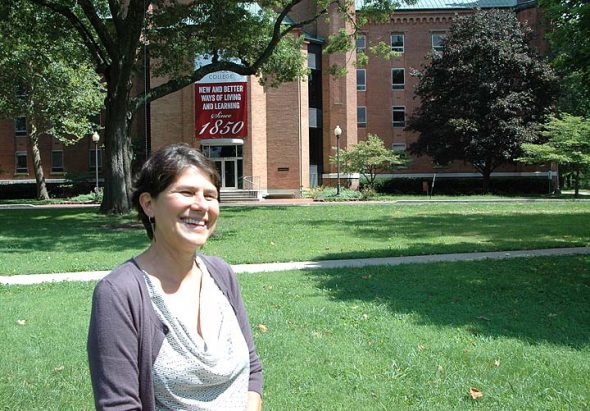 This summer’s accreditation victory could boost Antioch College’s fundraising efforts, allowing the college to tap new sources of support. And now the college has a seasoned fundraiser to carry out that work.

In August, Antioch hired Susanne Hashim as vice president for advancement, the college’s top fundraising job. Hashim brings over 20 years of fundraising experience to the post, including positions at Pacific Northwest College of Art, Pitzer College and Planned Parenthood in Portland, Ore. The new hire is also a familiar face on campus: Hashim is the wife of Antioch President Tom Manley, who started on the job in March.

Hashim was chosen after a two-month search process that drew 30 applicants, according to Andi Adkins, vice president for finance and operations, who chaired the search committee. Both Hashim and the five-member search committee were sensitive to her role as the president’s spouse, Adkins said last week. In fact, the committee initially set aside Hashim’s application in hopes of finding another candidate of equal or greater qualifications. But after narrowing the candidates under consideration to just six, it became clear that Hashim was “shoulders above the field.”

“At that point, we approached her to see if she was still interested, and she was,” Adkins said.

Hashim stood apart from other candidates because of her “deep experience” and strong focus on fundraising for higher education, according to search committee member Maureen Lynch, who also chairs the Antioch board committee on development.

“We’re very lucky to have her,” Lynch said.

Hashim fills the vacancy left by Jennifer Jolls, who previously oversaw both the advancement and communications offices at the college. Jolls, a senior administrator who helped rebuild the college, left Antioch in May to join the University of Dayton Law School as director of strategic initiatives.

Hashim most recently served as vice president for development and external affairs at Planned Parenthood in Portland. Prior to that, she held two major fundraising roles at Pacific Northwest College of Art, where Manley was previously president. And she occupied several senior fundraising roles at Pitzer College in California, where Manley also served as an administrator and where the couple met.

“I have a pretty big background in this area,” Hashim said on Monday. She acknowledged that some might “look askance” at the hiring of the president’s wife for a senior leadership position, but she hopes her work at Antioch comes to speak for itself.

To avoid potential conflicts of interest, the college has put several safeguards in place, according to Adkins. Hashim will be reporting to Lynch, as board development committee chair, rather than Manley, an arrangement the board approved prior to Hashim’s hiring. In addition, her salary was determined by the board’s compensation committee. And Antioch’s chief human relations officer, Joanne Lakomski, has been designated to handle any conflict of interest concerns that might arise.

Hashim said she and Manley have “worked together successfully” in the past, and expect to do so again at Antioch.
Hashim began on the job Aug. 15. She anticipates taking a “sequential approach” to building the college’s fundraising program, working in a methodical way to develop key components, such as robust foundation and corporate support and increased community giving within the region. Hashim believes that Antioch has done “amazing things” with fundraising since reopening in 2009, especially given the limitations of being a fledgling, unaccredited organization.

“At the same time, there’s much more we can do,” she said.

Alumni have formed a backbone of the college’s support to date, and Hashim believes they will continue to play a pivotal role. “Alumni have always been and will be the guardians of the spirit, the keepers of the flame,” she said. And while some at the college worry about “donor fatigue” among alumni who have already given generously, Hashim believes that many Antiochians are actually waiting for “more certainty” to invest fully in the college’s future.

Toward that end, building confidence among alumni and others is essential, she said. Accreditation is a step in that direction, but it is her job, together with the college’s 10-person advancement team, to demonstrate that Antioch has “big plans” and the capacity to carry through, Hashim explained.

Laying the groundwork for those plans is the president’s new Framework for Antioch College Transition, or FACT, a “design-build” process for identifying and implementing new initiatives around key college resources such as Glen Helen and WYSO. Hashim anticipates fundraising to support the FACT process itself, which involves hiring consultants and using staff and faculty time in new ways, as well as the programs and initiatives that emerge from it.

“I want to be sure that we are finding and attracting support needed to drive Antioch’s success into the immediate and long-term future,” she said.

Asked about the climate of higher education fundraising, Hashim was upbeat about the commitment of donors who continue to see value in a college education, and a liberal arts education in particular, despite widespread criticisms around tuition costs and other factors.

“The support is still there,” she said.

One component of that criticism, that college should be more directly useful to students’ future lives, actually plays to Antioch’s strengths, Hashim pointed out. “Colleges have an obligation to give students the tools to be able to navigate this challenging world we live in,” and Antioch is perfectly positioned to do just that, she said. “Antioch’s co-op program and experiential education is a tried and tested way of giving students those tools.”

In leading the college’s fundraising efforts, Hashim steps into a role that’s seen considerable turnover in recent years. Such turnover is common in the fundraising field, according to Lynch, the board’s development committee chair.

And that, Hashim said, is one benefit she brings.

“I’m not going anywhere; I’m not using this as a stepping stone. I have a strong commitment to the college’s success,” she said.