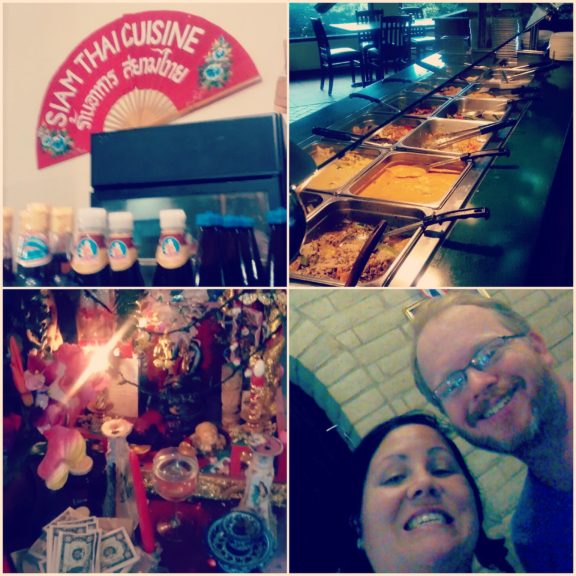 BLOG — Every Day a Thai Buffet

When I go on vacation, I feel compelled to enjoy myself one-hundred percent of the time. A vacation is a delicacy, to be savored and remembered fondly after, content in the knowledge that no drip or crumb of this treat has gone to waste. This is why, when I went on vacation last month, I tried for two days to ignore the pain that was steadily building in my mouth.

It started during the all-night drive from Yellow Springs to Panama City, Fla. I started feeling the pain in the upper right side of my mouth after we’d been driving for six or seven hours. I noted the pain because I was trying to rest up before taking my turn behind the wheel. I was convinced that there was just a leftover kernel from the cheese popcorn I’d picked up at a Pilot truck stop in Tennessee lodged in my teeth. I dug around with a toothpick for a while, but couldn’t manage to get rid of the ache there, so I wrapped myself in a sweater and settled down into my seat to rest, telling myself that the kernel would work itself out and the pain would go away on its own.

It didn’t, though, and this annoyed me as I sat in the kitchen of my parents’ Florida home the next morning, crunching gingerly on an adorable cereal called “Tiny Toast.” I spent the rest of that day at the beach with my family. All the while, the pain was building, a steady crescendo that was starting to affect my mood. By the next afternoon, I was in tears, Googling emergency weekend dentists, of which there are apparently none in the Florida panhandle. I ended up in the E.R., where I was told I had an infection in my tooth and a budding abscess in my gums. The doctor prescribed an antibiotic to nix the infection and Vicodin to help with the pain.

I was relieved to have the power of narcotics on my side. My sister, my husband Anthony and I had decided to take a trip to the T.T. Wentworth Jr. Florida State Museum in downtown Pensacola. The museum is home to a number of exhibits which detail early Floridian history, but the real crown jewel in the place is the room dedicated to the quirkier artifacts of the collection of the late T.T. Wentworth, who was a serial and not-too-particular collector of things, once declaring that he “never threw nothin’ away.” His collection is comprised of over 150,000 artifacts, including the historical items that populate the more academic portions of the museum, but also things like the locally-famous “Petrified Cat,” which was found inside the walls of a Pensacola building in the 1940s. Clearly, this was an opportunity not to be wasted on a bum tooth. I used the last dregs of my orange Hi-C from McDonald’s to swallow one of my pills outside standing on the sidewalk, and then walked in.

The T.T. Wentworth Room exhibit is a wonderland of weird. Items are packed into cabinets of all sizes. Some are intricate and beautiful, like the seafaring scene depicted inside a lightbulb; some are curious, like the combination pistol-knife-brass-knuckles, in the style of a Swiss Army knife; some are bizarre, like the ghastly likeness of the Count of Monte Cristo, which the artist who donated it to the collection hilariously described as having been done from memory, using “no picture.” I love these kinds of museums, because they confirm my own personal life choices re: hoarding small, weird things. It’s cool, I don’t have too much stuff, I’m just a collector; one day I might have my own museum of miniature food items and Star Trek paraphernalia, you never know.

After the museum visit, I insisted that we go out to this Thai buffet restaurant that we’d passed earlier. I had never even heard of a Thai buffet, and this seemed like the chance of a lifetime. I was euphoric as I ate, exclaiming over each bite of pad Thai and green curry and lard na, relishing the fact that the miracle drug was doing its work: I could chew without pain. This day was my heaven. I was having such a good time I felt close to tears.

Later, after a post-lunch nap for myself and the rest of my party, the pain started to return.

“At least lunch was delicious,” I told my husband, Anthony, as he brought me a Tylenol. “That was maybe the best Thai food I’ve ever had.”

Anthony looked at me like I’d grown a weird Count of Monte Cristo statue from my forehead. “What are you talking about? That food was awful.”

He shook his head. “You were on drugs. It was not good food.”

My sister didn’t go as far as to proclaim that it was inedible, but she did say the food was nothing special. I simply couldn’t believe it.

Was it possible that I had just enjoyed a day that was fantasy? Was my perception of events really so altered? Was literally everything I had ever known a lie?

I was annoyed for a few days about the disparity between my perception of the day’s events in Pensacola and those of my husband and sister. We had, at least, all enjoyed the museum, but I still can’t accept that I had really been so altered that day that I could literally turn bad food into good food just by putting it in my mouth — though that is perhaps the best superpower I can imagine.

In the end, reality is subjective anyway, at least to a point; our perception and our memory is all that defines a lunch at a Thai restaurant. If I was being influenced by pharmaceuticals, it can also be argued that my sister didn’t enjoy the food much because she was experiencing some tooth pain of her own, and that my husband, darling and lovable man that he is, can be rather particular about his food anyway, especially after a long day of walking around with a couple of sisters who bantered and bickered and teased for hours. Perhaps I’m not the only one whose perception was altered that day, by tooth pain, by mood or by fussy tendencies.

I had felt, up until that day, that so much of my vacation had been wasted on pain. Now, in my memory, I mark that day at the museum and the buffet as representative of the whole trip. I also mark it as a personal goal for my life: every day is a trip to the Thai buffet, which can be as delicious as I want it to be. Figuratively speaking, that is, though I wouldn’t sniff at literally going to a buffet every day. Anyway, as far as my memory is concerned, it was a great vacation.

I’m going back to Florida to visit this Christmas. I hope I get the chance to make it back to that Thai buffet. I hope it’s just as amazing as I remember it to be.