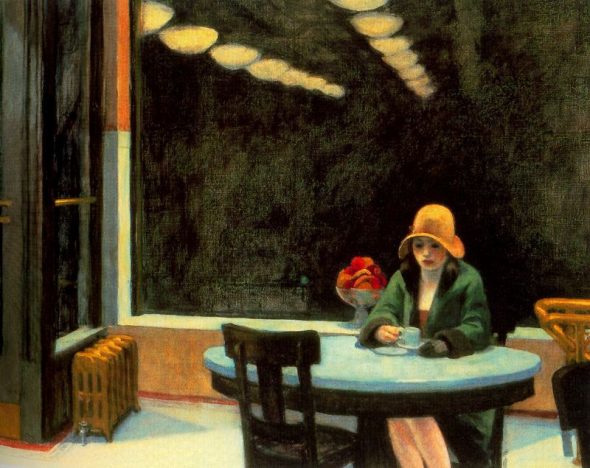 It’s dusk. I’m pedaling down the road. I pass a lit window. A woman is there, reading, or pausing in the midst of reading. I glimpse her face. It has a private look, thoughtful and a little sad. It’s not a look I’m meant to see, yet I do. I will think about that look for days. Or rather, I will feel that look, feel it at times on my own face.

I don’t make a habit of riding around town at dusk, but maybe I should! The rewards are subtle. I’m not looking for anything exotic from my fellow villagers, just plain life. A woman at a sink. A man in a chair, inspecting his glasses. TV is the killer, though. Put a TV in a room and the intimacy vanishes. I would almost say the humanity vanishes, but that’s probably overstating things.

These ordinary scenes fascinate me. They always have. When I was a child — an only child in the backseat with no sibling to jostle — I loved traveling in the car at night, looking past the mailbox shapes into the lit kitchens and living rooms. I was amazed that other people had lives just as I had a life. The lesson came clearer in the dark somehow, clearer because of the dark. These people were strangers. My friends and neighbors had lives, sure. But strangers, too? Strangers across the whole dark continent, the whole dark world? The thought of all those lives made me unutterably happy, and sad.

Years later, I tried to write about this in a college application essay. I failed. At least, I didn’t get accepted at the colleges I sent the essay to! How to say at 17 years old why a woman in a brown hat seen briefly on a bus was a figure of crucial influence? I can’t really say it now, at 42. But I have a distinct memory of the woman’s face. It was the first time I noticed that a face could be a mask, and at the same time could never be mask enough to prevent certain feelings from leaking through.

That knowledge gave me a key to other people, but also to myself.

Sometimes, when we were traveling in the car at night, my father or mother switched on the overhead light in order to read. Then the car became its own lit room, visible to others on the road. A person might glimpse us, three strangers. Three lives. I had the sensation of seeing myself as an observer might — a quick face flaring in the dark. The reversal was unsettling, exhilarating. To recognize oneself as a stranger to a stranger is to embrace a deep form of human equivalency, a primal kinship. Why, they’re people, and I’m a person, too. That’s the starting point of morals and ethics. Every self is a center, and no self is the center.

Perhaps my bike tire squeaked the other night. Something caused the woman to look up, to look out. And to see me, or see the fact of me. A woman on a bike at dusk. Maybe she was struck by the expression on my face. Maybe she feels it sometimes on her own.