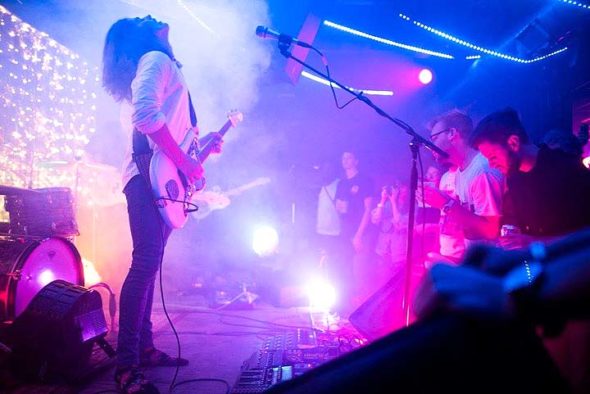 Memphis band Spaceface played in the fog of Dayton club Canal Public House as part of at last year’s Dayton Music, Art and Film Festival. Yellow Springs natives Connor Stratton and Nancy Jane Epling have been in charge of organizing the festival for the past two years. The festival includes 23 bands, numerous artists and film screenings. (Submitted photo)

For the past six months, two Yellow Springs natives have been busy booking bands, soliciting artists and making oversized props. This is the second year that Connor Stratton and Nancy Jane Epling, who now live in Athens, Ohio, have organized the Dayton Music, Art and Film Festival, or DMAFF, and it’s been a nonstop but invigorating hustle. Their gig as DMAFF organizers follows a considerable track record of organizing other gallery showings and concerts, and draws on skills they began developing as high school seniors at YSHS when they staged a benefit concert for their senior project.

On Saturday, Sept. 17, more than 20 bands will perform across four Dayton venues, and attendees will have the opportunity to check out art galleries, film showings and an improv comedy show. DMAFF events will take place in downtown Dayton at the K12 Gallery, Blind Bob’s, Gilly’s and the Black Box Improv Theatre. Doors open at 11:30 a.m., and the last event finishes around 2 a.m.

The pair’s initial foray into event organizing was a 2010 benefit concert for the Yellow Springs skate park (where it was hosted) and to raise money for relief efforts in Haiti following the 2010 earthquake. The two have been best friends since second grade, and their shared interest in the world of music and art led them to work together on the concert, Epling said. The concert cost attendees $2 each and raised $1,200, which Epling said was an impressive and surprising amount for their first effort. Most recently, the pair put on Springsfest, an all-day Yellow Springs music festival in front of the Bryan Center. The two now book events under the moniker Great Guys Entertainment.

This year is the 12th year of the Dayton festival, and its legacy makes planning an exciting but daunting project, Epling said. The pair was handed the reins to DMAFF at the close of 2014’s festival. Attendees were excited to see the festival continue, she said, and expectations were high.

“People kept saying, “Don’t [expletive] this up,” she said with a laugh.

But 2015’s DMAFF, their first as the sole organizers, went off without a hitch, leaving the pair feeling “pretty natural and good” about how they handled their new charge. As seasoned organizers, part of the challenge of organizing this year’s festival has been figuring out how to maintain the event’s history while expanding the offerings, Stratton said. The festival has always been about championing local talent, he said — noting that his bands have played the festival in previous years — but his goal has been to draw not only Dayton residents but more people from outside the city.

The “really high caliber of musical talent this year” will help do this, Stratton said. National touring acts like Maps and Atlases and Tweens will be playing the festival’s main stage, as will Yellow Springs melody makers Speaking Suns. The city’s funk roots and accessibility has made Dayton an important Ohio music city, even if it occasionally gets overlooked. Stratton himself cut his teeth as a musician playing in a number of Dayton clubs, and hopes that the festival will help bridge the gap between older and newer Dayton music scenes.

“Dayton was once a major music city,” he said. “We want to rekindle that essence and bring awareness to the city’s potential. People in Dayton are currently working very hard to reinvigorate the music scene and make the city a national stage.”

Epling, who is DMAFF’s arts manager, said that Dayton is home to a vibrant arts scene, including galleries such as K12 and Tejas, which will be hosting some of the art events at this year’s DMAFF. Attendees can also visit a tent by the main stage where artists will be exhibiting and selling their works. For Epling, DMAFF is about creating a safe and welcoming space for new artists.

“The art scene can be intimidating,” she said. “If I can provide this space for one artist, I’ve accomplished something.”

DMAFF’s film component has also grown under Great Guys’ watch. While last year’s film showings were limited to a few screenings, this year’s festival will feature an appearance by Yellow Springs resident Joel Levinson and his brother Stephen, both filmmakers and comedy writers who grew up in Dayton. On Saturday, they will be showing a number of their short films and films that inspired them, and will later perform an improv show at the Black Box Theater.

“Just about all aspects of the festival have been expanded this year,” Stratton said. “It will be really fun to just walk around and engage with all of the artists, musicians and directors.”

The pair — with help from a number of their close friends — began putting DMAFF 2016 together in February. It’s a “pretty massive undertaking,” Stratton conceded, but extensive planning and organization is necessary to make the festival the best it can be.

“We want the festival to have a unique identity, but that’s only possible if we’re really involved,” Stratton said.

In fact, the organizers have been heavily involved in crafting the aesthetic of the festival. Epling and Stratton have made many of the props, decorations and signs that will be seen around the festival, including giant mugs of beer.

“We want to encourage the general notion that it’s important to create, whether you’re a musician or filmmaker or artist in any field,” he said. “We’re not just supporting the arts — we’ll be there creating too.”

The same friends will be volunteering at the festival, as will numerous people from Yellow Springs. Epling estimated that around 80 percent of last year’s volunteers were from the village, and she is hoping for an equivalent turnout this year as well.

Epling admits that trying to strike a balance between event organizing, her regular full-time job, making art and maintaining a social life can sometimes make for a harried schedule, but it’s all in pursuit of the things they love. Stratton said that he is already deep into planning next year’s Springsfest. “There’s no rest for the wicked,” he said, but both Stratton and Epling agreed that it would be a dream come true to do Great Guys Entertainment full time.

“I’m not good with some kinds of pressure, like speaking in front of people,” Epling said, “but the stress of bringing people and artists and musicians together feels great.”

Information about DMAFF 2016 can be found at dmafffest.com or on Facebook. Tickets are $15–35 and can be purchased online or at the festival.