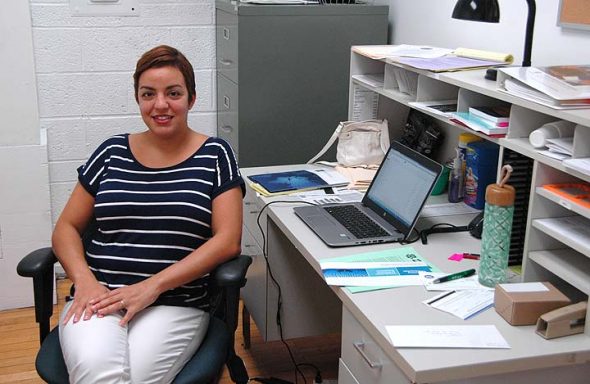 Dawn Boyer was hired as director of advancement and community relations for the Yellow Springs Schools, a newly created position designed to raise funds. (Photo by Dylan Taylor-Lehman)

Village school funding gets a face

Boyer’s position is part of the district’s strategic 2020 plan, which calls for “enhancing new revenue streams” and “developing new funding resources” to support the larger educational goals of the district. Boyer will lead the district’s efforts in grant procurement, development, marketing and communications, according to a district press release. The money she will raise will go primarily toward funding the district’s project-based learning (PBL) activities.

Boyer officially started her position on June 1 of this year. The job is a sort of homecoming for Boyer, who graduated from Yellow Springs High School in 1996. Boyer worked as an education grant writer in Florida for 14 years and moved back to Yellow Springs with her family to take the position.

What her position entails

Yellow Springs schools currently operate with local, state and federal funds, which add up to the $8 million annual budget. The goal is to “create a diverse revenue stream not wholly dependent on tax-payer dollars,” said Basora.

“Fiscal stability is a critical goal for any district to preserve crucial programs that make a difference in a student’s education,” said Yellow Springs Treasurer Dawn Bennett in a press release. “Creating this position at Yellow Springs Schools is a bold step toward sustainability.”

While it is common for schools to bring in resources through various fundraising activities, or to set up foundations outside of schools to fundraise with their own staff, a full-time development director position working as an employee of the district is somewhat unique, especially for a public school system, Boyer said.

Boyer’s position is funded through the school’s general fund. Her annual $70,000 salary plus benefits has led to some discussion of whether the position will pay for itself. Basora is certain that the benefits of having a professional procurer of funds on staff will yield the kind of funding that will benefit the schools’ mission.

“Having Boyer is an investment in new revenue streams,” Basor a said. “Money invested in her will come back many times over.”

The plan is to create an new revenue stream through a variety of fundraising channels. Boyer will be pursuing state and federal grants for the district, creating an alumni network and spearheading an annual appeal to donors in the community, in which community members, former parents and students and business owners are asked to donate money or supplies to the district. According to district literature, the goal is to raise around $150,000 per year, with an ultimate goal of raising around 5.5 million dollars by 2026.

Proceeds from the annual campaign would go to funding PBL projects and related expenses, as well as PBL-related teacher training and development, such as attendance at high-level conferences and staffing a PBL training center in Yellow Springs. The money could also be used for the district’s maker space and to fund student trips to other countries, the latter of which reflects the district’s aim that its students be “global change leaders,” said Basora.

Promoting PBL is crucial to pushing the possibilities of the district, he said. Some schools have been doing deeper learning for 25 years and they’re still on the cutting edge of project-based learning. “What are the best ways to reach students and provide a well-rounded education that speaks to their needs?” he asked. The strategy is about long-term innovation, he believes.

“I have a strong belief that the community is willing to give,” Basora said. “They just haven’t been asked. People want to know what they can do to contribute.”

The inaugural campaign follows the school’s fiscal year, running from July 1 of this year to June 30, 2017.

The funds will be managed through the Yellow Springs Public Schools Capital Fund, which is administered by the Yellow Springs Community Foundation. School administrators would appeal to the foundation’s public funds committee to fund their respective projects. The funds could be used as they are collected from the community, as opposed to waiting for the whole $150,000 goal to be met. Boyer said that part of her job entails working closely with the YSCF, coordinating the dispersal of monies from the approximately 60 funds the foundation oversees.

“Anybody that cares about the health and vitality of our community knows that it is affected by the quality of the school district,” Boyer said.

A third duty will be establishing an alumni association for graduates of Yellow Springs schools. There are an estimated 3,000–4,000 alumni who could be included in this network, she said, a major constituency that has not yet been tapped. An alumni would be in control of dispersing the money they raise, said Bennett. These funds wouldn’t automatically go to PBL activities.

“But it’s not just about donating money — it’s about sharing resources, information and support. Yellow Springs alums feel strongly about their high school in a way that other districts don’t,” Boyer said.

State language requires that districts provide an “adequate education” to their students, Boyer said, but her position aims to ensure that resources are brought in to bridge the gap between “adequate” and “excellent” schools. Innovation in education can be tough to implement, she said, but Yellow Springs has committed to these changes, and the district needs to provide the resources to make them happen.

“Education is crucial to the kind of people we want to put in the world,” she said.

Boyer moved to Yellow Springs from Cleveland when she was 10 to live with her father and stepmother. Although her stay in the village was intended to be somewhat temporary, she begged her mom to let her stay, which she did for the duration of her scholastic career. She loved school, she said, and humbly characterized herself as a good student. During high school, she played basketball, volleyball, and ran track, though the latter sport fell by the wayside when she discovered musical theater.

“I cannot think of Yellow Springs without thinking of my youth,” she said. “Those formative years here were so important.”

However, like any teen eager to discover the world for herself, Boyer happily went away to college in a different state and got a job in New York City not long after graduating with a degree in sociology from Northwestern University. She worked at an education research consulting firm, which entailed working with schools of all pedagogical approaches, she said. New York City alone has almost 2,000 schools.

Thanks to her writing ability, Boyer said she was sent to a “grant writing boot camp,” where she became a student of the daunting and counterintuitive federal grant writing process.

“Her writing ability is tremendous,” Basora said, noting that it was likely thanks to her teachers in Yellow Springs schools.

After a stint in Florida, where Boyer was able to telecommute for 10 years, she was happy to explore other employment prospects when they came available, such as the position in Yellow Springs. Moving back to a place where she felt so included and encouraged was important to her, especially because she now has a family of her own. She and her husband will be sending their three children to Yellow Springs schools.

Boyer’s previous connection to Yellow Springs imbues her mission with the passion of someone truly invested in the people around her.

“I am eager to begin the work of furthering our reputation as a world-class, student-centered public school system,” she said. “I really care about this community.”