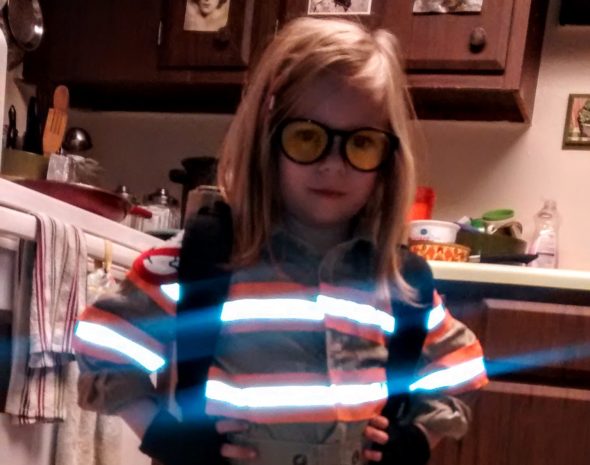 Who ya gonna call?

BLOG — Ain’t afraid of no ghost

When the new “Ghostbusters” movie came out, my husband took my 6-year-old daughter Lucy to see it while I was at work. I remember being annoyed; ostensibly because we hadn’t vetted it to see if the movie was appropriate for kids, but realistically because I had wanted to see it, too. Much was made on the Internet in the months before the film’s release; it was panned before it was ever seen by legions of bloggers, vloggers and commenters, who whined and opined that the new, all-female cast of the reboot of a classic film could somehow do harm to the beloved franchise simply by existing.

Lucy, of course, was completely unaware of any of this. All she knew was that when she saw this character, it was love at first sight. 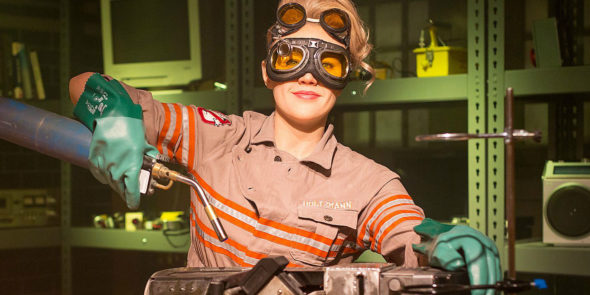 This is Dr. Jillian Holtzmann, the engineer and tech genius of the new Ghostbusters, played by comedian Kate McKinnon. Lucy has not stopped talking about her for months. I don’t think a day has gone by when she hasn’t said the phrase “You just got Holtzmann’d, baby!” at least once. More than once, she has asked me to change whatever’s on the TV to something “more Holtzmann-related” — that’s a direct quote, by the way. When, for her birthday, we presented her with a figurine of Holtzmann in the Ecto-1, she was speechless in rapture.

So I’m sure it’s obvious at this point who Lucy decided she wanted to be for Halloween.

Since Lucy was born, I’ve gotten more serious about Halloween. Having seen the Mills Lawn Halloween parade several times, and some of the costumes on offer there, I realized that people around here ain’t playin’ when it comes to Halloween fare — seriously, I remember seeing one kid dressed as a rooftop one year. Not a house, just the rooftop. That’s serious business.

I’ve also become fairly serious in my enjoyment of Halloween. I love spooky things, a love which I’ve passed on to my daughter. At night before bed for the last several weeks, we’ve been reading stories from the “Scary Stories to Tell In the Dark” collection. I know, this doesn’t seem like particularly good bedtime story fare, but Lucy is serious when she repeats the line from the “Ghostbusters” theme song: She ain’t afraid of no ghost.

That makes one of us. I’ve never really believed in ghosts, but have always been wary of even the suggestion of them. I remember once, seven or eight years ago, I went to visit a friend and her mom out in rural Kentucky. I stayed late, and after it was dark, they told me that, on multiple occasions, they’d seen the ghost of a Native American woman walk from the fields abutting their property into the edge of the yard before vanishing. I almost could not leave their house to get into my car when it was time to leave for fear of bumping into her.

Even though I love spooky stuff, there are still times when I’m up late after everyone else has gone to bed that make me feel uncertain. I turn the lights off in the living room to go to bed and feel the hair rising on the back of my neck. I think we all get this from time to time: the feeling that the dark has secrets that we don’t know, and perhaps don’t want to know.

That said, I wish I could believe in ghosts. Several years ago, I went on a ghost hunt at a Springfield business which sells ghost hunting equipment, which was housed in the historic Robertson building (which has since been torn down). Those of us involved in the ghost hunt were allowed to freely roam the factory floors of the old building. For me, the hunt was part of a story for WYSO, so I was wearing headphones and recording. I brought my husband, Anthony, a staunch disbeliever in anything supernatural or paranormal; even so, unleashed on this old building in the dark, he was as giddy as I was. At one point, Anthony and I were alone in one of the giant rooms. With the headphones on and the volume turned up, I could hear every sound in the room amplified, made sharper: each creak of floorboard, each drip from ancient pipe, each whisper from across the room. I strained and strained to hear some voice that didn’t belong. My anxiety was cranked up to 11, worried that I wouldn’t hear a ghost, terrified that I would. Not finding a ghost on my hunt would be disappointing, but finding one — that would change my whole life.

Lucy’s different; she hasn’t decided yet whether or not she believes in ghosts, as the evidence has been inconclusive for her thus far, but either way, she says she’s not afraid of them. I chalk it up to her love for Dr. Holtzmann, who meets the challenge of the spirit world with aplomb — and with lasers. I also think it’s just part of her no-nonsense personality. Let me back up: there is plenty of nonsense in Lucy’s personality, but she has turned out to be something of a skeptic in general. I swear, I tried to get her to believe in Santa Claus. It just didn’t take.

As for my ghost hunt, I didn’t find anything on my own. There was some action with some of the more seasoned ghost hunters (which you can hear in the WYSO story at this link) which made for good show business, but I’m still not totally convinced it was the real deal.

But that doesn’t mean I didn’t have fun, and it doesn’t make the walk through the darkness of my own home any less scary, any less thrilling. Because, after all, it is both: the thrill we take from wondering if our notions about life and death are wrong comes directly from our fear. Fear can be delicious, in that way, something to be savored.

Tonight as she walks the streets of her hometown wearing an homage to her one and only true love, I’m sure Lucy will have a great time sampling the treats, both literal and figurative, that Halloween has to offer. And I also hope she’s ready to protect me, busting any ghosts that cross our path — whether real or imagined. 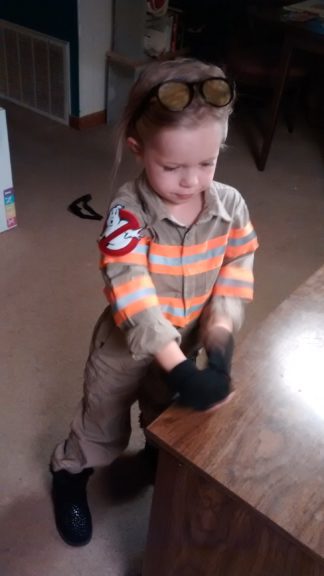 One Response to “BLOG — Ain’t afraid of no ghost”