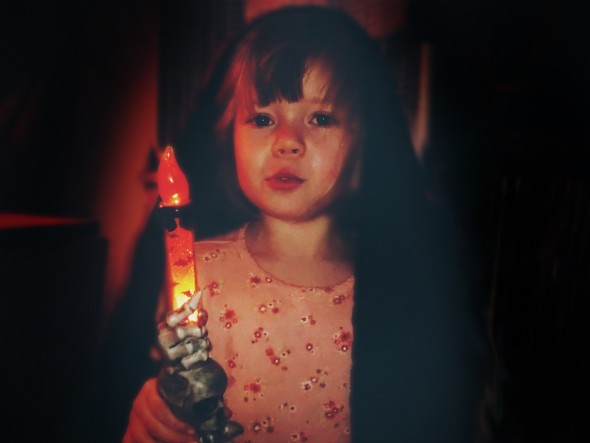 "Your cadaverous pallor betrays an aura of foreboding ... "

“When hinges creak in doorless chambers, and strange and frightening sounds echo through the halls; whenever candle lights flicker where the air is deathly still — that is the time when ghosts are present, practicing their terror with ghoulish delight. Welcome, foolish mortals … “

These words greet guests after they enter “The Haunted Mansion,” a popular dark ride at the Walt Disney World theme park in Orlando, Fla. In this attraction, riders enter the dimly-lit foyer of a decrepit manor house, and are summarily guided through its vague history, and current state of spectral habitation, by the disembodied voice of the “Ghost Host.” Guests ride in a “doom buggy” through scenes of light comic macabre: an unending hallway where a candelabra fl oats, a seance conducted by a head in a crystal ball, a “swinging wake” where spirits from all periods of time gather for dancing and revelry. All of this with an attention to detail and ambiance that only the cash flow from a cultural oligarchy like Disney could incite.

My daughter Lucy and I love to watch ride-through videos of “The Haunted Mansion” on YouTube. As a person obsessed with theme park rides (see previous blogs) who used to live in Florida (see other previous blogs), I have, of course, ridden it many times over the years. I rode it with Lucy a few years ago, but at the time she was 3 years old, and not really impressed with the complex artistry involved. Now, it seems, she’s changed her mind.

Naturally, it has at least a little to do with the time of the year. The air is cooling, plants begin to wither and fade and more and more of the day is taken up by darkness. Halloween approaches.

Kids love to creep themselves out, and my particular kid is no different in this regard. There’s one effect in “The Haunted Mansion” that Lucy always insists that we skip when we watch the videos, and that’s one where a portrait of a young man slowly metamorphoses into an old man, a corpse and, finally, a skeleton.

I had a similar affliction as a kid: there was this wonderful, horrible series of books in the school library which used to terrify and delight me, “Scary Stories to Tell in the Dark.” Each story was only a few pages long, and many of the stories were age-old urban legends, told in simple language: the hook on the car, the bride found locked in the trunk, the call coming from inside the house. The three books are, in fact, a labor of love in folklore by Alvin Schwartz, who collected the tales; at the end of each book is a scholarly compendium of sources and notes on the origins of the stories, which is kind of surprising for a children’s book.

But, as anyone who read the books as a child will tell you, the stories themselves would have been nothing without the illustrations of Stephen Gammell. Each story was accompanied by a drawing, and each drawing was somehow at once ghastly and beautiful. In particular, my two favorites were the illustrations for the stories “Harold” (about a scarecrow who is both sentient and, naturally, murderous) and “Wonderful Sausage” (spoiler alert: the sausage is not made out of normal sausage stuff). 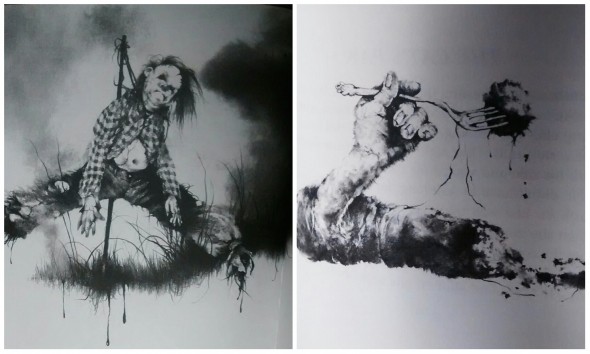 Both the stories and the accompanying illustrations repulsed me, while at the same time fascinating me, beguiling me, enticing me to read them again and again. I bought the three books together in one volume on Amazon earlier this year, and have to say that, even as an adult, I can’t help but be a little spooked if I read them in the dark (as the title suggests). I’m writing this right now in a dark room by myself and those pictures up there are already creeping me out.

Around this time of year, haunted house attractions start popping up in barns and cornfields and old schoolhouses, and amusement parks undergo a costume change to fit a Halloween theme, but all of these places seem to offer “terror” fare; that is, things jumping out at you, chasing you, grabbing you, loud noises, the gorier and more shocking, the better. I have no time for this kind of nonsense. Where’s your sense of narrative, haunted houses of the 21st century? Where is your ambiance? Yeah, sure, there’s a guy running around with a chainsaw in your haunted boiler room or whatever, but what’s his motivation? Is there a story there? What about creaking floorboards and rattling windows and whispers in the dark? What about mystery?

Listen: my daughter is obsessed with death right now. She often asks me about family members who have died, what happened to them, where they are now. Some of her toys are now “ghosts,” and all of her imaginary friends are dead. More than once, she’s broken into song at the dinner table: “Mamaaaa, oooooooh! I don’t wanna die! I sometimes wish I’d never been born at all!”

This is difficult for me, to be honest; I can’t lie to her. She will die one day, and so will I, and we both know it. So we just sit there in her dark room, hugging, and we both think about the thing that’s coming for all of us, one of these days.

This is what this time of year is all about. This is why kids love to be spooked; it’s why we all love it: it allows us to take the idea of our impending end, turn it over in our hands, really look at it. Enjoy it. Revel in it. Have fun with it. It’s inevitable, of course, but it’s also a mystery: how, when, what about after? It’s both horrifying and delicious, and the fact that there are no answers only whets the appetite. This, I can only assume, is why my daughter both hates and loves the changing portrait effect in “The Haunted Mansion”: it invites her to think about how she herself will change through the years, and what the end result of those changes will be. Or it could just be that she’s 5, and 5-year-olds are living exercises in contradiction. What the heck do I know?

Anyway, I guess my point is really this: we need better haunted houses, right? I just want something with an absurd attention to detail, fantastic music, maybe a few knowing chuckles, with grade-A actors and/or animatronics and effects, which makes me serious contemplate my own mortality. Is that so much to ask? Foolish mortals, indeed. All I can hope is that my daughter takes her love (and fear) of spooky things and grows up to create a creepier world for all of us. She’s already practicing: