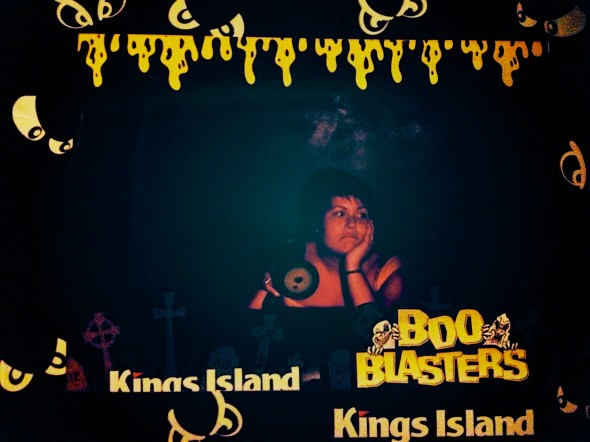 My husband has known for several years now that the formula for getting a really long back rub is as follows:

• Sit down.
• Ask for back rub.
• After back rub has commenced, proceed to ask me about my favorite amusement park rides.
• Feign interest in my overtures to said rides, a process which takes no less than a half hour at best, and enjoy the back rub that ensues throughout the entirety of this monologue.

Because I lived in Florida for 13 years or so, gentle readers can probably guess where the majority of my experience in this realm comes from. However, it’s the five years of my childhood spent in rural Kentucky, less than an hour from Mason, Ohio, that I draw upon for the following musing:

The first roller coaster I ever rode was the Adventure Express at Kings Island. Those who have had the pleasure of riding it will recall the vague Indiana Jones-esque theming of the mild wooden coaster, the near-painful jerks it makes as it turns one way or another and the two steep climbs, both of which lead the rider to believe a long drop is coming, and both of which end in colossal fake-outs. Despite this breaking of the social contract between every roller coaster and its riders, which dictates that every anticipatory incline be met with its correlating high-speed descent, I was, at the age of 8, hooked.

And then I went and did a thing I had always thought I would never do: I fell in love with and subsequently married a man who hates roller coasters.

That’s not to say that my husband, Anthony, has refused to ride roller coasters with me. It’s just that I know that he reconsiders his commitment to love, honor and cherish every time he does ride one. 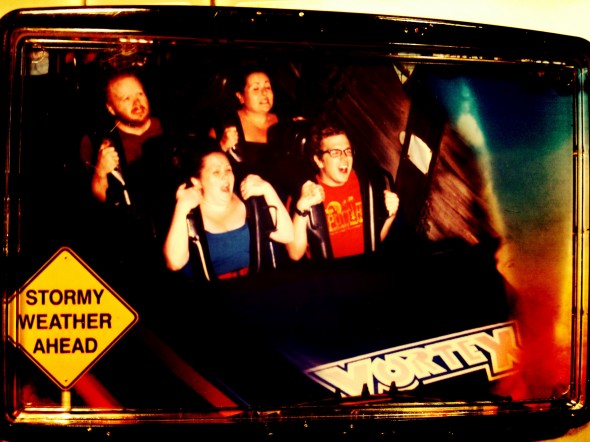 In the back left is the face of a man who is deeply contemplating the meaning of “for better or worse.”

Last year I was gifted a Gold Pass to Kings Island by my mother-in-law, who like some wise and benevolent fairy godmother, granted me my heart’s true desire. But I was the only one in my family who received this fabulous gift, so it meant I’d spend a good amount of time riding roller coasters on my own.

There is something a little strange about a grown person leaving her loving family behind for hours at a time to strap herself into what are essentially super fast murder machines, but everyone has her thing, and this is mine. Those of you who’ve never tried going solo to an amusement park, think about this: you go at your own pace. You ride what you want to ride, and you rest when you want to rest. You eat ice cream at least twice, because you’re buying for one. If you ride the Adventure Express with a train full of kids, you get to laugh at their consternation over the aforementioned fake-outs without being judged. And if you don’t have the pleasure of conversation to ease your way through long line waits, there’s always the collected works of David Sedaris on audiobook, available for download to your mobile device of choice from your local library.

And speaking of lines, you’ve got the ultimate ace up your sleeve on busy days. You are the one the park employees look to when there’s a party of three and a 45 minute wait. You are the rare, but beautiful, single rider.

For the uninitiated, the advantage of being a single rider means that you often get to move up in line when there’s an empty seat on a ride. Of course, you’re never really a single rider, because you’ll always get paired with a stranger, and this could present an opportunity to make new friends. More often than not, however, it’s a fun and informative way to observe at close range how other people in the world react when they’re strapped into a metal car and thrown into the atmosphere at various angles and velocities. In my experience, most scream, either from joy or from some amount of genuine terror. But my favorite so far was probably the man who rode a roller coaster the way anyone else might enjoy a glass of wine or, I don’t know, a good jazz record or something. He sat casually in his chair, hands loosely at his sides throughout the entire ride, and at various intervals expressed his approval by saying, at a normal volume, “Nice. Real nice.” Sometimes he’d nod his head in approval.

Despite the charms of being a single rider, there comes a point at which one does wish she could share her love of roller coasters with some like-minded individual. If only there were someone made in my image, someone who, perhaps, lives very nearby and possibly even shares some of my DNA.

This summer, I purchased Gold Passes for each member of my family of three, in hopes that I could train up my daughter, Lucy, to become my roller coaster partner.

The only hitch in this plan, of course, was that at the beginning of summer she was three years old, and stood at a mere 35-and-a-half inches. The smallest roller coaster at Kings Island, situated in the Peanuts-themed kids section of the park, requires riders to be 36 inches or taller.

Have you ever stood in line for a ride with a small child, only to get to the front of the line and realize she’s not big enough? There is no word for that kind of heartbreak, for either mother or child. Especially when other, clearly younger children were making the cut instead of my daughter, who through no fault of her own was cursed with two short parents. “Look at that kid,” I fought back the urge to say to the ride operator, “he can barely hold his own head up, and he’s allowed on this infernal machine?”

Nevertheless, between Kings Island’s adjacent water park and its other, less height-sensitive rides, we managed to have a good, if slow-moving time. We eventually both made peace with the fact that we would ride no roller coasters together this year. 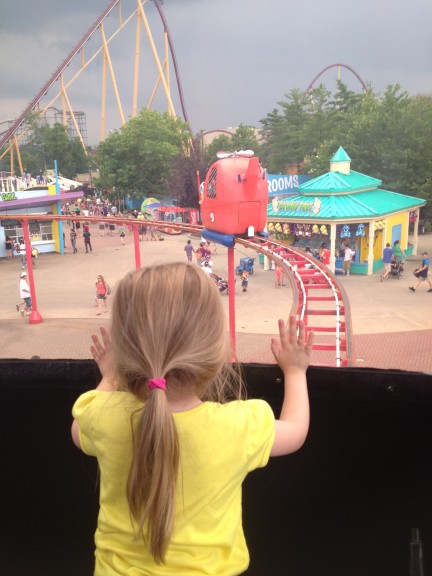 I tried not to get my hopes up when I would dress her in jeans and they would seem just a little shorter. “They probably just shrank in the wash,” I would tell myself. Likewise, I ignored the lift in my heart when she finally managed to reach the light switch on tiptoe. Was I imagining things, or did her bearing seem suddenly more regal these days, as though the tall child within were just waiting to transform the adorable, but pint-sized child on the outside?

Finally, after her fourth birthday at the end of August, I decided it was time to quit playing games and take the plunge once more. We woke early on a Saturday, and I armed my daughter with sunscreen and what appeared to be her thickest-soled pair of tennis shoes, and drove to the island of kings once more.

I’ll spare you the tale of suspense that was waiting in line to find out if she made the cut and happily report that all children, even mine, get taller. We did, in fact, ride The Great Pumpkin Coaster on a mid-morning in August, and I’ll let you guess who was the most excited about it. 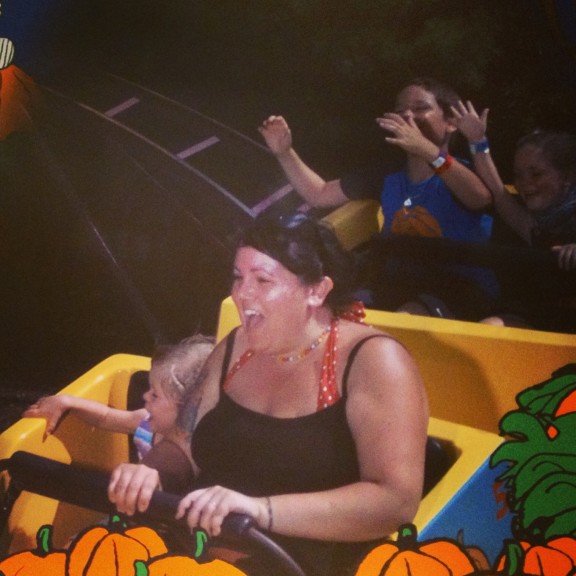 It was the one you can actually see in this picture.

So I guess I say all of that just to say this: I really dig roller coasters. I really dig my daughter. And though I have enjoyed the prestige the title carries, I do look forward to the day when I’ll no longer be a single rider.