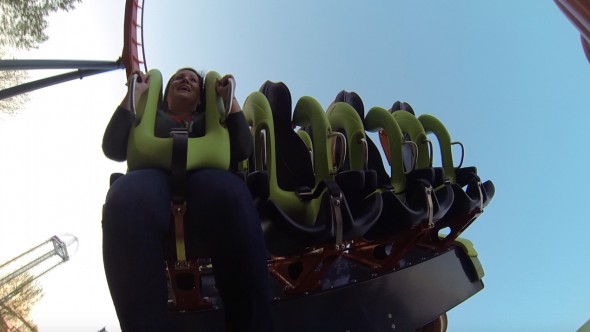 Working at the Yellow Springs News means that I receive a lot of press releases in my email inbox each morning. Since, in general, the News only covers hyper-local events, a lot of these press releases don’t make it to our pages, but I still like to read them to be sure. In an ideal world, there would be a section in the News dedicated to important announcements like this one:

I’m never sure precisely how I get on the mailing lists from some of these organizations. For example, I get semi-regular press releases from Cedar Point amusement park up in Sandusky. As mentioned in a previous blog, I’m a fan of roller coasters, and a frequent patron of Kings Island, which is a sister-park to Cedar Point and owned by the same company, Cedar Fair. I assume my work email address got on the Cedar Fair radar via the Internet’s all-knowing black magic, so now I am in the know about all the goings-on of an amusement park to which I have never been or even seen up close. 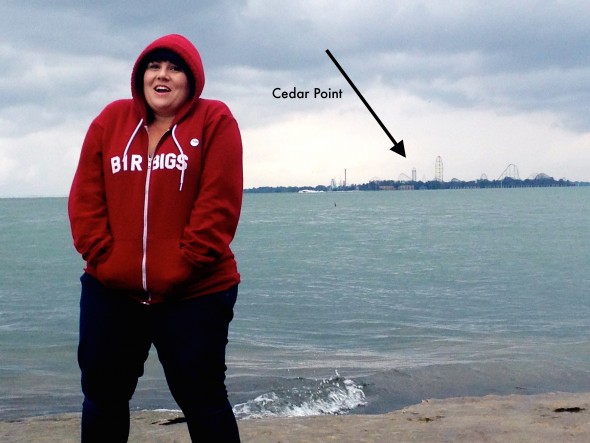 In Marblehead on the banks of Lake Erie around this time last year, unaware of what destiny (i.e. my email inbox) had in store.

A few weeks back, I received a press release from Cedar Point announcing the unveiling of their newest attraction, a floorless roller coaster called Rougarou, at a media event to be held on the morning of Friday, May 8, one day before the park opened for the season. At this event, media producers would be welcome in the park from 5 a.m. until 9 a.m. to ride the coaster as many times as they liked. Obviously, this was another of those press releases I’d have to ignore.

My husband Anthony has long lamented my reluctance to use my media “connections” for what I can only assume would be evil. “Get some free baseball tickets!” he’s said on multiple occasions. I remind him that we don’t cover the Dragons, or the Clippers, certainly not the Reds, and anyway, can’t you get a cheap ticket for like, ten bucks? But he maintains that it’s the principle of the thing. I could, he reasons, always get the tickets, enjoy a game or two and then, if I feel like it’s the right thing to do, write a blog about it. I mean, I like baseball a lot, but I don’t think I like it enough to stoop to jiggery pokery and then have to write a blog about it afterward. Is there anything in the world, I ask myself, that I like enough for that?

On Friday morning, May 8, around 4:45 a.m., I awoke in a Sandusky motel, rubbed my eyes and hopped into my car, and proceeded to drive about four miles down the road to Cedar Point for the first time in my life.

I parked my car and walked up to a checkpoint where I gave my name to a couple of attendants. I had RSVP’d a week previously and my name was sure to be on the list, but even so, I had that fear that maybe they’d figured out I was just a lowly itinerant blogger from some village three hours away and would say to me, “I’m sorry, ma’am, but I’m afraid we can’t let you in because we think you’re just here to ride our ride a bunch of times and then maybe try and write some half-baked observations and witticisms about it on your MacBook after your husband and daughter have gone to bed.”

This did not happen, thankfully, and the delightful woman who checked me in gave me a schmancy lanyard to hang around my neck, signaling that I was from the “media,” which had a small, orange flash drive attached to it. 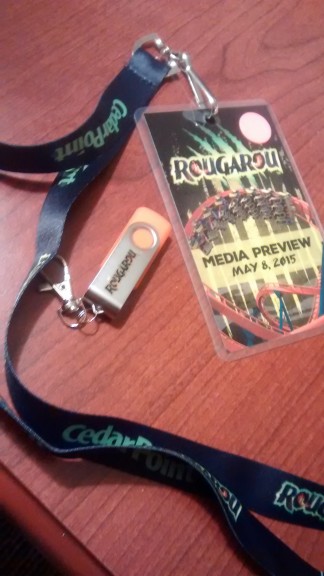 This is the most official thing I have ever worn or will probably ever wear, and it has a roller coaster on it.

I walked into the park which, at a little past 5 in the morning, was totally deserted except for the area where Rougarou was operating. (The roller coaster was named, by the way, after a “legendary creature in Laurentian French communities linked to European notions of the werewolf,” or so Wikipedia tells me.) It was still dark, and it was eerie and fascinating to walk through an unmanned amusement park by myself for a few minutes; come the weekend, the place would be swarmed.

I rounded a corner and saw a few dozen folks milling around. There were some people who were not from the media, and I found out that these adults and children had been the winners of an early-ride drawing, and I mentally saluted their devotion. 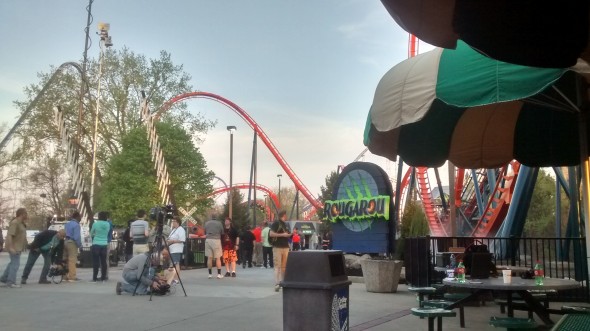 This photo was taken as I was enjoying a complimentary plate of danishes and a can of refreshing pop. I can only assume this is what royalty feels like.

Looking around at the assembled media, it was easy to tell who was there from TV and who was coming from elsewhere. For a start, naturally, TV folks had big cameras set up at strategic sites, their satellite vans parked nearby, and the reporters were instantly recognizable even to a person, like me, who was not familiar with the area’s local news personalities: they looked fantastic. Hair, clothing and attitudes impeccable. They certainly did not look like they had dragged themselves out of bed in a motel after a night of solitary pizza and watching “Golden Girls” on their laptops.

Newspaper writers were also fairly apparent; they were mostly dressed in polo shirts and khakis, sometimes wielding nice cameras, and not opposed to a friendly handshake.

There was a third category of media representative there, harder to suss out. These were mostly adults in the 25–35 range, dressed comfortably in ball caps, yoga pants, that sort of thing, snapping photos with iPhones and, occasionally, intimidating cameras with telephoto lenses, and a real sense of the mechanics of the ride. These were my favorite people. These were Internet people.

And then there was me, boppin’ right down the lane after three hours of hard-won sleep with nothing to recommend me but the aging Nikon my dad gave me for Christmas five years ago and a big smile. A smile that was there because, looming before me, was the long, orange and green track of Rougarou, which was shortly to propel me (properly harnessed) at about 60 miles per hour, upside down, sideways and over a 137-foot drop. All of this, before breakfast even.

Let me stop here to say that, at 31, I find myself much more susceptible to the effects of roller coasters than I did in my relative youth. That is to say, after rolling around on a steel track at high speeds for a few minutes, I don’t always want to do it again immediately. Or rather, I do want to do it again, but my head and stomach do not.

Nevertheless, I rode Rougarou three times in a row. This fact is my official endorsement.

The orange flash drive I received, which I mentioned earlier, turned out to have a very specific purpose: it was used to store a video containing my first ride on the Rougarou.  A video I will present here, for your amusement:

As I get older, I find it harder and harder to rationalize doing things just for my own benefit. There’s a family to think about, a job to think about, a future, I suppose, to think about. This is, as we all know, part and parcel of growing up. It’s not something that I or many others typically bemoan, but it does result in a fair amount of daydreaming. If there were only me to consider, for example, couldn’t I just skip making dinner and eat pizza? Couldn’t I take a leisurely bath afterward and watch sitcom reruns from the ‘80s while I soaked? And couldn’t I get up in the morning and just ride roller coasters if I wanted to?

Sometimes the people in your life come together to make it possible for you to think only of yourself. Your husband urges you to take the night off, a fellow employee happily agrees to take over your desk duties (thanks, Carol!) and your editor says sure, why not turn it into a blog? And for a few, brief moments, it’s that thing you always dreamed about when you were a kid: total, hedonistic freedom to make any and all decisions based solely on your whims. No matter how your stomach might feel later. 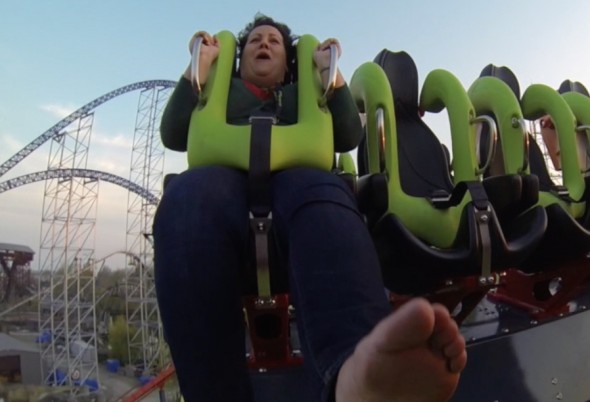