Let me begin by saying that I just spent a whole hour looking through a folder I found on my desktop containing about 100 pictures from when my daughter Lucy was born last August. Of course, I went through them, more than once, sighing wistfully. The day of her birth will go down in my personal history as my single greatest triumph, just above winning first place in the regional Optimists Club speech contest in seventh grade. It was the perfect wrap-up to the perfect summer.

And by “perfect summer,” of course, I mean the worst summer of my life.

Perhaps it’s a little early for the subject of summer, but Sunday’s unseasonably warm weather has me reminiscing. By the time June hit last year, I had gained around 30 pounds, my feet had swollen to roughly the size of cornish hens, eventually breaking at least two pairs of shoes (very true, very ridiculous story), and my legs and arms were perpetually itchy. There were days when I was so hot in the YS News office that I was literally spraying myself in the face with a water bottle every 15 minutes just to cool down. I was what some might refer to as a “sad sack.”

There was, however, one place I could go that made things just a little more bearable; one place that could soothe my heat rash-induced woes. That place was the Gaunt Park pool.

Last summer was the first time in my life I had ever visited a community pool. Having spent the majority of my youth 20 minutes from the Gulf of Mexico and the “world’s most beautiful beaches,” I doubt I would ever have visited such a pool even if my town had one. Thus, like a child, I had to be guided through the proverbial p’s and q’s of community pool function, such as the etiquette of showering before entering the pool. It may seem like an obvious courtesy, but you must remember that the only rules on the beach are: don’t drink, don’t bring your dog and for the love of God, stay off the sand dunes.  Where pool goers are required to shower and use the restroom before swimming, beach goers often use the water as their opportunity to get both out of the way at once.

More surprising than the shower rule, however, was observing as one of the lifeguards blew her whistle, and watching upward of 30 children exit the pool. This was the fabled “adult swim” of which I had heard tales: 15 minutes of uninterrupted swim time for grown-ups. Remember those perks you always thought would come with adulthood when you were a kid? Most of them, you eventually realized, came with a price: sure, you get to drive, but you also have to pay insurance. You get to stay up late, but you have to get up early and go to work. You get to eat whatever you want, whenever you want, but then you have to follow it with a chaser of Tums. Adult swim, however, is the only joy of mature life that is pure, unabashed, no-strings-attached. Adult swim, ladies and gentlemen, is our well-deserved reward.

And let me tell you, friends: I relished my reward. Most of the time last summer, I felt like this: 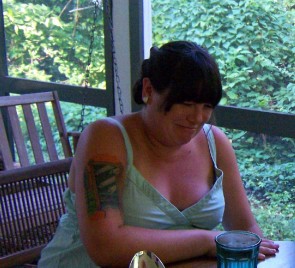 But when I went to the pool, I felt like this: 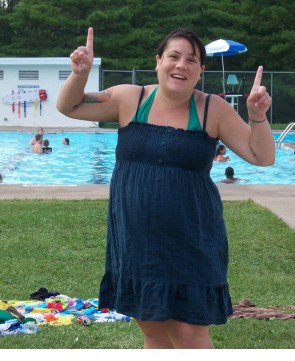 Why? Because in the pool, I was weightless. A good 20 degrees cooler, too. But mostly it was the ease with which I could move in the water. My perpetual itch would even subside. It was the only time, during the last two months of my pregnancy, when I felt like a normal human being.

The beaches where I’m from are amazing; there’s no getting around that. I spent many an angst-ridden teenage afternoon pondering the meaning of life, love and Wendy’s cheeseburgers while sitting in view of the grandeur of the beach. There is absolutely no way any pool could ever compare to the natural beauty of sand and tide.

Then again, I couldn’t imagine the same kind of community that I observed during my days at the Gaunt Park pool existing in any form on the beaches I have frequented in my lifetime. By and large, beaches are a tourist affair, even if you live near one. I have known quite a few friends who lived on the beach to markedly separate themselves, as wheat from chaff, from those visiting from out of town, because they were “locals.” But does being “local” really mean you appreciate something more? More importantly, does it mean you respect it more? After all, in my experience, it’s the “locals” who often feel they don’t have to abide by the “no drinks, no dogs, no dunes” rules. In the end, when it comes to appreciating the joys of nature, we’re all tourists, I guess.

Likewise, though I am not native to Yellow Springs, I would like to think that doesn’t lessen my appreciation of the village itself, or of the many amenities it now offers (and will hopefully continue to offer) to its community. I really enjoyed the luxury of the Gaunt Park pool, but also observing all the activity around me there: the complex infrastructures being built, whether in terms of melodrama or pool toys, by each group of children. Parents sharing blankets, food and conversation on the grass. The anguish of a child who has been called out of the water to sit on a bench as punishment for that most vaguely-defined of crimes: “horseplay.” The bliss of 15 kid-free, splash-free, noise-free minutes in the water. The approach of 30 small sets of toes, dipping into the pool as the end of those 15 minutes nears, itching, straining to hear the whistle. And of course, for everyone who enters the water, the feeling of lightness, of movement without consequence, of slow, fluid flight.

Long story short, I just want to go swimming. Last year’s weight, swollen feet and itch turned out to be good news: an amazing baby girl, who, when the warmer months roll around,  I can hardly wait to bring with me into the water.

(FYI: though the pool doesn’t open until June, pool passes are now on sale at the Bryan Center.)