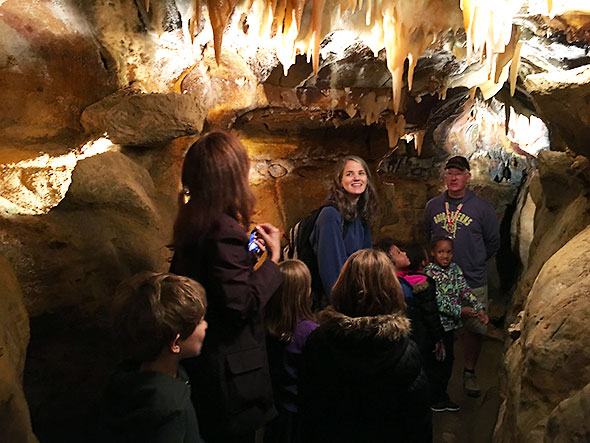 They didn’t warn us about the last 60 steps. Those steps lead up a flight of stairs out of the Ohio Caverns and back in the sunshine. I was nursing a knee injury that I sustained from a lively game of laser tag that the kids and I joined five days before. I had thoroughly enjoyed that game…weaving through the mirrored maze, springing up and down ramps on cat feet. The next morning however I stretched long and found my right knee unable to fully straighten. It popped when I put weight on it. Five days later my knee was bothering me still. It felt like someone had wedged a piece of paper between the tibia and femur.

Ahead of me, my son bounded up the stairs making for the light ahead like a vigorous seed sprout. Minutes before He had started to wilt near on our tour. No fan of the darkness, he was gently admonished by our guide to not lean against the walls of the cavern. We were visiting a special place. “Do you know the difference between a cave and a cavern?” the guild had asked the group of first graders and their parents. “A cave has only one opening?” offered a brave six year old. “No, caves can have more than one opening but you’re on the right track.” Turns out that caves have many natural openings to the surface—making them habitats for wildlife—but a cavern has none. You have to dig to find one.

The cavern we were walking was formed by an ancient river formed when glaciers retreated from the area. These glaciers carved out our very own glen but in the case of the cavern the river formed underground instead of above. After the river water receded as the glacial flood retreated north, the cavern remained a damp hollow sometimes a only few inches above its mud heaped floor sometimes a sink hole several feet deep. The cavern remained undiscovered for over 10,000 years impenetrable by flora and fauna. Only land-filtered water slowly seeping in through its cracked ceiling.