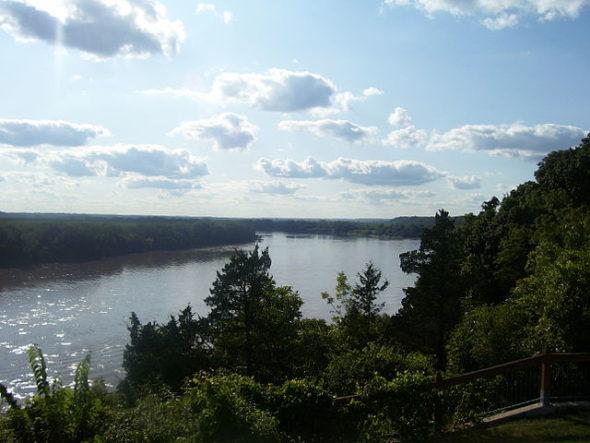 The Missouri River. An oil pipeline is slated to run across four states and near the Missouri River, the main source of water for those on the Standing Rock reservation. (By aimee castenell - Flickr: missouri river, CC BY-SA 2.0, https://commons.wikimedia.org/w/index.php?curid=18058625)

Children’s Montessori Cooperative and representatives from Antioch College are showing their support for the “water protectors” at Standing Rock, a Native American reservation in North Dakota and South Dakota, by organizing an equipment collection drive during the month of October.

The water protectors are protesting the construction of an oil pipeline that will run within a half-mile of the reservation, and which will transport 470,000 barrels of oil per day over four states. The pipeline is slated to run near the Missouri River, which is the main source of water for those at Standing Rock, and protestors worry that the pipeline could contaminate drinking water and disturb sacred sites. Native American and environmentalist demonstrators have been met with resistance, and sometimes violence, during their protest.

Those who would like to support the effort by donating money and equipment are encouraged to take a look at an Amazon wish list created by the water protectors to get an idea of the kinds of materials that are needed; the wish list is available here. Donated equipment will be driven to North Dakota on Nov. 18, and cash donations totaling $1,100 are needed for fuel, toll roads and supplies for the travelers. Any surplus funds will be donated to the Standing Rock Legal Fund. Donations may be dropped off at the following locations:

For more information on the Standing Rock protest, visit standingrock.org.