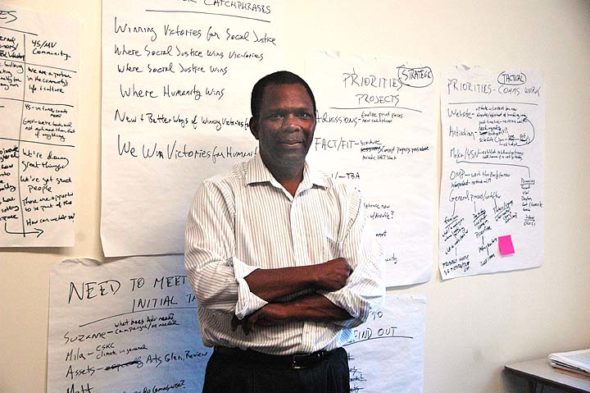 Mark Reynolds was recently hired as director of communications and marketing for Antioch College. While the post is new to him, the college is not: he’s a 1980 graduate and has been active as an alumni board member and advisor since the college’s closure. He recently posed in front of his “brainstorming” wall in his new office. (Photo by Audrey Hackett)

Thirty-six years after graduation, Mark Reynolds is back at Antioch College. The former theater and communications major, class of 1980, now occupies an office on the fourth floor of South Hall overlooking the campus’s quiet lawns. It’s a change for the Cleveland native, who’s spent the last decade in Chicago. But it’s also a homecoming of sorts.

“Antioch always meant a lot to me,” he said in a recent interview. “It’s where I came to be myself.”

Reynolds accepted a job this fall as the college’s director of marketing and communications, a position that’s seen considerable turnover in the past few years. He started on Oct. 24, one of three new members of the college’s leadership team. The two other leaders, Susan Lee in student life and Bill Carter in admissions, will be profiled in upcoming issues of the News.

Reynolds is recently retired from the US Postal Service, his primary employer for the past 31 years. But this new role is no retirement job for the 57-year-old. “I’m not sitting in a rocking chair,” he laughed. “I had a desire to get out here and give.”

A writer and communications expert, Reynolds’s long career with the post office, in which he progressed from clerk to district spokesperson, might have surprised his younger self. After graduating from Antioch, he was banking on a job at a radio station in Atlanta, where he’d previously co-oped. But the job fell through. “That was Plan A, and I hadn’t thought about Plan B,” he said.

Seeking out “something else I could do with my brain,” he got involved in radio, hosting a talk show on black issues for Cleveland public radio, then working in the newsroom. Thus began the second track of his career, journalism.

His exposure to news writing was especially revelatory. “I realized, ‘Oh, I like writing.’” His first print byline came in 1989, for the now-defunct alt-newspaper Cleveland Edition. He wrote for that paper’s successor, the Cleveland Free Times, as well as publishing freelance pieces in the Cleveland Plain Dealer.

All the while, he was still sorting mail in the Cleveland processing plant. But when a temporary communications position with the Cleveland post office opened up in 1997, he jumped at the chance to bring his writing skills into his day job. Another temporary position in Philadelphia and a move to that city followed, then a leap into a more permanent situation — a challenging communications and media relations position in Chicago.

He relocated there in 2006 with his wife, Patrice, a writer and jewelry maker, and their teenage daughter. It was a time of intense media and public scrutiny of the Chicago postal system. “I got there just in time for the wheels to fall off,” he said. But he managed the situation, turning around public perceptions and lifting employee morale. “I was able to accomplish a lot during my time in Chicago,” he said.

Meanwhile, he continued on his second, increasingly soulful track. In 2004, he began writing a column, called Negritude 2.0, for cultural criticism magazine Popmatters.com, which he still writes today. His beat is the history of black pop culture, spanning film, literature, art, music, TV and radio. Writing is a joy, he said. “When I’m writing, I feel a special sense of vitality.”

Not long after starting the Chicago job, he got an email from a friend telling him Antioch was closing. The news came as a shock. Though he had lost touch with the college after graduation, it remained a key piece of his personal history. “Antioch was formative,” he said. And so he got involved in the alumni effort to reopen the college, working from his area of expertise to advise the alumni board on communications around the closure and reopening.

It was the first time he’d been around Antiochians since graduating. “Though our trajectories were different, there was something about Antioch that bound us together,” he said. He was elected to the alumni board in 2010, and re-elected in 2013, serving as board president for two years.

And now he’s back at Antioch full time, as a senior member of staff, leading the next phase of the reopened college’s communications effort. He and his wife were not looking to leave Chicago — their daughter, now grown, remains there, and Patrice will relocate to Ohio in the spring — but when the job came through, the opportunity it offered seemed too important to pass up.

“I don’t think there’s any other institution like Antioch that can mean as much to our world going forward,” he said.

Right now the communications team consists of Reynolds and a graphic designer, Mike Soliman. As the college’s storyteller-in-chief, Reynolds is already hard at work sifting and shaping narratives. One wall of his office is covered with catchphrases, messages, themes, even a “need to know” list to orient him in his first weeks.

“We as Antiochians know we have a unique, fantastic story to tell. I want to help get that story out there in a way that resonates with all our different audiences,” he said.

The college’s profile needs to be raised and clarified, he believes. “Yellow Springs knows we’re alive and well, but rippling out from that the perception is less clear,” he explained. Some in the wider community don’t know the college was closed; others don’t know it’s been reopened. And some believe the college is “that hippie school,” he laughed. “I want us to be forward facing,” he said. “We retain our historic strengths, but we’re focused on today and the future.”

As an alumnus of the college who’s been involved in its rebirth, Reynolds brings both passion for the institution and a realistic understanding of “the challenges we face and where we stand.” While faculty, staff, alumni and students worked together to relaunch the college, the reopened college is not an end to those efforts, but a sort of perpetual beginning.

“We know that this job is not done,” he said. “Given Antioch’s history of innovation, the ‘next thing’ is always about to happen.”

As a young man, Reynolds chose Antioch sight unseen, on the recommendation of his sister, a student at nearby Central State. It proved a perfect match. Reynolds recalled that the college offered him something even more valuable than educational opportunities — a sense of belonging, and the freedom to find and be himself among kindred spirits.

He sees his new position at Antioch as a form of paying that forward.

“We have to make sure the ground the college stands on is as solid as it possibly can be — so that we can provide this opportunity to more great kids like me longing for some place where they can be who they feel they are,” he said.