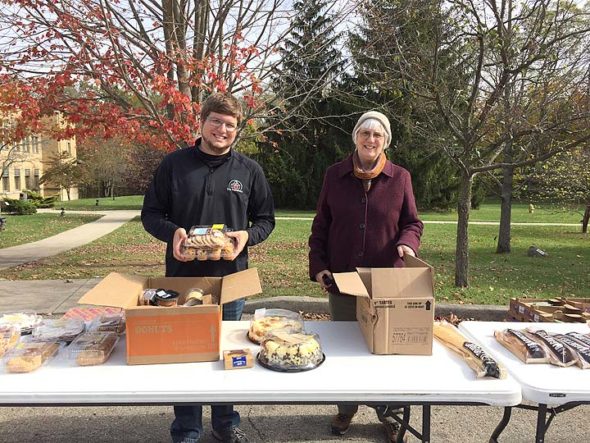 Food aid for villagers in need

Given the higher median income and sense of community that characterizes Yellow Springs, it might be hard for some to imagine that there are residents who experience what is known as “food insecurity” — limited or uncertain access to food. Food insecurity can result from a dearth of grocery stores or general economic woe, leaving individuals and families without much choice of sustenance.

In an effort to ameliorate this tragic want of food, the Foodbank of Dayton has a mobile food pantry that makes rounds to areas all over the region, including Yellow Springs. Yellow Springs families are able to take advantage of the food that the pantry offers, and several Yellow Springs residents, such as volunteer Carla Steiger, donate their time helping to distribute the food.

“People in Yellow Springs are largely unaware of how much food insecurity there is in town,” Steiger said recently.

According to a project conducted by the Foodbank of Dayton in 2015, 837 Yellow Springs residents, or approximately a quarter of the village population, were eligible for foodbank assistance. Eligibility is determined by income — individuals eligible for food have to have an income less than or equal to 200 percent of the federal poverty guidelines. The current guideline is defined as annual earnings of $11,880 or less per person, meaning that any individual earning $23,759 or less per year can take advantage of the pantry. For each additional family member, add $8,320 per year. Despite this eligibility, only around 55 Yellow Springers, or six percent of eligible residents, used the food pantry last year.

Steiger wants this figure to increase. Despite the fact that the mobile pantry has been visiting Yellow Springs since January of this year, awareness of the service in the village has not been very high. The mobile pantry visits Yellow Springs every fourth Tuesday of the month, setting up shop at 1 p.m. in the parking lot of the John Bryan Center. The next visit to Yellow Springs will take place on Tuesday, Nov. 22.

In general, the pantries try to hand out “as much produce as they can,” as well as bakery items and shelf-safe food, said Andy Macy, the Foodbank’s mobile pantry and social media coordinator. Occasionally frozen items such as meat are available as well. Last year, in Greene County, the organization gave out two million pounds of produce, and nine million pounds of food overall.

No arrangements are necessary to use the Foodbank’s mobile pantries, Macy said. Some organizations require that individuals show ID or provide proof of income, but the Foodbank pantries only ask that patrons fill out a card with general demographic data. According to Macy, it will only take around two minutes for first-time patrons to fill out the form, while patrons already in the system will be able to go through the line “in 30 seconds.”

Food insecurity is a problem that afflicts every region of Greene County and the state. Greene County is particularly susceptible to hunger for a few reasons, Macy said. On top of the relative dearth of grocery stores, the county’s rural character makes it difficult for people to shop for food, a task made even harder with the absence of a vehicle and the lack of a comprehensive county bus system.

According to figures provided by the Greene County Department of Job and Family Services, approximately 16 percent of the county population experiences food insecurity, while 7 percent experiences “very low food security,” which is an even more acute lack of food or the resources to buy it. The Foodbank said that almost 40 percent of its clients reported having to choose between paying for food or paying for utilities, while a third have to choose between paying for food and paying for rent or medical care. Forty percent of the members of the households served by the Foodbank are under 18 years old.

The mobile food pantries are designed to fill in “food gaps,” or areas where people have to travel more than three miles to access food aid. Yellow Springs is one of these areas, Steiger said. While there is a grocery store and some pantries at area churches, the amount of help available is not proportionate to the number of people who may need to take advantage of these services.

Steiger began working with the Foodbank of Dayton around two years ago, volunteering as a grant writer and contributor to the organization’s newsletter. She currently does some public relations work for the Foodbank, and works with the mobile pantry in Yellow Springs, where she helps to unload trucks and distribute the food items.

“I can’t pick up heavy things,” she said, “but I am a terrific bagger.”

The Foodbank is always looking for volunteers, Steiger said. Volunteering at one of the mobile pantry stops amounts to only an hour and fifteen minutes’ worth of work, she pointed out. And the Foodbank warehouse, on Armor Place in Dayton, is a “wonderful place to work,” she said. There, volunteers can help repack food that comes into the warehouse in bulk, put together boxes of ingredients for distribution or help package items like bookbags, when the organization provides school or winter items. The staff at the Foodbank is extraordinarily talented and caring, Steiger said, and the work is very fulfilling.

“There is a common sense of joy of being able to help with neediness,” she said. “People volunteer there who don’t have much themselves. You really see the best of humanity [in the desire to volunteer].”

Other ways to help include collecting and donating food items, Macy said, or by giving money to the organization. Every dollar donated pays for about four meals, he said. Another way to help is by spreading word of the organization, and by letting people know that mobile pantries are likely to make a stop nearby.

“Our business is to solve hunger,” Macy said. “Realistically, we know it will never end, but we want to ensure people don’t go hungry.”

Information about the Foodbank’s services can be accessed by calling 937-461-0265. The mobile food pantry’s monthly schedule can be found at thefoodbankdayton.org. Individuals interested in volunteering can call the volunteer coordinator at the Foodbank to sign up for three hour shifts during their weekday hours, Monday–Friday, 9 a.m. to 4 p.m.

One Response to “Food aid for villagers in need”