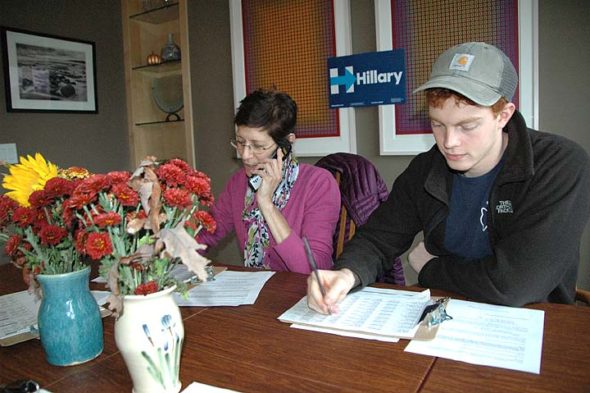 In her almost 90 years, Betty Ford has never before volunteered to help in a presidential campaign. But this year, several times a week, Ford can be found at a local home making calls to get out the vote for Hillary Clinton.

Ford is motivated to give her time because she feels strongly that Clinton is the best candidate for president.

“Hillary is definitely the most qualified,” she said. “And I think Trump is out of his mind.”

Ford was not alone in her efforts. Last Thursday the Stewart Street home was abuzz with activity, with about 12 volunteers making calls and others out in the community knocking on doors. The activity takes place every Wednesday and Thursday and on weekends, and there will be a four-day push from this Saturday through Election Day, Nov. 8, to get out the vote.

Get out the vote, early voting

Villagers interested in volunteering for Hillary Clinton over the final four-day push before the Nov. 8 election may go online to hillaryclinton.com/volunteer. Those wishing to volunteer for Donald Trump should go online to donaldjtrump.com/volunteer.

Early voting in Greene County has been “running a little bit high but not exceptionally high,” according to Assistant Director of the BOE Llyn McCoy last week. Lines are shorter during morning hours, she said.

The Stewart Street home is one of several Yellow Springs homes that’s bustled with activity several times weekly since the campaign went into full speed the beginning of September. While it’s difficult to know the exact numbers because many people volunteer repeatedly, Scott Fife, who enters data on local volunteer efforts for the Clinton campaign, estimated this week that several hundred villagers have volunteered their time. Also, he said, when he’s attended meetings at the Xenia campaign headquarters, about three quarters of those present are from Yellow Springs.

“You get a sense that folks from the village are playing a substantial role in this campaign,” he said.

Indeed, Yellow Springs has a well-deserved reputation as a liberal town, and in 2012, villagrs favored Obama over Romney 10 to one. But Republicans live here too. However, when this reporter visited the Trump headquarters in Xenia last Saturday, Carolyn Uecker, the vice chair of the Greene County Republican Party, said she doesn’t know how many villagers are volunteering for Trump, and local precinct captain Marlene Johnson didn’t return calls seeking contact with villagers working for Trump.

“There’s not many Republicans in Yellow Springs,” Uecker said on Saturday.

But there are many Trump supporters in the county, she said, and people from the seven-county surrounding area have traveled to the Xenia office to pick up signs or purchase products that support the candidate.

“We sold the last of our Trump hats today, and we can’t keep the Hillary for Prison signs in stock,” she said.

Uecker said she also gets great satisfaction in each day signing up at least one person who never voted before, but who now wants to vote for Trump.

“I love working here,” she said.

In the battleground state of Ohio, Clinton field offices appear to outnumber Trump offices significantly. There are 19 field offices in southwest Ohio alone, and the campaign hs opened about 65 offices statewide, according to a memo from Hillary for Ohio State Director Chris Wyant.

“We invested in Ohio early because we know it takes time to build an effective organization,” the memo states. “Our get-out-the-vote effort will include many more staging locations than we have staff because our campaign is powered by local volunteers.”

Greene County Trump leaders didn’t return calls seeking the number of Trump offices statewide, although in September the Cincinnati Enquirer reported that 31 offices had been opened in support of the candidate.

At the Stewart Street house last Thursday, several local volunteers talked about why they’re giving their time and energy to the Clinton campaign.

It’s not the first time that Luan Heit, a retired teacher, has volunteered in a presidential campaign — she worked for Clinton in 2008, then for Obama after he won the nomination.

Heit sees a stark difference between the candidates.

“She’s worked very hard her entire adult life making things better for other people, and he’s worked to make things better for himself and his family,” she said. “And I think it’s very important that Clinton be choosing the next Supreme Court justice. That’s my main issue.”

Heit spends many hours weekly on the campaign, making calls nightly to remind volunteers to come in, then trying to get out the vote during the week and on weekends.

“It’s almost all I think about anymore,” she said.

Villager Karen McKee is also a veteran of Democratic political campaigns, having volunteered for Obama. McKee, who was also making calls to get out the vote on Thursday, worries that enthusiasm among Democratic voters isn’t running as high this time around as it did then.

“A lot of people are planning to sit it out,” she said. “The momentum isn’t what it was.”

But McKee believes strongly in the importance of Clinton winning this election.

“I’m very concerned, very, very concerned,” she said, by the possibility of Trump being elected. “We need to protect the integrity of the political process.”

For villager Mary Donahoe, who was directing last Thursday’s volunteer efforts at the Stewart Street home, the election of the country’s first woman president is hugely important.

“I’m of the Gloria Steinem generation. I’ve been supporting Hillary for a long time,” she said. “For me, she represents a woman who refuses to be put down, whether by a boss or a colleague or a teacher or another powerful figure.”

Much of the criticism against Clinton strikes Donahoe as coming from misogynistic attitudes, attitudes with which, as an older woman, she feels very familiar.

“It feels like her battles are my battles,” she said.

Donahoe has put in about 15 hours weekly, maybe more, on the Clinton campaign, and will do more in the final stretch.

“I’m spending as much time on this as I can,” she said. “It helps me sleep at night.”

Also working last Thursday were Virginia Caudill, a retired government worker, and Karen Kimber, a retired Wright State University librarian. Both were working on their laptops entering data for the campaign.

“I look at this as my civic duty,” Caudill said. “If you don’t help out, you don’t get to complain about the results.”

While most of the volunteers working for Clinton last week at the Stewart Street home were women over 50, Nick Barton, 21, of Xenia, challenged that trend. A student at Swarthmore College, Barton is taking advantage of his “gap semester” to go door to door or make phone calls almost full-time for Clinton, on top of a full-time job at Dorothy Lane Market in Dayton.

Barton supports Clinton mainly because he cares strongly about electing a woman as president, he said, citing the influence of his mother, a scientist who has endured longtime sexism in her profession. And while Clinton’s support of women’s issues has earned her some support from his peers, Barton feels discouraged that young people in general seem apathetic about the election.

But while many of his peers don’t share his enthusiasm for Clinton or the political process, Barton feels inspired by those he meets working for the campaign.

“I believe in virtue and justice and believe that electing Hilary will make a world that’s more just,” he said. “And being around these people gives me a lot of joy.