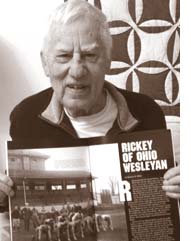 On Sunday, Nov. 27, 2016 Richard David Miller, recently of Yellow Springs, passed away at the Friends Care Center after a brief convalescence. Family and friends were grateful that up until the very end, Dick kept three of his most important attributes — a good appetite, a deep and abiding love for his wife, and a great sense of humor.

Born in Cincinnati, Ohio, the youngest of three, Dick grew up in a loving devout Presbyterian family, spending summers working at his father’s print shop in downtown Cincinnati. As a boy growing up in Cincinnati, Dick became a devout Reds fan — an affliction he never overcame.

Dick excelled in pretty much everything he did — sports, academics and leadership. He was senior class president at Withrow High School and president of his Phi Gamma Delta brothers at Hanover College. Towards the end of his Air Force career, he was honored to serve with the US Chief of Chaplains Office in Washington, D.C.

During his last year at Princeton Seminary a friend suggested he enter the military service as a chaplain — the best decision he ever made, taking him and his family on assignments around the world including Germany, Japan and Greece and around the country from New York to Alabama to Washington D.C., landing him finally at Wright-Patterson Air Force Base.

During the Vietnam War, Dick was stationed in Da Nang ministering to the troops and assisting the local orphanage. He earned high honors for his military service, including the Legion of Merit, three times. But his most prized award came upon his retirement — from Bowie Kuhn, Commissioner of Baseball, a signed baseball with the inscription: “To Chaplain Richard Miller, a great fan of baseball as well as God.”

The family requests that anyone wishing to honor his memory consider a donation to the Friends Care Community: 150 E Herman Street, Yellow Springs OH 45387

3 Things I Learned from my Dad

Call everyone “Sir,” not just your superiors.

Our family grew up in the Air Force, w here titles were important, and our fathers were trained to address their superiors as “Sir” to ensure respect and discipline along the chain of command. One of my lasting memories from early childhood was anchored in a question I asked my mom, “Why did Daddy call that man Sir?” The man I was referring to was someone simply doing his job, and not a military officer. My mom replied, “Your father calls every man ‘Sir.’”

This was part of an overall philosophy of treating others with kindness and respect, particularly those who are not so privileged. Another very early memory is from Chanute AFB Illinois in the mid-’60s, when I woke up Saturday morning excited to see cartoons in the basement. I discovered that there was a family in the basement that Dad had taken in the previous night. That’s all I needed to know, but little did I know at the time that watching Superman that morning in the basement with some kids I had never met before would be such a valuable lesson in connecting to people who are different.

Why just walk when you can run?

One day Dad parked the station wagon, we hopped out and he just started running, so I did too. This seemed completely natural to me and furthermore made a lot of sense. Why walk when you can run? To this day I often run in situations that call for adults to be walking, and to a certain extent have passed this along to my family. I learned that choosing to run is connected to choosing to be different, and choosing to be different is a path to a much more rewarding and interesting life.

Dad chose running over walking in many aspects of his life. He did not settle for the default life or career and was quite proactive in both creating unique roles for himself, such as his “Late Show Review” film-discussion show on a local TV station, and seeking out arts and culture and sharing it with his family. I have so many great memories of going out to see the world, from cool exhibits at Expo-67, to driving across Florida causeways to Reds spring training games, to seeing “2001: A Space Odyssey” at Radio City Music Hall — all part of our childhood education.

Lead by showing over telling, listening and understanding over lecturing

Part of Dad’s role as a minister was to deliver sermons, but his sermons were not at all of the “fire and brimstone” variety, and more like the style of a college professor. His approach to leading and parenting included much more showing us how we can live our lives, than telling us how we should.

One example of showing us a different world and way of thinking happened one Sunday morning in Syracuse, when Dad announced that we did not have to go to church that day if we spent that time doing something different at home (all to my delight). So we watched the film “Green Pastures” which depicted Heaven as populated exclusively with black folks. I learned a great deal that morning, much more than I would have if we had gone to church. Little did we know at the time that we would be heading into ground zero of the civil rights movement, as we moved to Montgomery, Ala., months later.

Dad rarely yelled, but he did make you think about the deeper meaning of a particular childhood transgression. That usually seemed to work.

Dad allowed us each our own path, but he set the foundation for whatever path we chose to take and he did not insist on any specifics. His open mind was both nurturing and inspirational.

Dad taught me how to pitch by simply handing me the ball and squatting in a catcher’s stance many, many times. I fully appreciated this preparation as I stood on the mound, pitching the first game of the little league season in Alabama, doing things I had never done before, having the confidence to try and do many more things later in life.