To Trump from you, via WYSO

If you could tell President-elect Donald Trump anything, what would it be? 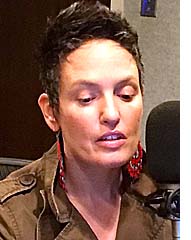 WYSO (91.3-FM) has launched a new initiative seeking responses to that basic question. As the new administration prepares to take office in January, the locally based National Public Radio affiliate wants to hear, in 300 words or less, what you would like Trump to know — about yourself, your family, your community.

The new project is called “Dear Mr. President,” and the station plans to air as many of the recorded letters as possible in the days after the Jan. 20 Inauguration. A Web page is being developed as well to feature a wider selection of submissions,

Station Manager Neenah Ellis said the idea for the project came out of a staff meeting a week after the election, which if nothing else made clear that a large swath of people in the country feel unheard and forgotten by the powers that be. “Our mission here at public radio is to give voice to the public,” Ellis said. “We all talked about what we could do to get more voices on the air.”

“Dear Mr. President” is meant to give people a platform to speak from their own life experiences, said Jess Mador, the station’s new managing editor, who is leading the initiative.

“Many people are talking about how we are so divided,” Mador said. “The election was so contentious.” The new project offers a forum to hear one another.

How it works: Write a letter. Record it. Submit the recording with a photograph of you holding your letter.

The only parameters are that the letter be no longer than 300 words, and the recording be about 90 seconds. Station staff is happy to help if you need assistance recording or submitting, Mador said. Video submissions are welcome as well, she added. “We’re hoping to make this project as multi-platform, multi-media as possible.”

What you say is up to you. “It doesn’t have to be about politics,” Mador said. “We want to let people tell us what they want to tell us.” At the same time, “we’re hoping people will be civil and thoughtful,” in the same vein as NPR’s “This I Believe” series of personal essays.

The station is seeking “a broad cross-section of people from across our area — all walks of life, all ages,” Mador said. Toward that end, they’re exploring a variety of ways to reach out into the community through partnerships with other groups or agencies. They’re talking, for example, with area libraries about finding ways to engage their patrons in the project. One thing is certain, said Mador: “We want to make it as easy as possible.”

Mador, who came to the station in October — filling the vacancy left when Lewis Wallace joined the nationally syndicated NPR program “Marketplace” — has experience in such community-engagement radio projects. Her most recent endeavor was producing a project called “TruckBeat” in Knoxville, Tenn., part of a 15-city “Finding America” initiative by AIR (American Independent Radio).

“The idea was to take public radio outside the walls of the station to new corners of the community, where their stories are not often heard. … My particular project was about health — community health.” A focus, she said, was on the health disparities in Eastern Tennessee and Southern Appalachia, such as opiate addiction, access to care, mental health issues, obesity. “Over the past year, I’ve had the opportunity to experiment and try new things,” she said.

Before she went to Nashville, she spent more than eight years in the Twin Cities, both as an independent radio journalist and working with Minnesota Public Radio. She has a master’s degree from the Columbia University Graduate School of Journalism, and spent a couple of decades in New York City, which she said she considers her hometown.

She said she is excited to come to WYSO, where community engagement is so important. “We want to expand on that,” she said.

“We want to tell stories where people are front and center. As journalists, we’re good at telling what issues we think are important to people. We need to listen more to people sharing their thoughts with us.”

The “Dear Mr. President” project is one way of doing that.

One Response to “To Trump from you, via WYSO”