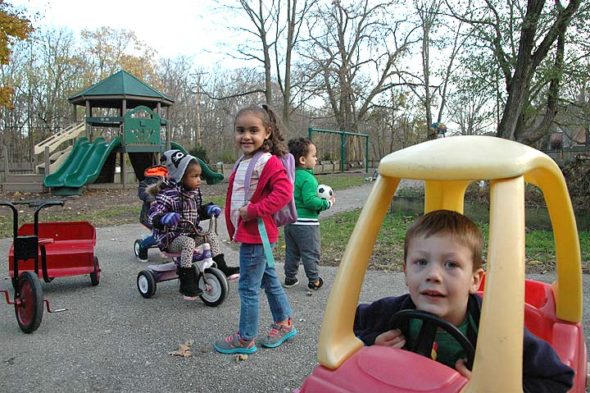 When Mary Stukenberg became interim director of the Yellow Springs Community Children’s Center last November, she stepped into a tough role at a tough time. The 70-year-old village institution, which provides education and childcare to toddlers through elementary school-aged children, was rocked by declining enrollment, staff turnover and the abrupt departure of a new director after just three months on the job. (photo by Audrey Hackett)

When Mary Stukenberg became interim director of the Yellow Springs Community Children’s Center last November, she stepped into a tough role at a tough time. The 70-year-old village institution, which provides education and childcare to toddlers through elementary school-aged children, was rocked by declining enrollment, staff turnover and the abrupt departure of a new director after just three months on the job. Stukenberg herself had left the Corry Street facility weeks before, following six months in a teaching position there. As interim director, her first days were no picnic, she confessed in a recent interview.

“We had three lawsuits and lice on day one,” she said.

But a year later, with lawsuits and lice behind her, Stukenberg is hitting her stride. And so is the organization she now leads as full-fledged director, a status the center’s board made official this summer.

“The Children’s Center has turned around, and Mary is a big part of that,” Board Member Rodney Bean said this week.

Enrollment is up, new teachers have been hired, finances are stabilizing, the curriculum is rich with learning opportunities and morale is vastly improved, according to both Bean and Stukenberg. The facility even has a fresh coat of paint and a badly needed new commercial oven.

“We’ve fixed the things that were broken,” said Bean, whose own children attended the center decades ago. “Our challenge now is rebuilding numbers.”

According to the center’s most recent filings with Ohio’s job and family services department, which licenses and oversees child care facilities in the state, total enrollment currently stands at 87 children — 34 in the toddler and preschool program on site, and 53 in the afterschool program, held at Mills Lawn School. By contrast, last November there were just 13 young children enrolled, with an additional 21 school-aged children in the afterschool program.

Over the summer, there was a surge of interest in the center, bringing enrollment to its current level, which is still below the 80 preschool children the facility can accommodate on site. “The need is very strong,” Stukenberg said. “As soon as the news was even remotely favorable, parents just started pouring in.”

Thea Tremain was one of those parents. She had some concerns about the center based on what she’d heard regarding enrollment declines and financial problems. But having grown up in Yellow Springs, she had always thought of the Children’s Center as a “nice, safe place for kids, a place with history,” and so she explored it for her young son, ultimately enrolling him there in July.

“It’s been phenomenal for us,” she said recently, explaining that center teachers helped identify her son’s sensory integration issues, leading to assessment and appropriate supports. And Stukenberg has been no less attentive to his needs, she said. “Miss Mary will tell us he had a great day. She always knows all the details.”
The attention and kindness of center staff has been a constant through recent turmoil, according to Jennifer Brown, whose preschooler has been enrolled at the Children’s Center for three years. “The staff is very caring,” she said.

Several parents interviewed credited Stukenberg with turning things around. “Miss Mary is absolutely wonderful,” said Lisa Terrell, whose two daughters just aged into the afterschool program. “Things were a bit chaotic in between, but she has made such a difference,” Terrell said, citing better communication with parents and the center’s increased visibility and involvement in the wider community.

But Stukenberg herself turned the compliment back on Yellow Springs. “People bring donations almost daily. People call, saying, ‘I have this skill to share,” she said. “I’ve been knocked down by people’s caring.”

As enrollment has grown, so has tuition revenue. The day is “within sight” that tuition will support the center’s basic costs, according to Bean. He hastened to add that the center will “still need community support — we always have and always will.” With the hope of broadening its donor base, the board is launching an annual appeal in a few weeks. Stukenberg noted that private donations remain a critical source of revenue. Local philanthropists Richard Lapedes and Maureen Lynch, who stepped in when the center began experiencing financial troubles several years ago, continue to provide substantial support.

Serving more children also means hiring more teachers, and the teaching staff, including the afterschool program, has grown to 10, up from six last fall. Four of those are veteran staff, having taught at the center or its afterschool program from three to 20 years, while the rest are new. The organization also lost five teachers in the past year. “This is a rocky business,” Stukenberg acknowledged.

Most of the teachers hired are young and new to teaching. “We’ve hired by will, not skill,” Stukenberg said. “The teachers we have now are intuitively gifted. They’re quite extraordinary.” The Children’s Center provides training to develop teachers’ innate abilities and satisfy state requirements. In January, it will submit an application to Step Up to Quality, a state program, seeking to regain the “one star” rating it lost through a previous failure to reapply.

Earning that and additional stars will be meaningful, said Stukenberg, but the center aims to do more than fulfill state requirements.

The educational program is what distinguishes the Children’s Center from daycare, according to Bean. The center seeks to align with local curriculum and prepare kids for elementary school and beyond, he explained.

To that end, the center involves children in a range of activities, drawing on the resources within and near the village. In the past year, for example, children have taken art classes with local artist Alice Robrish and the staff of John Bryan Community Pottery. They’ve learned about the natural world from Boonshoft Museum educators, not to mention their own weekly walking explorations of Glen Helen. They’ve learned sign language and games played by Native American youth, thanks to former Antioch College Miller Fellow Mallory Drover. They’ve met musicians as diverse as a cellist, trombonist and Native American flute player. And they’ve raised funds for the Ocean Conservancy and for protestors at Standing Rock, in both cases selling their own handmade goods from a wagon downtown.

Threaded through all this is play, individual attention and kindness, according to Stukenberg.

“We want kids to develop their enthusiasm and their passions, their curiosity and their autonomy. We want them to develop a sense of community — how to take care of one another,” she said.

On a recent Friday evening, about 40 children, parents and staff gathered at the Children’s Center after dark. Everyone carried lanterns cut from plastic milk jugs. The children’s lanterns held light sticks; the adults’ lanterns were illuminated by real flames from small candles. The group formed into a line two and three across. Down Corry Street and into the center of town the lantern-holders walked. Lanterns bobbed, a few went out. The procession continued.

The recent Lantern Walk revived an annual Children’s Center tradition, according to Stukenberg. The children and adults walked through the heart of the village with excitement and joy, as well as moments of solemnity and a few stumbles. It seemed a metaphor for childhood, and perhaps for the Children’s Center itself. 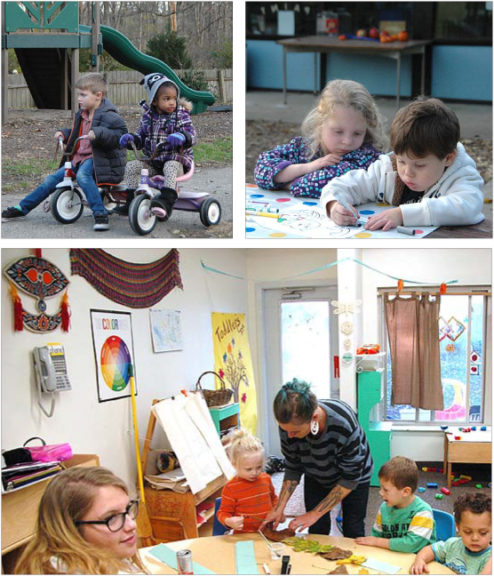 top left: Ryland Fain and Kyla Randolph recently enjoyed a ride in one of the center’s outdoor play areas. top right: Lilly Brown and Jordan Andrade played quietly at the picnic table outside, bonding over art. above: The Children’s Center has hired several new teachers this year. Pictured here guiding the kids in making “leaf crowns” from leaves gathered outside are teachers Logan Rapp (seated) and Ashley Ark, with, from left, August Frederick Townes Luckett-Maus, Juna Grzelak and David Carlson. (All photos by Audrey Hackett)